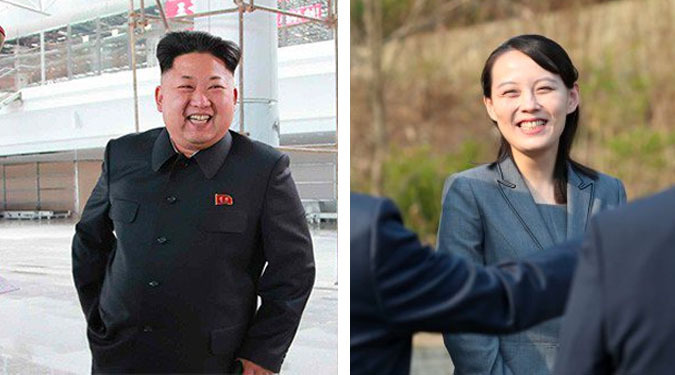 Amid high security, North Korean leader Kim Jong Un and his sister Kim Yo Jong flew into Singapore for Tuesday’s summit with the United States on separate flights, photos and reports indicated on Sunday.

Kim Jong Un arrived in Singapore’s Changi Airport on a VIP-capable Air China 747-400 from Pyongyang at around 3.15pm, with pictures showing his armored Mercedes Benz limousine collecting him directly on the tarmac.

Kim followed the touch-down of an Air Koryo IL-76 cargo plane earlier in the day, which had refueled in Guangzhou en route from Pyongyang, photographed by the AP unloading his armored Mercedes shortly after landing at Changi.

But while Kim was pictured being greeted by Singapore’s foreign minister upon arrival, his sister Kim Yo Jong touched down in Singapore about an hour later on a state-owned IL-62M aircraft, flight tracking data and reports showed.

Flight Radar 24 data said that her IL-62M plane was Air Koryo’s P-885 aircraft, but the plane which actually arrived in Singapore was in state livery, likely Kim Jong Un’s personal P-618 jet, used by his sister to visit Seoul earlier this year.

The confusing open source indicators and fact the DPRK spread its arrivals over three aircraft on Sunday – as well as by flying an Air China A330 to Singapore on Saturday – suggest major efforts were made to ensure the highest security levels for senior leadership.

“The U.S. president and vice president don’t generally travel on the same plane,” said North Korea researcher and Sino-NK editor Christopher Green on Monday. “That is for reasons of security and continuity of government.”

“North Korea has its own royal lineage — the Kim family — and so it is natural that Kim Yo Jong traveled to Singapore separately from her brother.”

While some reports indicated at least one of the North Korean aircraft to have returned to the DPRK, NK News observed two DPRK planes parked at a remote stand at Changi shortly after arriving in Singapore at around 8pm local time.

Meanwhile, it’s possible the arrival of Kim Jong Un in an Air China aircraft could raise eyebrows from some in North Korea, where state propaganda has long promoted self-reliance, especially for such a high-profile event.

“I don’t doubt that in an ideal world, Kim would have arrived in Singapore on his private jet,” Green said.

“For the purposes of a KCTV documentary if nothing else, that would have been the ideal scenario. But if the authorities really do think it is problematic to have Kim stepping from an Air China plane on arrival, they can always edit in his private jet, which handily also made the trip carrying Kim’s sister.”

But Green added that because North Korea – China relations are currently good, “in some senses it is beneficial to highlight that fact.”

Amid high security, North Korean leader Kim Jong Un and his sister Kim Yo Jong flew into Singapore for Tuesday's summit with the United States on separate flights, photos and reports indicated on Sunday.Kim Jong Un arrived in Singapore's Changi Airport on a VIP-capable Air China 747-400 from Pyongyang at around 3.15pm, with pictures showing his armored Mercedes Benz limousine collecting him