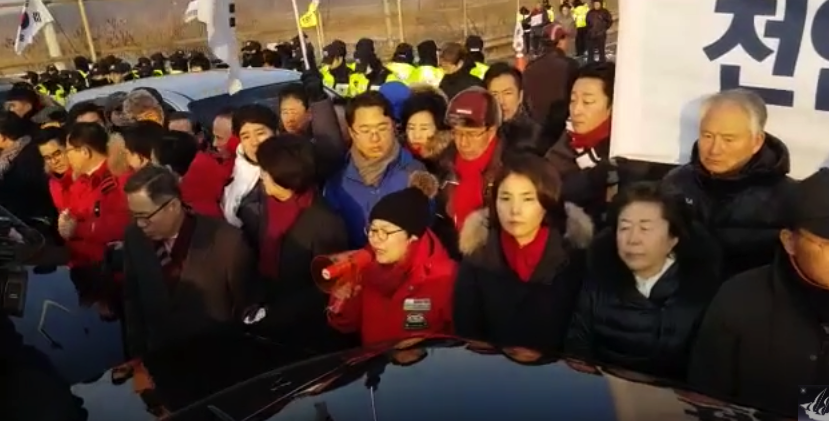 Lawmakers from South Korea’s main opposition party Liberty Korea failed to prevent the arrival of a North Korean Winter Olympics delegation led by General Kim Yong Chol after leading a protest at the Unification Bridge on Saturday and Sunday.

The sit-in protest, which was conducted at a location Kim’s delegation would normally have to pass after crossing the overland border on Sunday morning, was organized due to his alleged involvement in the orchestration of the sinking of South Korea’s Cheonan naval corvette in 2010.

“Kim Yong Chol, the murderer who killed so many of our people, can never step on Republic of Korea soil,” Chang Jae-won, senior spokesperson of the Liberty Korea party said on Saturday about the protest.

“They need to step on us first if they want to step on to the land of the Republic of Korea,” he continued. “Now we will be the human shield … to stop Kim Yong Chol’s visit to South Korea.

Pictures and video posted to social media showed the protest kicking off late on Saturday afternoon, with lawmakers and up to a hundred others camping out overnight to man a roadblock on the bridge through Sunday morning.

As the time of the delegation’s arrival got closer, a security presence there was increased to a total of 2,500 police, South Korea’s Yonhap News said on Sunday, though there was notably no effort to remove the protestors.

But while local media said Kim’s delegation crossed the border at around 9.49am on Sunday, their convoy of vehicles was reported to subsequently follow a different route after border processing in order to avoid coming into contact with the protestors.

The sit-in protest at Unification Bridge followed another on Saturday when relatives of those killed during the sinking of the Cheonan took to the streets at Gwanghwamoon to complain about the impending arrival of the North’s delegation being led by Kim.

“Execute Kim Yong Chol,” a group of about 30 relatives chanted according to AFP on Saturday. “North Korea, accept the responsibility for the atrocity and apologize.”

“As you know, Kim Yong Chol himself visited Panmunjom before,” said T.K. Park of the ‘Ask a Korean’ website. “South Korean conservatives didn’t say a peep then.”

“Choe Ryong Hae and Hwang Pyong So were in Incheon,” he added — referencing the high profile arrival of a North Korean delegation for the Aisan Games in 2014. “No complaints then either.”

46 South Korean sailors died when the Cheonan was sunk after being struck in 2010 by what was claimed to be a North Korean torpedo, an incident that Pyongyang has always denied responsibility for.

Lawmakers from South Korea's main opposition party Liberty Korea failed to prevent the arrival of a North Korean Winter Olympics delegation led by General Kim Yong Chol after leading a protest at the Unification Bridge on Saturday and Sunday.The sit-in protest, which was conducted at a location Kim's delegation would normally have to pass after crossing the overland border on Sunday morning,