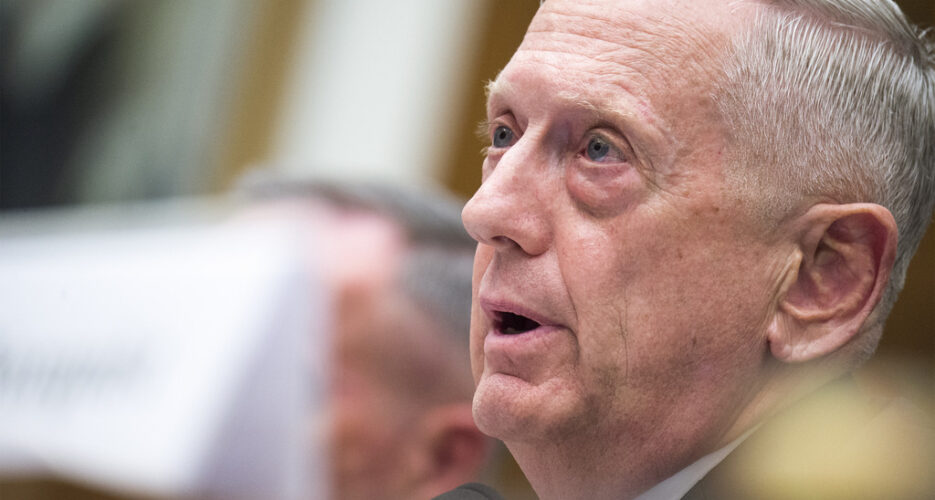 U.S. Secretary of Defense James Mattis on Sunday said Washington’s military response would be “massive” if North Korea threatened the United States, Guam or its allies.

The comments follow a successful North Korean nuclear test which took place in the early hours of Sunday morning (EST). The DPRK claimed it detonated a hydrogen bomb small enough to be mounted on a missile.

“Any threat to the United States or its territories including Guam or our allies will be met with a massive military response—a response both effective and overwhelming,” Mattis said at the White House.

“We are not looking to the total annihilation of a country—namely, North Korea. But as I said, we have many options to do so.”

The Secretary of Defense was at the White House in order to discuss the test with U.S. President Donald Trump, Chief of Staff John Kelly, and other military figures, according to a tweet from Trump earlier in the day.

“Mattis seems to be informing North Korea – and others – that the U.S. currently has no plans to ‘annihilate’ North Korea but that does not mean the US lacks the capability to do so,” director of intelligence John Grisafi said.

“This seems like a fairly standard day-one reaction, using meaningful terms but not really giving new information or clearly defined specifics about what the U.S. will do next.”

The RAND Corporation’s Bruce Bennett told NK News that there remained a possibility that the U.S. might pursue some kind of military action against North Korea.

“The Trump Administration could announce that it is prepared to intercept future North Korean missile tests, when feasible,” Bennett said. “It could also announce more intrusive reconnaissance efforts against North Korea, including seeking to constantly know the location of Kim Jong Un.”

“If the United States wants to rein-in the North Korean nuclear weapon and missile programs, it needs to convince Kim Jong-un that the things he cares about (mainly regime survival) are jeopardized by his bad behavior—only then is he likely to be prepared to compromise.”

Following the meeting with military officials, the President said “we’ll see” when asked if Washington was considering military action in response to the North’s sixth nuclear test.

Trump also earlier said over social media that the U.S. was mulling ceasing trade with countries that did business with North Korea, a move that would halt commerce with China and numerous other major trade partners.

North Korea in a special broadcast at 1500 Pyongyang time confirmed Sunday’s test as having been of a hydrogen bomb designed to be used on an intercontinental ballistic missile (ICBM).

Announcer Ri Chun Hee read a statement from the Nuclear Weapons Institute of the DPRK regarding the “perfect success” of a “hydrogen bomb for intercontinental ballistic rocket.”

South Korean President Moon Jae-in has ordered the “strongest” response to the test, which was reported to have been a 6.3 magnitude seismic event taking place at 1200 Pyongyang time.

U.S. Secretary of Defense James Mattis on Sunday said Washington's military response would be "massive" if North Korea threatened the United States, Guam or its allies.

The comments follow a successful North Korean nuclear test which took place in the early hours of Sunday morning (EST). The DPRK claimed it detonated a hydrogen bomb small enough to be mounted on a missile.