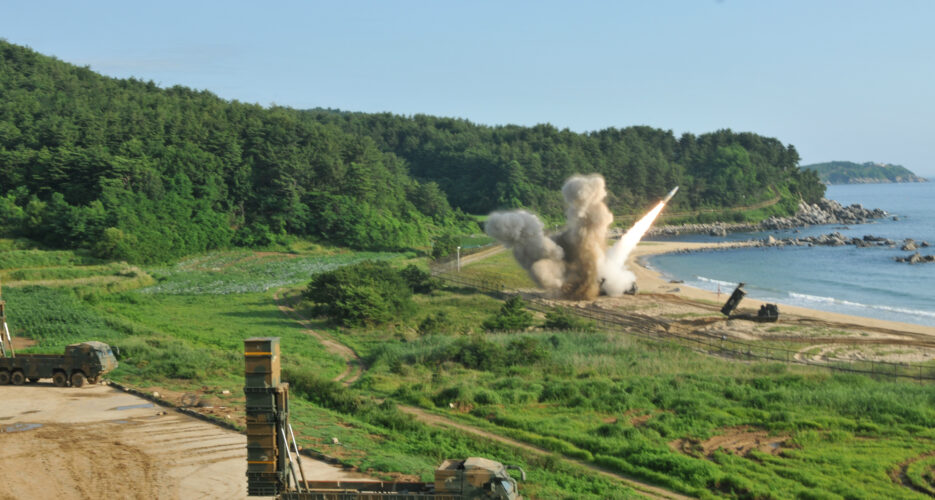 The South Korean presidential office said President Moon Jae-in had ordered the joint military drills as a “show of force” after North Korea’s successful test of an ICBM on Tuesday.

“It’s not a situation that we respond to North Korea’s grave provocation only with a statement but it is necessary to show our firm combined readiness posture concerning missiles,” Blue House spokesperson Yoon Young-chan said in a statement, quoting President Moon as saying.

The South’s Joint Chiefs of Staff (JCS) said the missile units of the Republic of Korea (ROK) and the U.S. had conducted a combined ballistic missile exercise on the east coast of South Korea at 0700 KST in response to North Korea’s “repeated ballistic missile provocations.”

Military authorities said it was a “strong warning message from the ROK – U.S. Alliance against the North’s provocations.”

The Eighth U.S. Army also said in a written statement that the combined exercise was intended to “counter North Korea’s destabilizing and unlawful actions on July 4.”

The U.S. and the South military fired a barrage of missiles, including the South Korean-produced Hyunmoo-2 ballistic missile and the U.S. ATACMS (Army Tactical Missile System) surface-to-surface missile (SSM) into the territorial waters of South Korea along the east coast, according to the Eight U.S. Army and JCS.

“The system can be rapidly deployed and engaged. The deep strike precision capability enables the ROK-U.S. Alliance to engage the full array of time critical targets under all weather conditions,” the Eighth U.S. Army said in a statement.

Gen. Vincent K. Brooks, Commander of Combined Forces Command, was quoted as saying by U.S. Forces Korea (USFK) that “self-restraint” on the part of the ROK-U.S. alliance was “all that separates armistice and war.”

“As this Alliance missile live fire shows, we are able to change our choice when so ordered by our Alliance national leaders,” he added. “It would be a grave mistake for anyone to believe anything to the contrary.”

The South’s JCS also said the drills showed Seoul’s “strong determination” to not to “tolerate any provocations by North Korea.”

“By hitting the target at the first round, [the South and the U.S.] show off the capabilities of launching a surgical strike against the enemy’s leadership in case of contingency,” JCS said in a written statement.

The South said that the army maintains “firm military readiness” and “can immediately punish” Pyongyang.

“If North Korea threatens the safety of our people and the ROK – U.S. Alliance with nuclear and missile threats, the leadership of the North Korean regime will be ruined,” an unnamed South Korean commander said in the statement.

The Blue House added that U.S. President Donald Trump had given approval for the exercise through his National Security Adviser H.R. McMaster.

“I highly regard and sympathize with President Moon’s firm determination against North Korea’s provocations,” Yoon said, quoting Trump as saying.

North Korea announced on Tuesday afternoon that the country had successfully test-launched an intercontinental ballistic missile (ICBM) that morning.

The rocket, which North Korea has named “Hwasong-14”, flew 933 km at a maximum altitude of 2802 km for 39 minutes and was launched at a lofted trajectory at 09:00 local time from the DPRK’s northwest, Pyongyang reported. It then fell into a targeted point in the Sea of Japan (also known as the East Sea).

The South Korean presidential office said President Moon Jae-in had ordered the joint military drills as a "show of force" after North Korea's successful test of an ICBM on Tuesday.