Why Beijing opposes THAAD deployment in South Korea
China's opposition to the missile defense system is a cynical ploy for the domination of East Asia
Daniel Pinkston March 9, 2017 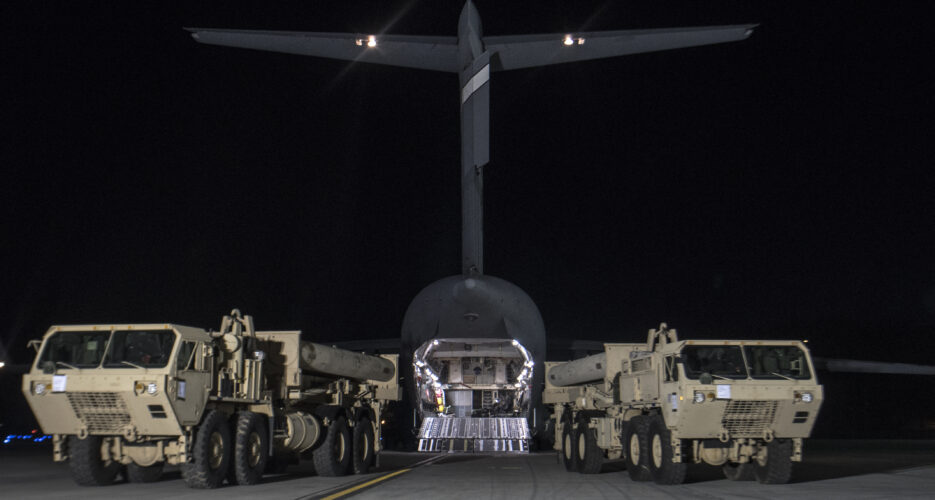 China’s opposition to the deployment of a THAAD (Terminal High Altitude Area Defense) system on the Korean peninsula is well documented. Beijing’s opposition increased over the last year after Seoul and Washington began discussions over THAAD in early 2016, and China’s rhetoric intensified after the two decided, in July 2016, to deploy the missile defense system.

Kim Jong Un’s New Year’s announcement that Pyongyang would soon test an intercontinental ballistic missile (ICBM) and the flight test of a new missile system, the Pukkŭksŏng-2, on 12 February probably led to a decision to airlift the first THAAD systems and components during the night of 6-7 March.

Although a coincidence, the timing could not have been better, coming less than 24 hours after the KPA conducted a live-fire ballistic missile exercise that simulated a missile attack against U.S. military bases in Japan.

China’s response to the THAAD deployment was swift and disproportionate. North Korea launched three missiles into Japan’s exclusive economic zone (EEZ) on Monday, but state media such as the Global Times have focused more criticism against South Korea. The Chinese government has banned group tours to South Korea and has been harassing Korean firms, especially Lotte, which has invested $8.7 billion in China but agreed to a land swap with the ROK government for the THAAD battery site.

METHOD BEHIND THE MADNESS

China’s rhetoric and behavior over a THAAD missile defense battery may seem irrational and unwarranted. Many people might be puzzled why Beijing would become hysterical over this system and issue threats against Seoul, risking China’s global image and reputation. Chinese strategists and the People’s Liberation Army (PLA) experts are fully aware of THAAD’s capabilities and they know that THAAD and its radar does not pose a threat to China’s national security and strategic deterrent.

Beijing’s veiled threats against Seoul are not because of THAAD. The truth is that THAAD is a proxy or focal point for China’s effort to undermine the East Asian security architecture and to reconstruct it after the termination of the San Francisco Treaty system.

That would mean no U.S. military bases in East Asia, and no U.S. bilateral security treaties with South Korea, Japan or other countries in the region. China does not care about THAAD per se, but China is opposed to the U.S. regional presence and American security cooperation with China’s neighbors.

With a U.S. withdrawal, China could create its own hub-and-spoke system whereby Beijing could “divide and conquer” the smaller nations around its periphery. The result almost certainly would not be a multilateral collective security institution, but a regional hegemonic system with Beijing in the driver’s seat.

While this is China’s preference, it is suboptimal if not a nightmare for South Korea and other medium powers in the region. China’s vehement denouncement of THAAD reveals Beijing’s preferences regarding the security architecture but China does not offer any plausible measures in place of THAAD to address Seoul’s legitimate security concerns. Without mentioning it explicitly, China’s recommendation is to bandwagon with China after the U.S. is gone.

That means the South China Sea will become a Chinese lake, and the PLA Navy will dominate the waters out to the second island chain. It will only be a matter of time before the Republic of China goes into the dust bin of history and Taiwan is a PRC province – regardless of what the people of Taiwan desire.

Since the Asian financial crisis twenty years ago, East Asians frequently have questioned the American commitment to the region. Many believed the Clinton administration did not do enough to help stop the contagion of financial distress that began with the collapse of the Thai baht in July 1997. The Bush administration was viewed as being distracted by the Global War on Terror (GWOT), as it generally neglected other issues important to Southeast Asian countries. The Obama administration sought to rectify this by implementing “the pivot” but self-inflicted wounds and unforced errors have weakened the U.S. position in East Asia.

American allies, friends, partners, and foes in the region viewed the federal budget sequestration in absolute disbelief. Now the Trump administration’s withdrawal of the Trans-Pacific Partnership (TPP) has signaled that the U.S. is no longer interested in being economically engaged, and effectively has ceded responsibility for rule-making and governance to China. Trump’s torpedoing of the TPP could end up as one of America’s greatest strategic blunders.

China sees an extraordinary opportunity to exert itself and displace the U.S. alliance system

Nominally, the U.S. remains committed to its alliance partners – at least through inertia. But is the San Francisco Treaty sustainable? Despite extensive security commitments and economic ties, most Americans seem disinterested in East Asia. At least America’s cultural, racial, and religious ties are not commensurate with the level of security and economic links. News coverage and political discourse are generally shallow; East Asian issues have not been the subject of recent U.S. presidential campaigns.

Secretary of State Tillerson is scheduled to visit Japan, South Korea, and China next week, but the State Department appears to be weakened and underperforming, with several senior positions still vacant. Hopefully, the Tillerson visit will be productive, but even the most seasoned diplomat with the most capable support team would be extremely challenged by the current situation. But with Tillerson’s inexperience and the White House goal of “deconstructing the administrative state,” expectations are very low.

As the executive branch of the U.S. federal government is embroiled in turmoil and distracted by bizarre conspiracy theories and “making American great again” through neo-isolationism, China sees an extraordinary opportunity to exert itself and displace the U.S. alliance system and “make China the hegemon again” in East Asia.

If Seoul caves into Beijing’s pressure and withdraws THAAD, the U.S. ability to fulfill its security treaty commitments would be undermined, leaving South Korea more vulnerable to coercion.

If the U.S. cannot fulfill its security commitments and provide extended deterrence to allies, it could be the beginning of the end for the San Francisco system. With the U.S. no longer engaged as a security actor in the Indo-Pacific region, the region’s middle powers will be faced with the dilemma of forming a balancing counter-coalition against China, or bandwagoning and effectively handing the region over to Chinese hegemonic governance without a shot being fired.

China’s opposition to the deployment of a THAAD (Terminal High Altitude Area Defense) system on the Korean peninsula is well documented. Beijing’s opposition increased over the last year after Seoul and Washington began discussions over THAAD in early 2016, and China’s rhetoric intensified after the two decided, in July 2016, to deploy the missile defense system.North Korea’s fifth