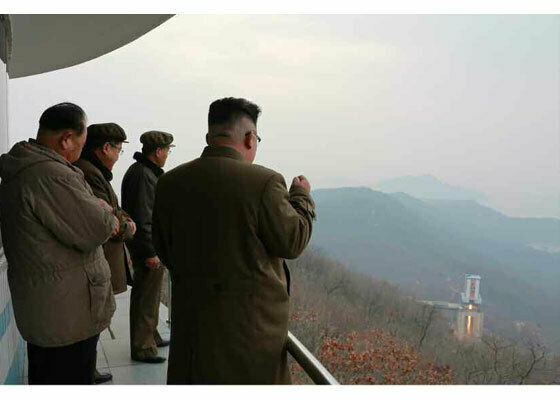 State media said the newest engine was “another miracle” in the history of the country’s national defense industry, and that it used a much higher thrust compared to previous models.

“Kim Jong Un have inspected the our-style high power engine that the Academy of the National Defense Science has newly developed,” KCNA said, adding the test was held at the Sohae Satellite Launch Station, more commonly known as the Tongchang-ni launch site.

“Today will be the unforgettable day for the DPRK’s rocket development history,” KCNA continued, saying the test may even be called the March 18 Revolution (318혁명).

“This successful test has completely got rid of the dogmatism, conservatism, formalism and dependency on imitating other nations’ technologies.”

Kim Jong Un’s observation of the latest test came a day after U.S. Secretary of State Rex Tillerson said that military action against North Korea is “on the table,” and on the same day that Tillerson met his Chinese counterpart, Wang Yi, in Beijing, as part of his first tour of East Asia in the job.

In its Saturday KCNA statement, the DPRK hinted that “the world will soon see, what our grand success we have accomplished today,” adding that the successful development of this new high thrust engine has brought the country’s level of space development on par with other nations.

“Today’s historical launch has announced the birth to the wholly independent rocket industry, which has now changed to the development and creative industry,” KCNA said.

The DPRK’s Saturday could have been the “final test” of the carrier rocket for the geostationary satellite that was observed by Kim Jong Un in September last year, Kim Dong-yup, a researcher at the Institute for Far Eastern Studies told NK News.

The DPRK has launched multiple projectiles in or near the vicinity of the Sohae Satellite Launch Station, where its Saturday and last September tests were held.

Earlier this month, North Korea conducted an Extended Range (ER) Scud missile test, which is believed to have taken place near the launch station as well.

The most recent launch of a long-range rocket launch from this site was conducted about a year ago, when the DPRK launched the Kwangmyongsong-4.