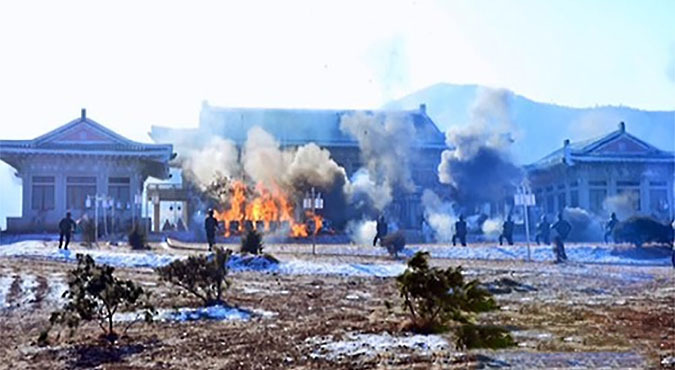 The drills, conducted by by Korean People’s Army Unit 525, were described as practice for “bold combat actions with the southern part of Korea as their theatre,” and were aimed at “destroying specified targets of the enemy” an accompanying KCNA report of the event said.

Photos released with the news stories showed heavily camouflaged North Korean paratroopers descending adjacent to the replica of Seoul’s Blue House, before storming it amid blazing fire and smoke. The date of the drill was not revealed, as is customary with events attended by Kim Jong Un.

But while North Korean media regularly publicizes drills on their front pages, the timing of the attack against the replica Blue House was notable, coming just two days after lawmakers in the South voted overwhelmingly to impeach President Park Geun-hye.

It’s also the first time North Korea’s military has been reported to have conducted any attack on the replica Blue House, which is located near the Taewon-ri firing range, in the southeastern corner of Pyongyang.

The replica Blue House was built sometime in in early 2016 | Imagery: Google Earth

The timing and style of the drills would be intended to get a reaction from the South, one North Korea watcher said.

“Given that the article does not indicate what the mock structures are in the report, it does seem to suggest that the North Koerans are trying to ramp up the tension, possibly to probe, at a very low cost,” said Jaesung Ryu, a PhD candidate at Rutgers university in New Jersey.

“The point is that the drill, as depicted in the article, should be seen as a probing act, which could arguably be different from an actual threat, to test South Korean mettle,” he added.

The storming of the replica Blue House comes as South Korea’s Prime Minister, Hwang Kyo-ahn – who is acting President following the impeachment – said on Friday that there is currently an increased risk of North Korean provocation.

However, many observers have said North Korea is unlikely to directly provoke the South amid the current political crisis. That’s because a direct military provocation could increase public support for the ruling Saenuri party at a time when progressive leaders – who would be more willing to support future aid towards the North – are currently rising in popularity.

Both the North and South Korean militaries have a track-record in releasing video or stills of drills involving direct attacks on the other Korea. Flags and effigies of senior leadership figures are often targeted in such drills, normally leading to news stories quickly spreading about the developments.

The drills, conducted by by Korean People's Army Unit 525, were described as practice for "bold combat actions with the southern part of Korea as their theatre," and were aimed at "destroying specified targets of the enemy" an accompanying KCNA report of the event said.