A North Korean crisis could be a defining moment for Trump
History shows that under the new administration, the DPRK will never be far from headlines
Dennis P. Halpin November 23, 2016 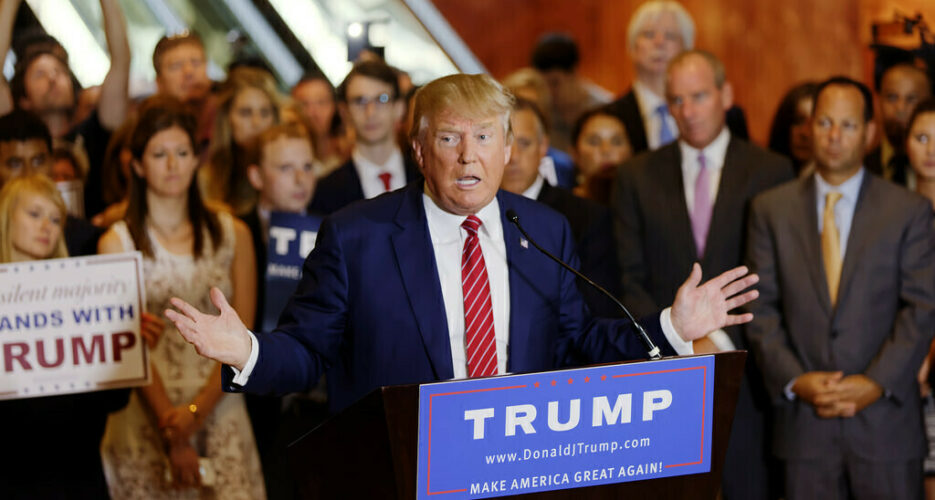 When a very green Clinton Administration took office in 1993, the major foreign policy focus was on the lingering fallout from the fall of the Berlin Wall and subsequent dissolution of the Soviet Empire, the aftermath of the First Gulf War, and re-engagement with China following the Tiananmen Square massacre.

Little thought was given to a hermetically-sealed, backwater of a country situated in a remote corner of Northeast Asia.  But within the first eighteen months of Bill Clinton’s presidency, North Korea emerged from the shadows to generate a full-blown foreign policy crisis, a crisis which would bring the United States to the brink of war.

It is likely that thoughts of North Korea are far from the minds of President-elect Trump and his advisers as they prepare to take the reins of government in little more than sixty days. But North Korea remains a ticking time bomb with the steady development of both the nuclear weaponry and long-range missile and submarine delivery capability that promises the ability to strike the American homeland by 2020, the last year of President Trump’s first term.

The New York Times reported on September 9th that “military experts say that by 2020, Pyongyang will most likely have the skills to make a reliable intercontinental ballistic missile topped by a nuclear warhead. They also expect that by then North Korea may have accumulated enough nuclear material to build up to 100 warheads.”

The article also quoted John Schilling, an expert on North Korea’s nuclear program as stating that “this isn’t something that can be ignored anymore. It’s going to be a high priority for the next president.”

North Korea’s August 24th launch of a submarine-based ballistic missile further demonstrates that Pyongyang may not need a long-range missile to reach the American mainland. Keeping track of North Korea’s submarine fleet, if it approached the West Coast, may not be as easy as Pentagon experts assert, despite advanced American tracking technology.

After all, a North Korean submarine seemed to come out of the blue in the Yellow Sea in 2010 to launch a sneak torpedo attack on the South Korean naval vessel, the Cheonan, which left 46 South Korean seamen dead.

History is not reassuring. On February 9, 1993 North Korea forced its way in a matter of days after the inauguration into the fledgling Clinton Administration Oval Office. It refused the International Atomic Energy Agency (IAEA) demand for special inspections of two North Korean nuclear sites where cheating was suspected. This was followed closely in March by Pyongyang’s announced intention to withdraw from the nuclear Nonproliferation Treaty (NPT) in three months.

After what were considered successful U.S-North Korean bilateral negotiations aimed at diverting a crisis, North Korea again refused to allow an IAEA inspection of its Yongbyon reactor and plutonium reprocessing plant in March 1994. The IAEA subsequently confirmed that Pyongyang had begun removing spent fuel from the Yongbyon reactor for likely reprocessing into nuclear weapons.

In June 1994 North Korea withdrew from the IAEA and the Clinton war room, according to the memoirs of then-Secretary of Defense William Perry, considered a surgical air strike on the Yongbyon reactor, which almost certainly would have triggered a second Korean War.

In an October 2002 article in the Washington Post, titled Back to the Brink, former and current Secretaries of Defense William Perry and Ashton Carter wrote: “The two of us, then at the Pentagon, readied plans for striking at North Korea’s nuclear facilities and for mobilizing hundreds of thousands of American troops for the war that probably would have followed.”

Time for talk is running out

A fortuitous trip to Pyongyang in June 1994 by ex-President Jimmy Carter to visit the seriously ill Great Leader Kim Il Sung (Kim died a few weeks later) defused the crisis. Kim was persuaded by Carter to “freeze” the North Korean nuclear program. The Carter deal was not without controversy, however, as the ex-President reached it without first consulting the Clinton Administration.

This was followed by the Clinton Administration’s Agreed Framework agreement with North Korea to freeze the re-processing of plutonium from spent fuel rods at Yongbyon and to eventually close down the nuclear power plant. North Korea, in exchange, would be provided with heavy fuel oil (HFO) and the construction of two light water reactors (LWR) to meet its energy needs.

The Agreed Framework remained in place until well into the George W. Bush Administration. Then, however, the discovery of North Korean cheating, by using a second, surreptitious path to the acquisition of nuclear weapons via highly enriched uranium (HEU), led to the scuttling of the Agreed Framework.

The George W. Bush-era pursuit of denuclearization with North Korea via the Six-Party Talks venue, hosted by Beijing, was equally disappointing. It broke down completely in late 2008 due to North Korea’s refusal to implement a transparent verification regime to confirm concrete steps were being taken toward denuclearization.

The Obama policy of “strategic patience” followed. With the one brief exception of the failed Leap Day deal, this has led to eight years of non-engagement with North Korea. Viewing in hindsight the failures of both the Agreed Framework and the Six-Party talks, the premise of “strategic patience” seems to be based on the old adage “fool me once, shame on you; fool me twice (or more) shame on me.”

Moving forward, President-elect Trump’s campaign assertion that he could successfully sit down and negotiate with Kim Jong Un seems to be based more on wishful thinking than the stark realities of past American negotiating experiences with the crafty and conniving North Korean regime.

And time for talk is running out. Experts now estimate that by 2020 Pyongyang will have refined weapons miniaturization to the degree that it could mount a nuclear warhead on a long-range missile. No ocean will be wide enough nor wall high enough to prevent the nuclear devastation that Kim Jong Un has promised to wreak upon America and its people.

In March, North Korea’s official mouthpiece, DPRK Today, even threatened the President-elect’s hometown: “Our hydrogen bomb is much bigger than the one developed by the Soviet Union… If this H-bomb were to be mounted on an intercontinental ballistic missile and fall on Manhattan in New York City, all the people there would be killed immediately and the city would burn down in ashes.”

President Obama will be handing over a worsening situation on the Korean peninsula to President Trump. North Korea has proven to be an unrelenting embarrassment to President Obama’s declared doctrine of a nuclear-free world as enunciated in his 2009 Prague speech. Four of Pyongyang’s five nuclear tests have been conducted on Obama’s watch.

The Obama Administration’s policy of “strategic patience” seems premised on simply ignoring the North Korean enigma with benign neglect. It has in no way curtailed Pyongyang’s long but steady march toward becoming a self-proclaimed “nuclear weapons state,” as officially stated by Kim Jong Un at the seventh Workers’ Party Congress in May.

Four more years of neglect of the North Korean nuclear threat would only serve to deepen the sense of  crisis. The new President will have to pay the North Korean piper for the false sense of security  generated by this neglect in the past. Otherwise there will be few guarantees that Kim Jong Un’s nuclear arsenal won’t have the capacity to come within striking distance of Trump Tower in Manhattan.

When a very green Clinton Administration took office in 1993, the major foreign policy focus was on the lingering fallout from the fall of the Berlin Wall and subsequent dissolution of the Soviet Empire, the aftermath of the First Gulf War, and re-engagement with China following the Tiananmen Square massacre.

Little thought was given to a hermetically-sealed, backwater of a country situated in a remote corner of Northeast Asia.  But within the first eighteen months of Bill Clinton’s presidency, North Korea emerged from the shadows to generate a full-blown foreign policy crisis, a crisis which would bring the United States to the brink of war.