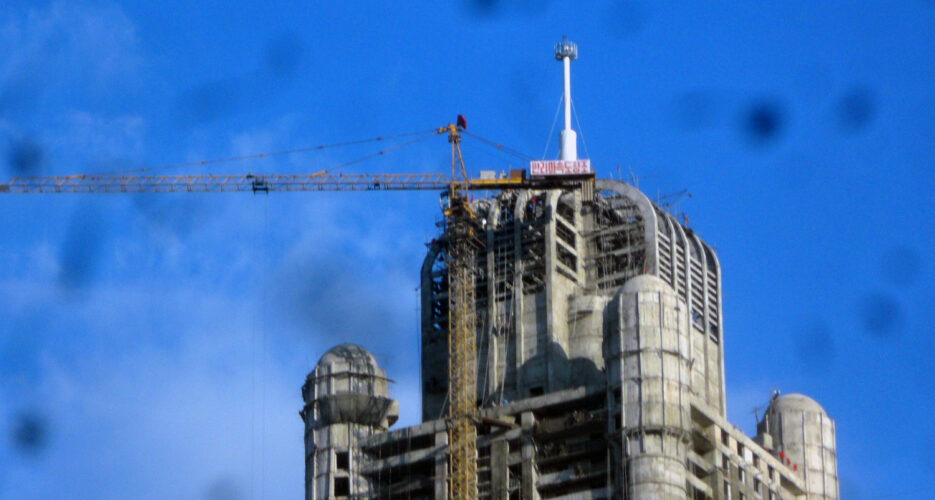 North Korea’s government has announced it is focusing all of its work capacity on flood recovery work in North Hamgyong Province and away from construction projects like the ambition Ryomyong Street redevelopment, state-run media reported on Sunday and Monday.

Described as “record breaking flooding,” and an “unexpected crisis” by the North Korean media, Pyongyang said it had stopped all of its progress on the Ryomyong Street project – a residential area which has received almost daily coverage from state-run media – to provide help for the victims.

“The party has decided to halt the process at the nearly completed Ryomyong Street to shift all of its workforces, materials, and equipment to the northern frontline,” state-run Rodong Sinmun read, quoting the Workers’ Party of Korea (WPK) Central Committee’s statement. “Building people’s houses is our top construction priority.”

According to the latest statement, “tens of thousands of homes, public buildings collapsed” while “railroads, roads, power supplies, factories, companies, and farms were destroyed or submerged” in North Hamgyong Province.

The statement did not specify when exactly the workers from Ryomyong sites were moved to the damaged zones in the North Hamgyong Province.

But photos obtained by NK News from a frequent visitor to Pyongyang who wished to remain anonymous show that the North may have dispatched much of its workforce in the immediate aftermath of the typhoon.

Multiple reports read that the typhoon lasted from August 29 to September 2, while the in-country source’s picture taken during the daytime of September 3 showed that there were zero workers present at the Ryomyong Street sites in Pyongyang.

This absence, should it be because of the flood recovery works, is in significant contrast to previous coverage, which showed hundreds working on the sites 24 hours a day.

The report also revealed that the county had shifted the ongoing national economy campaign‘s objectives to providing housing for the victims.

“To handle the state of emergency, our party has changed the 200-day battle’s primary goal to the restoration of the northern part of the country,” the statement read.

Initiated in late May, the North’s 200-day battle campaign focused on boosting its national economy “as the breakthrough towards the five-year economic growth strategy,” Kim Jong Un was quoted as saying. It was later claimed that the first and second month’s results of the campaign showed significant national growth.

Around the time the country was to release its third month’s report on earlier September, it was hit by the devastating Typhoon Lionrock.

The North Korean statement also expressed concern that the victims of this typhoon might have to suffer severely from the upcoming winter season unless the damages are repaired quickly.

“At all cost, and even by pouring the whole of the state’s wealth, we have to make sure that the people from the damaged areas do not suffer from the upcoming brutal coldness,” it read.

However, the statement released on Sunday did not provide any numeric figures to know whether the number of victims has increased since its initial report.

North Korea's government has announced it is focusing all of its work capacity on flood recovery work in North Hamgyong Province and away from construction projects like the ambition Ryomyong Street redevelopment, state-run media reported on Sunday and Monday.Described as "record breaking flooding," and an “unexpected crisis” by the North Korean media, Pyongyang said it had stopped all of