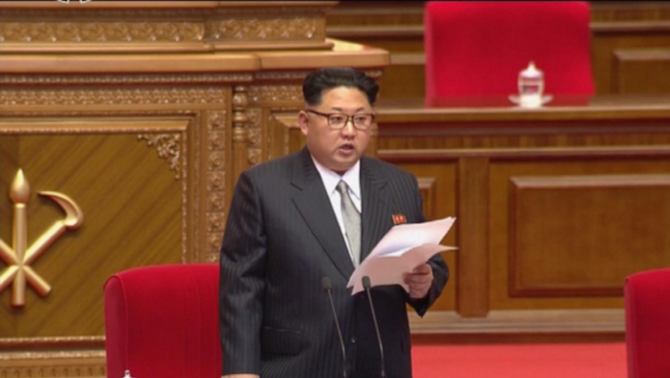 Kim, dressed in a suit and tie, was shown speaking to a packed congress at the April 25 House of Culture in a 10 p.m. news broadcast on KCTV following hours of uncertainty as to how events had progressed.

“I announce the opening of the Seventh Congress with firm belief that this historical congress will bring final victory,” Kim told the officials gathered.

“The Seventh Congress will be the historical turning point to set the new sign point for the fight for the development and enhancement of the Kim Il Sung-Kim Jong Il party and fight for the achievements of socialism.”

The footage showed the delegation clapping in approval of Kim’s speech throughout his delivery.

“World’s socialism have collapsed, and is facing the unprecedented age of hardship facing the coalition of imperialists … all kinds of blockades, sanctions and pressures have completely blocked the path of survival,” he said.

“With the stirring explosion sound of a hydrogen bomb, we made the miracle possible of defending the country’s dignity and its protection,” Kim said in his speech.

Special mention was also given to the 70-day campaign ordered throughout the country in preparation for the Congress, which pushed for an increase in productivity and construction.

Following highlights of Kim’s speech, a KCTV news narrator detailed five purposes for the ongoing congress event: Firstly, to unify the business of the Workers’ Party of Korea (WPK) Central Committee. Second, to unify the business of the WPK’s Central Inspection Committee. Third, to reform the party’s regulations. Fourth, to crown Kim Jong Un as the most senior leader of the entire party. And fifth, to elect the central party’s leading organizations.

The last two major political events in North Korea, the third and fourth conferences of 2010 and 2012, were used to designate Kim Jong Un as official successor of Kim Jong Il and to promote the young leader following his father’s death in December 2011.

North Korea’s Seventh Congress was announced on October 30, 2015, scheduled to take place sometime in early May.

Since then Pyongyang conducted a flurry of acts which have drawn stern condemnation from the international community for breaching UN Security Council Resolutions, including a fourth nuclear test, satellite launch and numerous ballistic missile tests.

It’s unclear how long the current congress event will last, though the last one in 1980 took five days.

Kim Jong Un hailed North Korea's nuclear program and recent satellite launch in a speech presented on the first day of the Seventh Congress of the Workers' Party of Korea, state media outlet Korea Central TV reported late on Friday evening.Kim, dressed in a suit and tie, was shown speaking to a packed congress at the April 25 House of Culture in a 10 p.m. news broadcast on KCTV following