New Yalu river bridge opening postponed
Lack of development on North Korean side had been apparent for nearly a year
Robert Lauler October 31, 2014 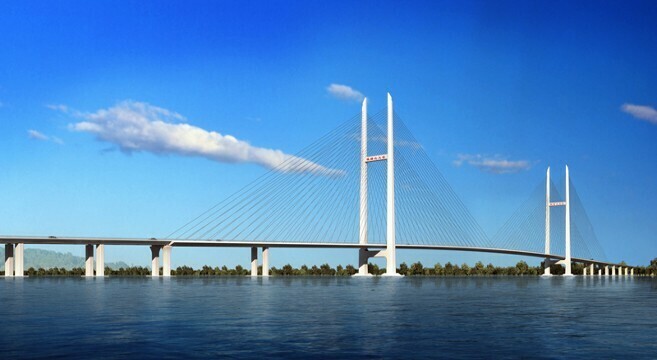 The opening of a lengthy Chinese-funded bridge across the Yalu River aimed at increasing trade with North Korea has been postponed indefinitely, the Times of London has reported.

The China News Service reported in late September that the £200 million Yalu River Bridge would open sometime in October, but satellite imagery from June 10 showed the development of connecting infrastructure in North Korea to have all but stalled since December 2013.

“The construction of the bridge will be delayed by one year for various reasons,” Zhang Hui, chairman of Liaoning Communications Construction Group, the main contractor, told the Times.

Recent Google Earth imagery shows the Chinese side of the bridge connecting to the recently built Dandong New City Zone, but the North Korean side only connects to a half-mile long highway that abruptly stops in farmland.

“North Korea and China stipulated that both sides should coordinate their work to finish at the same time, (but) the North Korean side is still a muddy field,” a man named Liu who invested in land in “Commerce and Logistics Zone” at the Chinese end of the bridge told a Times reporter.

Chinese netizens on online message boards have also reportedly started to joke about the “amazing New Yalu Bridge, which takes you direct to a North Korean cabbage field,” the Times reported.

Though the imagery shows that several buildings were raised on the North Korean side of the bridge in early 2012, construction on the connecting highway into DPRK territory appears to have halted around December 2013.

In late September, NK News analyst John Grisafi detected the construction of a new road approximately 4 kilometers from the new Yalu River Bridge, suggesting that North Korea may have been able to connect the new bridge in time for its planned October opening.

But, ultimately, the lack of a connecting highway in recent satellite imagery corresponds with reports from the Seoul-based Daily NK, which in July said the planned opening of the bridge would be delayed due to “North Korea’s failure to make good on its contractual obligations.”

The DPRK and China agreed to build the bridge in late 2010 reportedly to ease traffic on the old China-DPRK Friendship bridge and “transform the trade relationship” between the two countries.

The China News Service said that upon completion, the new Yalu River Bridge would “be open to road traffic, increasing the importance of Sino-North Korean trade to the Dandong economy.”

The new bridge has been built into Dandong, China’s largest trade port with North Korea, which handles a reported 80 percent of bilateral trade.

The state-owned news agency added that related tourism projects were currently under negotiation with North Korea, “including an island tour, a two-day tour, and self-drive holidays…(and) more tourism options to follow.”

The KCTV segment said that more than 3,000 lorries and cargo ships would pass over and under the bridge per day, while estimating its completion to come in September 2014.

But it remains to be seen how such increases in trade and tourism will be possible once the bridge opens because of the lack of infrastructure on the North Korean side of the bridge.

The opening of a lengthy Chinese-funded bridge across the Yalu River aimed at increasing trade with North Korea has been postponed indefinitely, the Times of London has reported.The China News Service reported in late September that the £200 million Yalu River Bridge would open sometime in October, but satellite imagery from June 10 showed the development of connecting infrastructure in

Robert Lauler has worked as an NGO employee, translator and writer during his time in Korea. He is now an NK News correspondent based in Seoul and can be reached at[email protected].