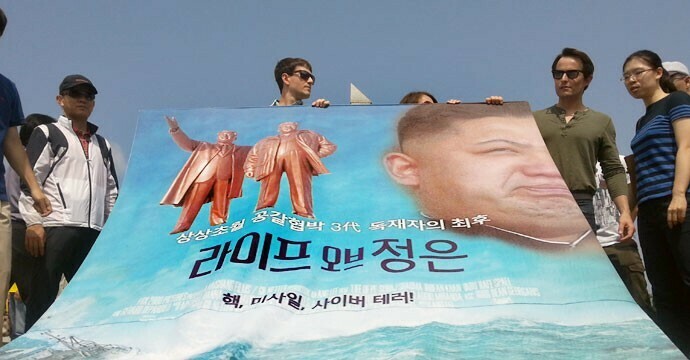 The numbered editorial – which indicates the start of a series about high-profile North Korean defectors – launched a personal attack on Park, who chairs the Fighters for Free North Korea (FFNK), an activist group well-known for launching pro-democracy messages via helium balloon to the North.

“Anyone with a conscience would seek to repay their exalted country, but on the contrary, the jerk Park Sang Hak took the dirty path of betrayal,” the editorial said.

Park had always been “lazy and debauched,” the editorial continued, adding that “in South Korea, he fell into his old habits of chasing feral pleasures.”

The article further accused Park of being a political pawn to South Korea. “The South Korean puppet government, by patting this kind of person on the back and tossing him a few coins to use him in their schemes, is also extremely pathetic.”

But the editorial – which also suggested Park had been punished for smuggling North Korean cultural artifacts – was based on lies, Park said when contacted by NK News on Thursday.

“Another inaccuracy is that I wasn’t born in Japan like the article states,” Park said. “My parents were born in Japan and later went over to North Korea, where I was born.”

Park, who says he is called “Enemy Zero” by the DPRK government, told NK News that the article is still “beautiful and charitable in comparison” to many of the messages he received previously.

“I still get death threats faxed to me every now and again, telling me they’re going to kill my entire family,” he said. “The KCNA has said at one point that they are going to follow me to the ends of the earth to kill me.”

Park was notably the target of a failed assassination attempt in 2011, when a North Korean agent tried to stab him with a poisoned needle.

But Park said that he does not feel endangered by this particular statement. “The only objection I have is that I did not become the South Korean government’s political pawn like the article says.”

“Not only have I not received any money from the government, I’ve been sending balloons over even in the face of the South Korean government’s severe opposition. In fact, I just got back from an argument with the police about this.”

Park’s organization has been supported on previous balloon launches by the New York-based Human Rights Foundation, a not-for-profit mainly focused on promoting freedom of political thought.

“I think it’s partly an intimidation tactic, sending the message to their targets that (North Korea is) keeping tabs on them,” said Nam. “This kind of blatant blackmail is something that works in North Korea, but I don’t see it doing much to people out here (in South Korea).”

Besides the numbered title, the preface of the article indicates that Thursday’s attack on Park Sang Hak is the first of a several others soon to come.

Accusing defectors of “hating work and being crazy about monetary wealth”, the article said that, “We are going to scrutinize the identities of those who have ceased to be human.”

The numbered editorial – which indicates the start of a series about high-profile North Korean defectors – launched a personal attack on Park, who chairs the Fighters for Free North Korea (FFNK), an activist group well-known for launching pro-democracy messages via helium balloon to the North.