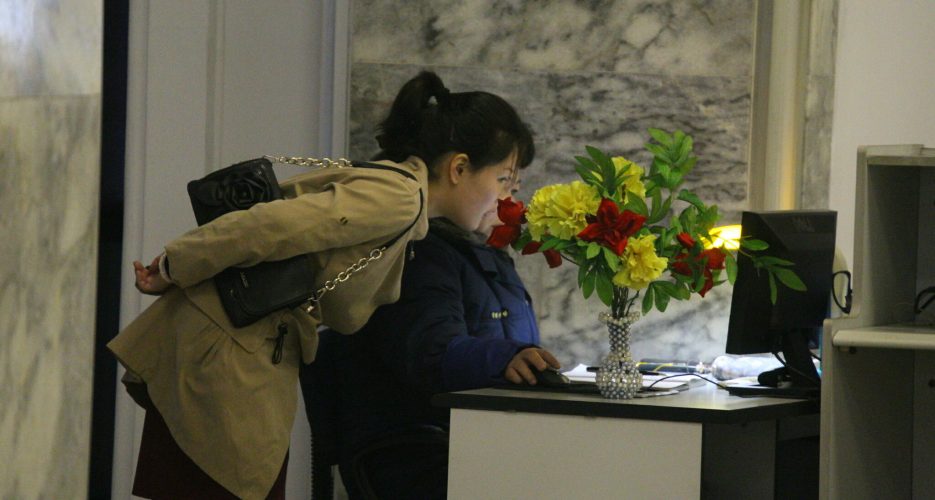 Access to an NK News data tool that allows researchers to visualize North Korean media reporting has been blocked by South Korean authorities for breaching a 1948 law designed to “to restrict anti-state acts that endanger national security”.

Since Friday, users from South Korea have been unable to access the NK News KCNA Watch system, redirected instead to an embedded Korea Communications Standards Commission (KSCS) warning screen that is commonly shown when users try and access North Korean owned websites or pornography from South Korea.

“I am dismayed to learn that access to NKNews.org’s KCNA Watch pages has been blocked in South Korea – this is an invaluable research tool for scholars. To ban it is thus utterly wrong and misguided on all counts,” Honorary Senior Research Fellow at Leeds University, Aidan Foster-Carter said on Monday.

Although the act of reading Korea Central News Agency reports is not technically illegal in South Korea, the KSCS routinely blocks websites that facilitate access to North Korean media in an effort to prevent South Korean nationals posting materials judged to be in support of Pyongyang – an act that can result in prosecutions under the National Security Act.

The Act, which has have received increased international attention in recent years, has received criticism from independent watchdog organization Freedom House, who said in October that corresponding censorship activities mean South Korea’s internet is only “partly free”

“As a mature democracy, South Korea should not be controlling what its citizens read in any way. Leave such censorship to dictatorships like North Korea,” Aidan Foster-Carter said.

“With a new government committed to Trustpolitik with the North, it is especially anomalous and wrong to continue to block South Koreans from becoming better informed about North Korea. That includes accessing the DPRK’s own websites,” he added.

But not everyone agrees.

“We should not forget that North and South Korea are still in armistice status. North Korea’s propaganda activities towards South Korea and the world are still working, but South Korea has not got many means to cope with it,” Open Radio for North Korea’s International Affairs Manager Eunkyoung Kwon told NK News.

“Isn’t it natural that KCNA Watch is banned? In South Korea both KCNA and Rodong Sinmun are banned. If your page is linking to KCNA then it must also logically be banned. For me, there is nothing absurd about this,” Kwon added.

Fortunately, access to the majority of the NK News site has not been prevented by the South Korean government, a point highlighted by Daily NK editor Christopher Green.

“This ban shows a surprising level of specificity by the South Korean authorities. Censorship of this kind is a pretty blunt instrument, and the main body of NK News is rather lucky to have escaped harm.”

In a bizarre development, North Korea simultaneously blocked the entire country of New Zealand from accessing the website of its national newspaper Rodong Sinmun on Friday.

The one-day ban of incoming traffic, which affected every personal computer in New Zealand, was in response to NK News developer Frank Feinstein’s efforts to database content into the KCNA Watch tool.

Feinstein, who scrapes North Korean media websites to categorize and tag content for the KCNA Watch database, triggered a number of security settings on the Rodong’s website, which led to the blanket ban of all incoming traffic from New Zealand

“They have no qualms about block banning entire groups such as the entire Harvard university pool, or a small country. So while they would think twice before banning all visitors from the U.S., they wouldn’t blink over Iceland,” Feinstein explained.

“While I’m not happy at being banned in either country, North Korea’s banning system is more reflexive, as they alter their security settings due to continual distributed denial of service attacks, and are often on ultra-paranoid settings. In contrast, South Korea’s ban is just an outright good old fashioned censorship ban”, Feinstein explained.

North Korea bans its own citizens from accessing the internet and in 2011 was described as the “most repressive media environment in the world” by Freedom House.

“We inform you that the connection to this website you tried to access is blocked as it provides illegal/hazardous information. This information(website) is appropriately restricted by the law on the establishment and operation following the deliberation of the Broadcast and Communication Committee on this matter. If you have any inquiries regarding this issue, please contact those institutions in charge underneath.”

Access to an NK News data tool that allows researchers to visualize North Korean media reporting has been blocked by South Korean authorities for breaching a 1948 law designed to "to restrict anti-state acts that endanger national security".

Since Friday, users from South Korea have been unable to access the NK News KCNA Watch system, redirected instead to an embedded Korea Communications Standards Commission (KSCS) warning screen that is commonly shown when users try and access North Korean owned websites or pornography from South Korea.