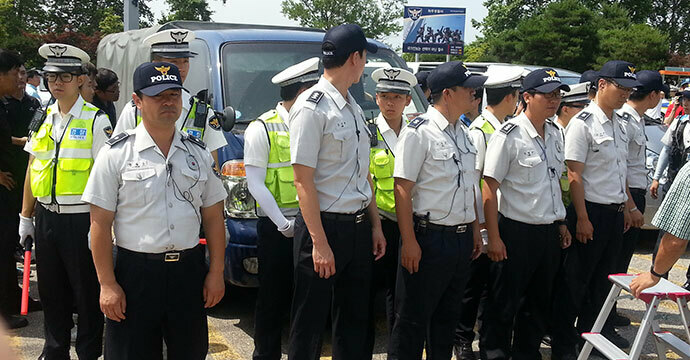 Park Sang-hak, chairman of Freedom Fighters of North Korea (FFNK) was taken to Paju police station late on Saturday morning, along with a small blue truck containing the balloons and its driver, a fellow defector.

“They’re Commies! Commies! This shouldn’t be happening. Many people died protecting this country during the Cheonan and Yeonpyeong-do incidents, but these good for nothing [police] are doing this bullshit because North Korea told them not to spread the leaflets. It’s totally unthinkable!”, a North Korean defector, hiding her face from a crowd of media cameras, told NK News at the scene.

One side of the leaflets, which resemble small pockets made from plastic bag-type material, describe Kim Jong Il as a “traitor” and “merciless murderer” who made the North Korean people’s life a “living hell.”

“Park Geun-hye, President of South Korea, will continue the legacy of her father Park Chung Hee to free the twenty-million North Korean people struggling under the tyranny of a harsh hereditary dictatorship and work towards liberal unification.” the other side continues.

Park Chung Hee ruled South Korea as a military dictator from 1963-1979 but is widely credited with South Korea’s economic success. His daughter, Park Geun-hye, was elected South Korean president in 2012.

Park and members of the U.S.-based Human Rights Foundation (HRF) arrived shortly after 10am in a convoy of cars headed by a small blue truck carrying thousands of balloons, leaflets, USB sticks, chocolates, pocket shortwave radios and Chinese and U.S. currency.

Around 200 plain-clothed and uniformed local police, however, had been waiting at the Peace Pavilion –– where balloon launches normally take place –– since 8am and immediately encircled the truck containing the balloons.

“It’s absurd, and a sad and poor reflection on the South Korean government that they’re so afraid of some leaflets,” Thor Halvorssen, president of the Human Rights Foundation, told NK News at the scene.

“They’re only stopping it because they don’t want Koreans to know it happened. They’re giving the North Korean government veto power over the actions of private citizens in a free society,” Halvorssen, who was in South Korea to award Park with a $20,000 prize for “creative dissent” told NK News.

After accepting the award, Park announced that his team would instead launch the balloons from a small parking area at the pavilion’s main entrance since his original plan to launch the balloons within the Peace Pavilion had been obstructed by the police.

North Korea would open fire on Park and the HRF delegation if the balloon launch went ahead, a statement published on Thursday by North Korean propaganda outlet Uriminzokkiri said. A similar statement from the Korean People’s Army (KPA), carried by the KCNA, was released at 0529KST on the morning of the launch.

“Is President Park afraid of this 29 year-old tyke Jong Un? Why is she ordering the police to stop the launch of these peaceful leaflets which tell the North Koreans the truth? Why is she preventing freedom? How is this different from the Roh period?”

During the 2003–2008 Roh Moo-hyun administration, that saw a “softer” period of engagement towards North Korea, the South Korean government prevented FFNK from launching balloons.

When Park announced the launch would take place elsewhere, uniformed police officers surrounding the truck containing the balloons were immediately replaced by a group of plain-clothed policemen –– a move that, in South Korea, often indicates the police may be intending to use force against the protesters.

The uniformed officers returned, however, when Park and his associates announced they would be leaving.

Park and an associated then attempted to drive the truck out of the police cordon, but were stopped by plain-clothed officers and arrested after a brief physical struggle. By 11am Park was in Paju Police Station, charged with obstruction of justice, and was released later in the day.

There was confusion, however, as to the postponing of the launch. “I don’t understand why they’re not letting us go,” one FFNK member told NK News.

Park Sang-hak, chairman of Freedom Fighters of North Korea (FFNK) was taken to Paju police station late on Saturday morning, along with a small blue truck containing the balloons and its driver, a fellow defector.

Hyowon Shin (@hyowonshin) is an NK News staff reporter in Seoul and a Master's student at Yonsei Graduated School of International Studies.

Susan is a reporter for NK News Seoul, and is currently reading for a Master's at the Yonsei Graduate School of International Studies. Susan graduated from the University of Notre Dame and studied overseas at Peking University. Her grandparents are from North Korea.