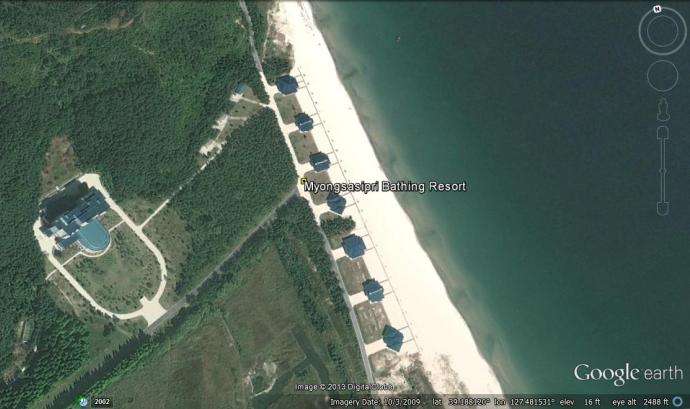 It also appears that the complex formerly known as the Kalma Rest House (갈마휴양소) for KPA Air Force pilots has been renamed the Saenal Hotel (세날호텔).

Though helpful, the news broadcast did not mention the new facility under construction on the northern end of the peninsula.

In the absence of any hard data, I suspect that this will be a new rest house for KPA service persons that is meant to replace the aging Kalma Rest House (Now Saenal Hotel).  The other hotels on the peninsula have been turned over to local and foreign tour concerns to generate revenue.

The southern end of peninsula is dominated by the KPA Air Force:

The middle of the peninsula is a KPA artillery demonstration area:

On the northern end of the peninsula lies the Kalma Rest House (갈마휴양) and Kalma Theatre (갈마극장).

This  is a resort area for KPA Air Force pilots, and in recent years it has seen new construction.

In the below images we can see that two large new buildings have been added between October 2009 and March 2013.

The building in the lower-left yellow box appears to be a new gymnasium or sports arena based on satellite imagery taken in May 2011: 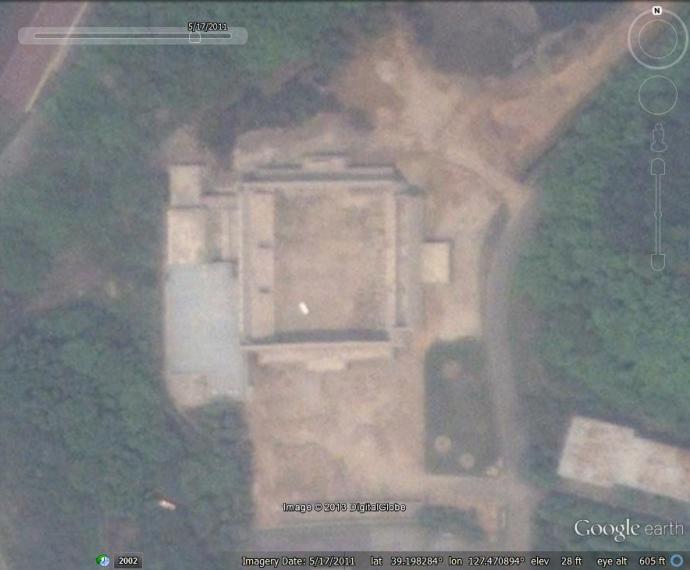 The building on the yellow box on the upper right is the new Saenal Hotel (새날호텔), likely named after the Saenal Revolutionary Site in Sinchon County, South Hwanghae Province.

One tourist source who has visited the hotel told NK News that the hotel may have been built for local North Korean customers to use because each room contains portraits of Kim Il Sung and son Kim Jong Il.

Hotels designed for foreign tourists do not typically include rooms with these portraits.

Construction of the exterior of the Saenal Hotel took place between October 2009 and May 2011. The building began to take on a completed look in September 2012, and though there is still a question as to whether foreigners will be welcome here, Koryo Tours reports it is intended to open in mid-July 2013. 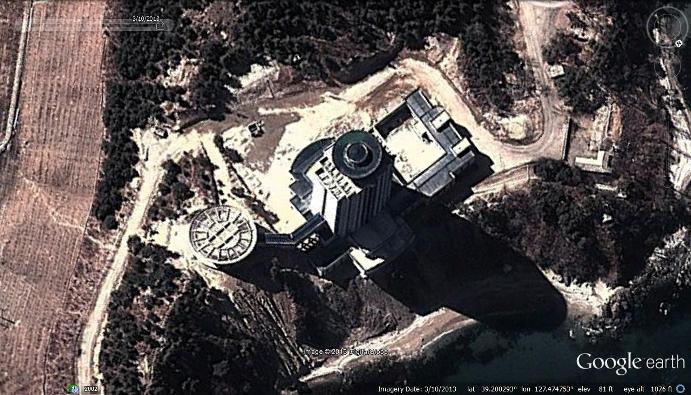 Between the Kalma Rest House for air force pilots and the artillery testing grounds is the Kalma Hotel (No. 1 and No.2 buildings) and Kalma Bathing Resort. 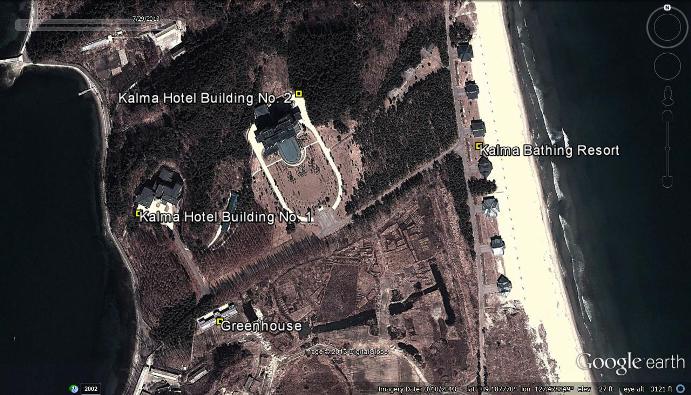 Each of these facilities were updated between November 2002 and July 2009: 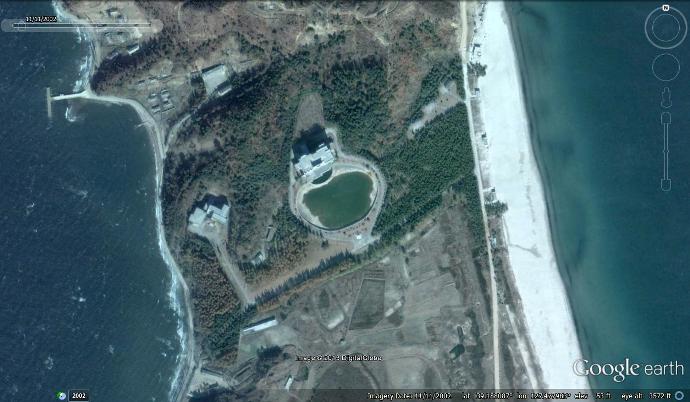 Tour companies Koryo Tours and Juche Travel were recently given access to these buildings. Despite the odd location nestled among the KPA, they will soon be open to foreign tourists. You can see photos of the hotels here and here.

According to Koryo Tours:

The Kalma Hotel (Block Number 1) boasts 2 first class rooms and 34 second class rooms as well as a sauna, 3 restaurants, a banquet hall, meeting room, karaoke and a small bar on the first floor. I was told there are also plans for a billiard room, chess hall, ping pong hall and a second bar.

The Kalma Hotel (Block Number 2) has 58 rooms of 4 different standards – Deluxe, First, Second and Third Class. All except 3rd class are equipped with the complete works of Kim Il Sung in pretty much every language you could hope for and amazing china ornaments. The deluxe rooms look very similar to the first class rooms in Block 1 but these have their own mini-sauna attached to the shower and you can’t get much more exclusive than that. If you can’t quite stretch to deluxe, the first class rooms in block 2 nix the sauna and offer a jacuzzi instead. Apart from the opulent rooms in the upper classes this hotel also features a huge banquet hall with a stage and a piano, as well as a billiard hall, ping pong room and 2 dining rooms.

Tourists have access to this beautiful beach at anytime but have to pay a fee. The bathing resort has 7 large shower blocks with saunas and lockers and there are facilities available for tourists to hire inflatable boats and body boards – there’s also a volleyball court.

The investment in tourist facilities here is consistent with previous reports that the DPRK leadership has targeted this area for development as a special tourist zone. Just west of the hotel the Masik Pass Ski Resort is under construction and plans to transform the Kalma Air Force Base into a civilian airport have surfaced (see here and here).

It is also possible that the KPA has retained management control of these facilities and has opened them up to tourism as a means of attracting hard currency when they are not in use by service personnel.

UPDATE (August 11, 2013): On August 4 North Korean state television broadcast footage shot at the new facilities on the Kalma Peninsula. You can see the footage on Youtube here.  This television broadcast was helpful at filling in some of the information gaps in the initial report posted on July 31.To begin with, it appears that the newly refurbished beach resort next to the Kalma Hotel is 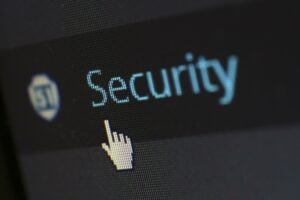 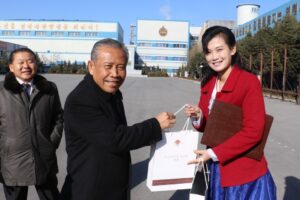