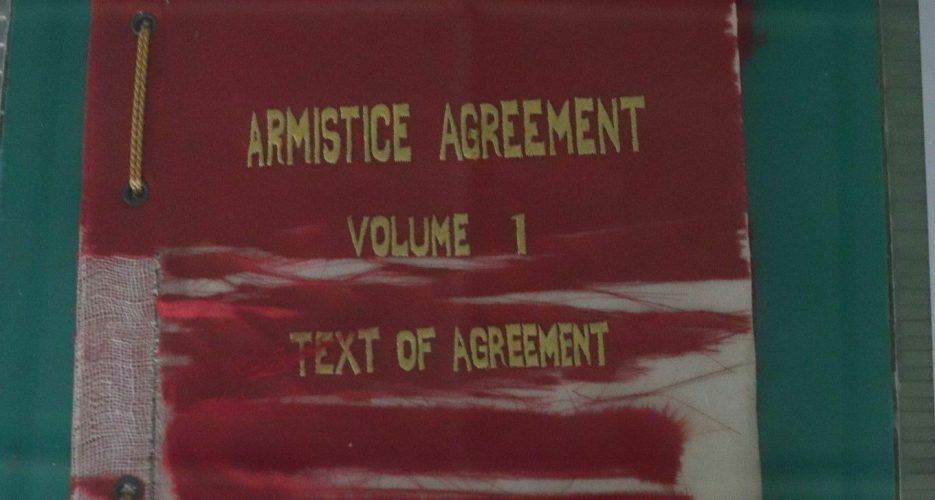 SEOUL – All nonaggression agreements between North and South Korea are to be scrapped with immediate effect and a military hotline between the two countries is to be cut, North Korea announced this morning.

A spokesman from the South Korean defense ministry warned that the North Korean regime would “perish from the Earth” if there was a nuclear attack.

“If the enemy makes any slight reckless provocation against the DPRK (North Korea) in sensitive waters again, he will issue an order to start a just and great advance for national reunification on all front lines, never missing a golden opportunity,” North Korean state media reported Kim Jong Un as saying to high-ranking defence figures at an outpost near South Hwanghae, in the Southwest territories of North Korea. Kim had not been seen publicly since attending a basketball game with Dennis Rodman last week.

The KCNA also reported “reinforced firepower” and “strike means” on the five islets in disputed waters West of the inter-Korean border.

The Seoul-based Dong-A Ilbo points out, this is not the first time North Korea has cut off the inter-Korean hotline; calls were previously cut from Panmunjom in November 2008 before being restored in August 2009. However, given the recent serious rise in tensions, observers worry that a lack of communication between the two sides could cause a single provocation to escalate rapidly.

South Korea announced that it would hold a meeting of senior security officials at 1700KST Friday, including senior presidential security secretary Ju Chul-ki, and the deputy chiefs of the defense ministry, foreign ministry, unification ministry and National Intelligence Service (NIS).

Earlier in the day, the UNSC unanimously passed additional sanctions on North Korea, including measures aimed at North Korean trading, finance and travel.

The resolution urged member states to take appropriate measures to cut off financial flows from their country to North Korea that could go towards the ballistic missile or nuclear programs, and for the first time established a common definition of luxury goods that cannot be sold to North Korea.

North Korea has made numerous threats in recent days related to ongoing, or soon to start, military exercises between the U.S. and South Korea. The North Korean Foreign Ministry said in a statement that it would “exercise the right to a preemptive nuclear attack” and nullify the Korean Armistice Agreement from March 11, unless scheduled U.S. and South Korean military drills are cancelled.

The exercises are a source of constant anger for the North Koreans, claiming joint military drills act as dress rehearsals for a planned invasion of North Korea.

North and South Korea never formally ended the Korean War, with hostilities frozen for sixty years based not on a peace treaty, but a temporary armistice agreement.

SEOUL – All nonaggression agreements between North and South Korea are to be scrapped with immediate effect and a military hotline between the two countries is to be cut, North Korea announced this morning."Our security situation is currently very dangerous," Park Geun-hye told reporters in Seoul, promising that her administration would deal "strongly with North Korea's provocations."The