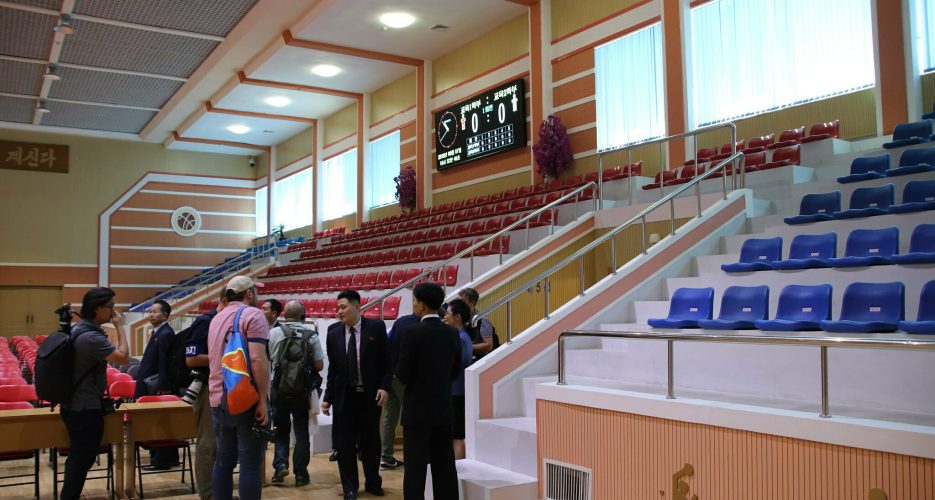 Rodman said after the game, “Although relations between the two countries are regrettable, personally I am a friend of Marshal Kim Jong Un and the DPRK people.”

According to Xinhua, during the match, Rodman, who wore dark glasses and a hat, sat to the left of Kim Jong Un. Without any translators, the two talked directly to each other and laughed, witnesses said.

DPRK cheerleaders wearing traditional clothes and miniskirts performed during the intermission of the game. After the game, a DPRK university presented a banner to the Harlem Globetrotters.

Foreign journalists were not invited to cover the U.S. delegation’s trip, a move which will be surprising given the opening of a Pyongyang Associated Press bureau in early 2011 and widespread Chinese and Russian media presence there.

Little other information of the high-profile meeting has been released so far by North Korean media, though it marks the first time the North Korean leader has met an American visitor since he took power in December 2011.

My general view is that sports and politics should be kept separate. I think it was right for Jesse Owens to go to the Berlin Olympics, and I didn’t support the U.S. boycott of the Moscow games. That said, I think they should have leveraged or should leverage their visit to get young North Korean players to hoop camps outside of the country– Canada, Australia, U.S., wherever.

Dennis Rodman, who once posed in a wedding dress to promote  his 1996 biography, arrived Tuesday with two members of the Harlem Globetrotters basketball team and a film crew from Vice Media, reportedly to shoot a documentary for HBO television.

Vice Media’s Shane Smith, who has visited North Korea before, told the Associated Press that the delegation had always planned to meet the North Korean leader, Kim Jong Un,

When I discussed with Dennis the invite to go to North Korea and meet with Kim Jong and the Korean national basketball team as part of a documentary for HBO, he knew it was a once-in-a-lifetime opportunity to have a fun shoot around playing basketball and would give him the chance to speak directly to Kim Jong that the only way to go is with peace not war.

Vice Media said the visiting delegation hoped to engage in “basketball diplomacy” in North Korea by running a sports camp for children and playing games with local people – and by competing alongside North Korea’s top athletes in an exhibition match they hoped would be attended by Kim Jong Un.

The last time an American envoy met a North Korean leader was in 2000, when U.S. Secretary of State Madeleine Albright met with Kim Jong Il.