NK News is routinely cited by mainstream media for coverage on North Korea. Recent citations include: 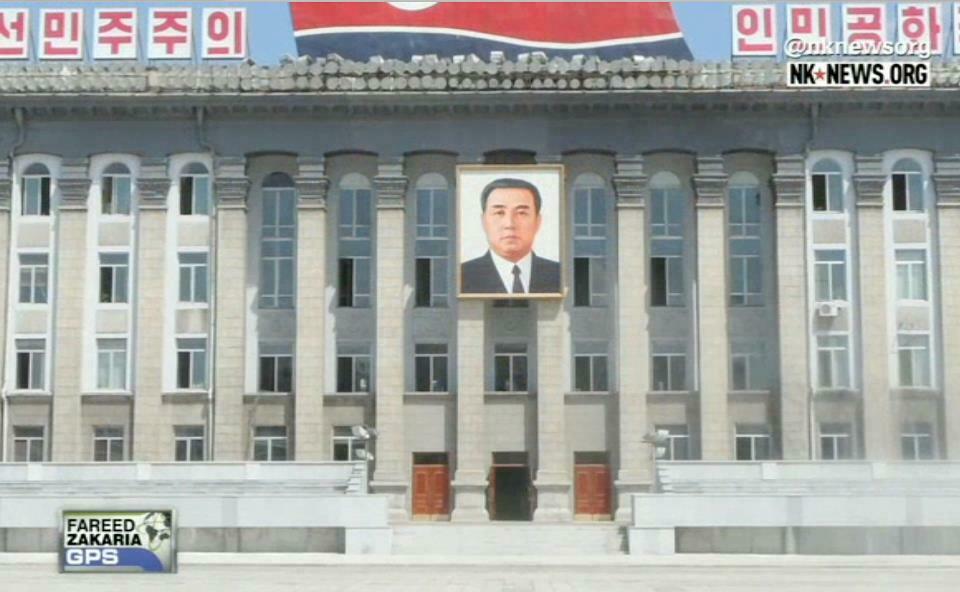 The BBC’s broadcast monitoring service wrote a feature about NK News in June 2013:

“Understanding the thought processes of ordinary North Koreans is a common theme on exile websites. The US-based NK News has a regular feature called “Ask a North Korean”, where a defector replies to questions like “What do North Koreans think of Americans?” (Answer: They hardly do, in a real sense, being much more familiar with Asian foreigners through television).

NK News is often quoted in mainstream US and UK media and recently gained attention for its data visualization feature, the North Korean Leadership Tracker, which plotted on a graph the official visits of the junior and senior Kim leaders since 1994. Many exile media sources pride themselves on providing news and analysis from experts with an intimate knowledge of the North, and on being an alternative to reportage from “journalists who are shipped in and shipped out”, as NK News describes it.

They may even critique each other. In its “NK L! ite” section, NK News carried an article called: “Why Mein Kampf has little to offer a North Korean Statesman” which sceptically examined why the story reported by New Focus was so quick to catch on.

The Wall Street Journal did an extensive feature on the NK NEWS Leadership Tracker: 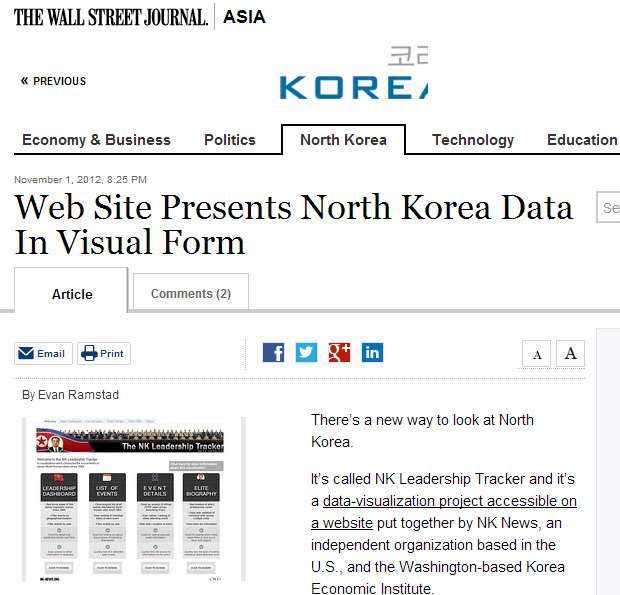 The Guardian did an extensive feature on the NK NEWS Leadership Tracker: 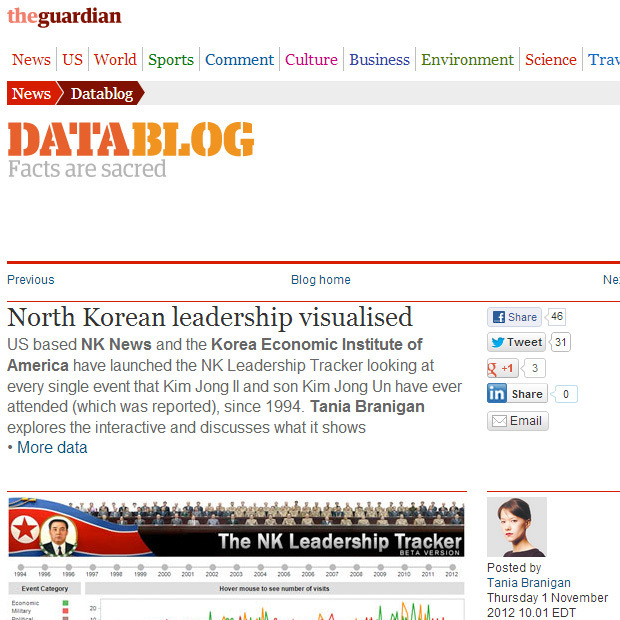 Following news broken by NK NEWS that revealed a DPRK missile attack strategy on the U.S.,  Gawker place our reporting in the top slot of their homepage. 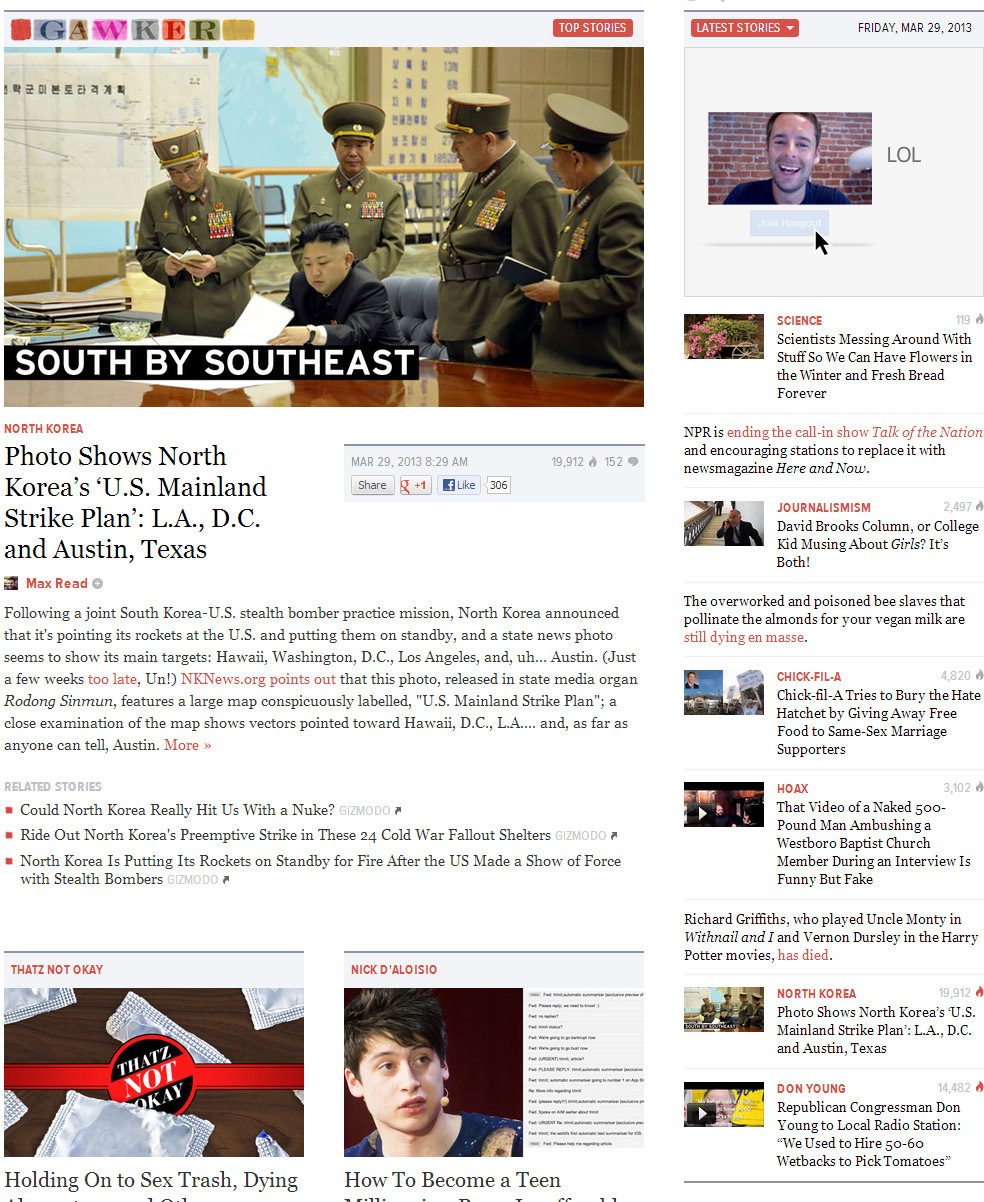 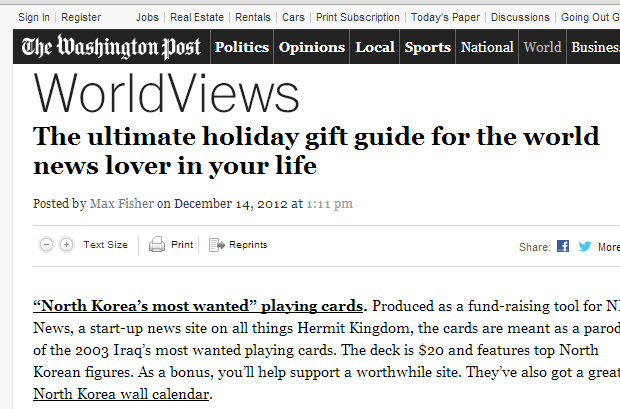 Following news broken by NK NEWS that revealed a DPRK missile attack strategy on the U.S.,  Digg.com place our reporting in the top slot of their homepage. 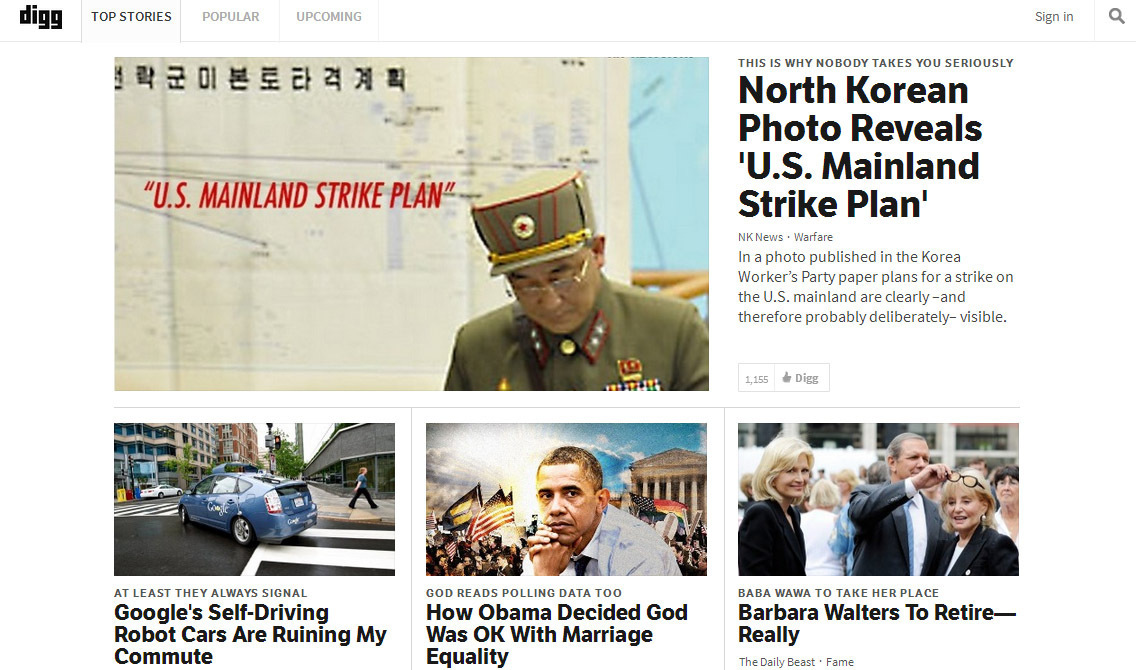 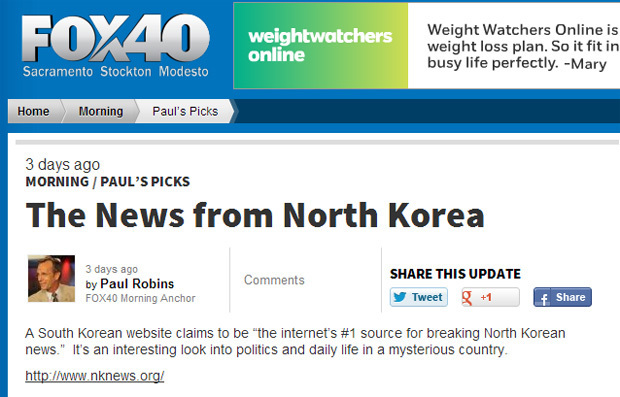 The HuffPo carried a livestream of the NK NEWS “Ask a North Korean [LIVE]” feature, with a major write-up of the outcome: 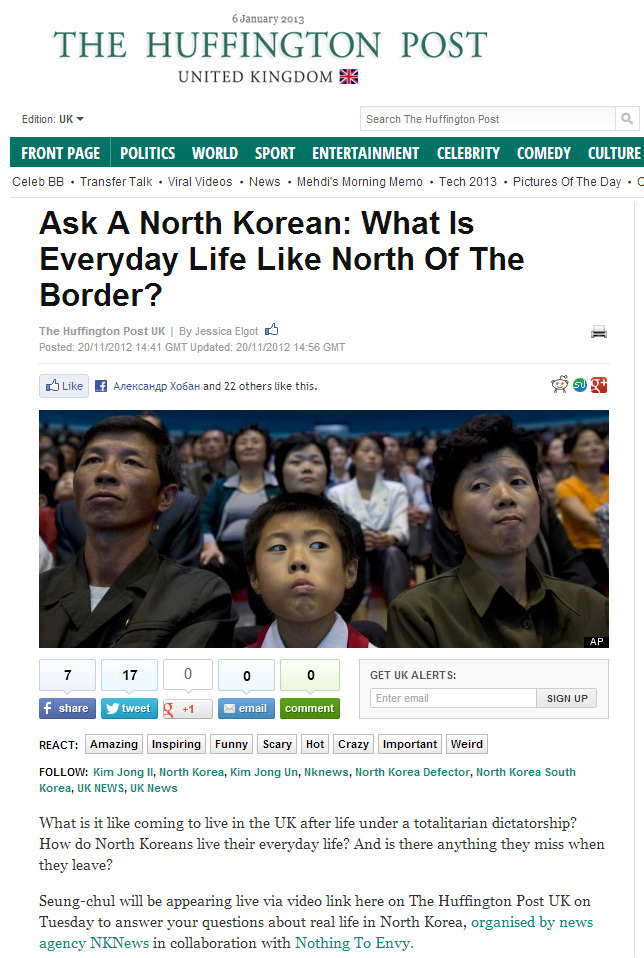 NK News revealed that North Korea may have skirted UN sanctions on luxury goods, which was repeated as headline news in South Korea’s Chosun Ilbo.

After an exclusive story by NK NEWS on the suspension of Kempinski’s involvement in the Ryugyong Hotel, Yonhap rereport for a South Korean audience: 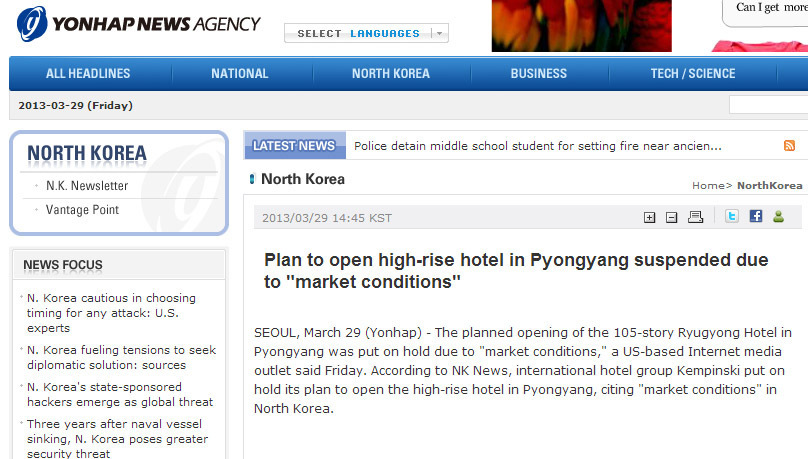 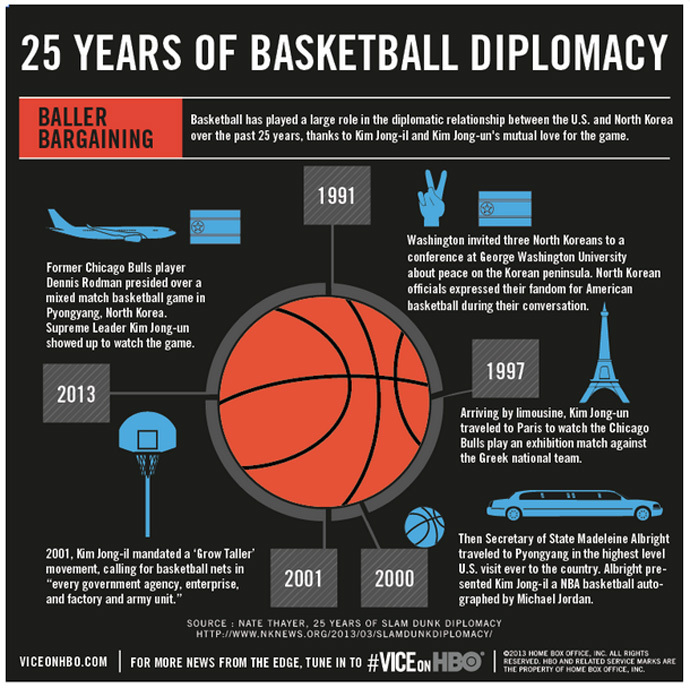 And cited by the following:

Gizmodo: First pictures in the Ryugyong, via NK NEWS

Gawker: On women in the Olympics

The Atlantic: Using the NK NEWS Exclusive on new iPad technology to emerge in the DPRK

Wired.com : An article about filesharing in North Korea 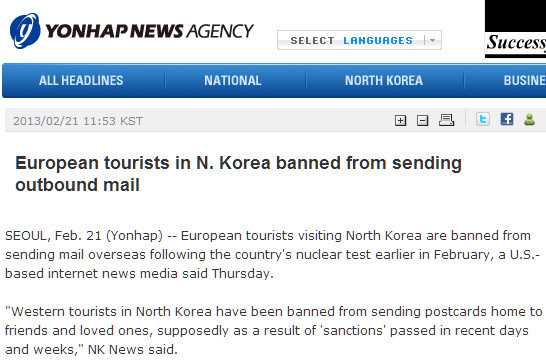 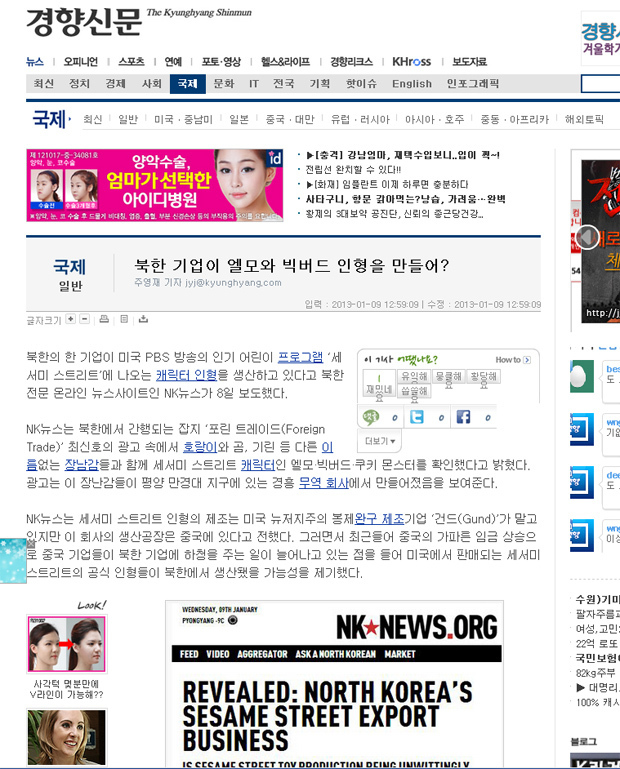