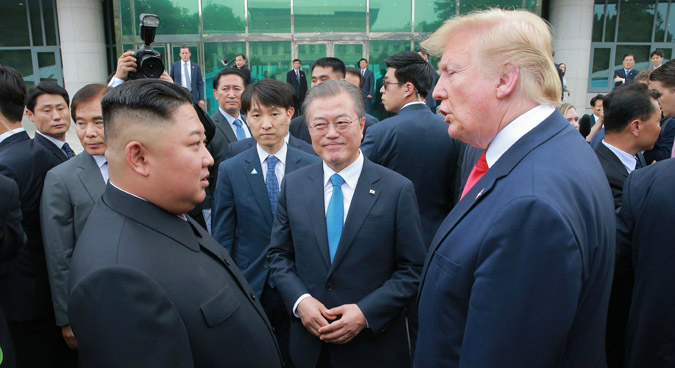 Attending Wednesday’s National Assembly interpellation session along with the Moon Jae-in administration’s foreign and defense ministers, Chung also reported to lawmakers that there were no government-level contacts between the two Koreas regarding a potential joint quarantine effort against COVID-19.

“The U.S. presidential election is coming up, and also, the two sides have not overcome hardships of the Hanoi Summit last time,” Chung said, adding that recent remarks from U.S. and North Korean officials show that both sides have not completely given up on talks.

South Korean foreign minister Kang Kyung-wha also attended the interpellation session on Wednesday and said that U.S. Deputy Secretary of State Stephen Biegun’s visit to Seoul confirmed that Washington may consider a “flexible approach” to dialogue and denuclearization with the North.

Kang, however, criticized a recent article by Harry Kazianis of the Center for the National Interest, stating that the article“included parts that were not factual.”

Last week, the article claimed that the Trump administration is considering “new proposals” for a deal with the North in a potential summit this Fall.

On the inter-Korean front, Prime Minister Chung Sye-kyun told lawmakers that there were no “government-level signals” made between the two Koreas regarding a potential quarantine cooperation to jointly respond to the global COVID-19 pandemic, despite Kim Jong Un’s recent focus on the construction of health care facilities in Pyongyang.

Asked about the possibility of the South Korean Prime Minister holding talks with his counterpart in the North, Chung said that it is “realistically not easy to execute” as it is unlikely that the North will respond.

On the joint drills with the United States, the defense minister stressed that it is a “necessary exercise” for the sake of maintaining South Korea’s national security and its joint defense readiness position. Jeong added that such combined trainings are needed to ensure the smooth transfer of wartime operational control (OPCON) to South Korea.

Jeong on Wednesday reiterated, however, the point made in the joint statement with his U.S. counterpart Mark Esper the previous day: The COVID-19 situation should be taken into consideration when the allies make decisions — including the upcoming U.S.-ROK drills next month.

However, the joint training sessions that the United States and ROK routinely conduct are “all being held” per usual, Defense Minister Jeong told lawmakers.

Thae aimed his questions towards the Moon Jae-in administration, speaking up on issues of national security and North Korea. Thae criticized the administration and the ruling Democratic Party for pushing for an ‘End of War Declaration’ while the North has not yet discarded its nuclear weapons program.

Prime Minister Chung, however, reiterated that the declaration to end the Korean War could be a starting point for resuming progress towards denuclearization and could ultimately bring Pyongyang back to the dialogue table.

South Korean Prime Minister Chung Sye-kyun told lawmakers on Wednesday that it's unclear whether another U.S.-DPRK summit will take place this year.

Attending Wednesday's National Assembly interpellation session along with the Moon Jae-in administration's foreign and defense ministers, Chung also reported to lawmakers that there were no government-level contacts between the two Koreas regarding a potential joint quarantine effort against COVID-19.