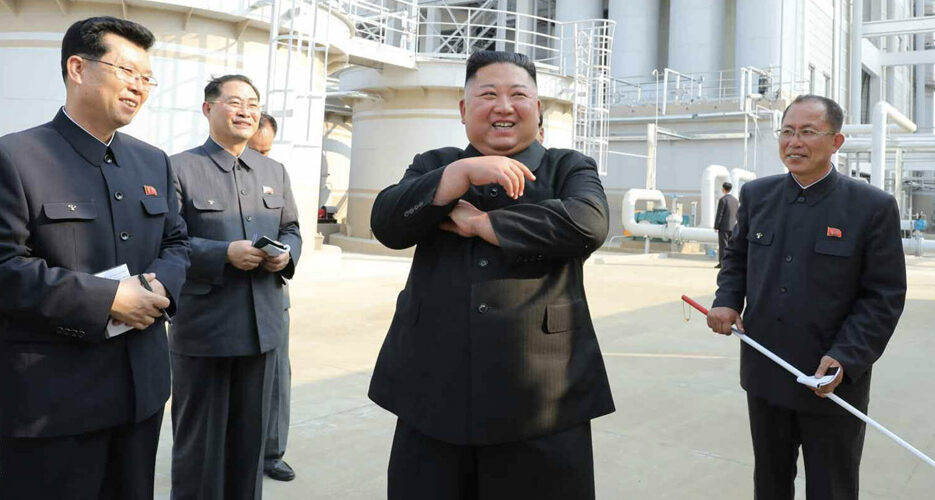 Russia’s ambassador to North Korea on Monday rejected rumors that Kim Jong Un is in poor health, calling the claims “groundless” and insisting that life continues as normal in the DPRK.

In a wide-ranging interview with the state-run TASS Russian News Agency, Ambassador Alexander Matsegora told TASS First Deputy Director-General Mikhail Gusman — who visited Pyongyang last year — that he has found no evidence of anything unusual underway in the North.

“I am sure that these are baseless rumors,” Matsegora said. “The country is functioning normally.”

The Russian ambassador’s comments follow renewed speculation about the North Korean leader’s whereabouts, which came to center when Japan’s defense minister stated that Tokyo had “suspicions” about his health during a press briefing on June 25.

Data from NK News’s sister site, NK Pro, also revealed that Kim only appeared a total of seven times in April, May, and June — a significant drop from the 46 appearances he made on average during the same three-month period between 2012 and 2019.

Although photos taken of Kim at a May 1 ribbon-cutting ceremony calmed previous rumors that he died, the overall low frequency of the North Korean leader’s appearances over the past three months is raising questions about what’s going on in Pyongyang.

Ambassador Matsegora admitted that Kim is indeed making fewer public appearances than usual, but he still insisted that government work continued as normal in Pyongyang.

“[Kim] makes decisions — his decrees are published,” he said on Monday. “The most important thing is that the country lives calmly.”

“The state is functioning, and there are indirect signs — we record them — which indicate that nothing extraordinary is happening in the country. Everything is going normally, as usual,” Matsegora added.

The ambassador also rebuked rumors that the leader’s sister, Kim Yo Jong, is being groomed to replace her brother.

“There is absolutely no reason to talk about this,” Matsegora said. “No one will dare to call themselves ‘number two’ in this state.”

“There is only ‘number one’: the head of state, comrade Kim Jong Un,” he continued. “I think, if you asked comrade Kim Yo Jong if she was ‘number two,’ she would categorically reject it.”

Kim Yo Jong, who is believed to serve a key role in either the North Korean ruling party’s Organization and Guidance Department (OGD) or the United Front Department (UFD), emerged as an increasingly-influential official in a recent inter-Korean spat this month.

North Korea claims the recent escalation in tensions was provoked, in part, by Seoul’s failure to stop activist groups from launching balloons carrying anti-regime leaflets over the border. But when asked to comment on the matter, Matsegora urged the two sides to de-escalate through a “common language.”

However, Matsegora also condemned what he called the “unscrupulous, offensive propaganda” allegedly carried on leaflets sent to the North by the Fighters for a Free North Korea (FFNK) activist group on May 31.

Those leaflets, he said, “caused discontent and serious indignation in the DPRK” and featured the “wife of the leader.”

The ambassador’s remarks may be referring to a leaflet widely circulated in South Korean media, purported to have been sent to the North by FFNK. The leaflet depicted DPRK first lady Ri Sol Ju and the late ROK President Roh Moo-hyun in what looks like a pornographic DVD cover.

But FFNK insisted it did not send that leaflet.

Nevertheless, Matsegora said on Monday that the recent launches were a “last straw” for North Korea following more than a year of stasis in talks with the South.

“We have witnessed how the détente on the Korean Peninsula, which was initiated by the DPRK, unfortunately ended without result,” he said. “It would have been good if they had succeeded, our Korean friends in the North and South. But this did not happen.”

Russia's ambassador to North Korea on Monday rejected rumors that Kim Jong Un is in poor health, calling the claims "groundless" and insisting that life continues as normal in the DPRK.

In a wide-ranging interview with the state-run TASS Russian News Agency, Ambassador Alexander Matsegora told TASS First Deputy Director-General Mikhail Gusman — who visited Pyongyang last year — that he has found no evidence of anything unusual underway in the North.