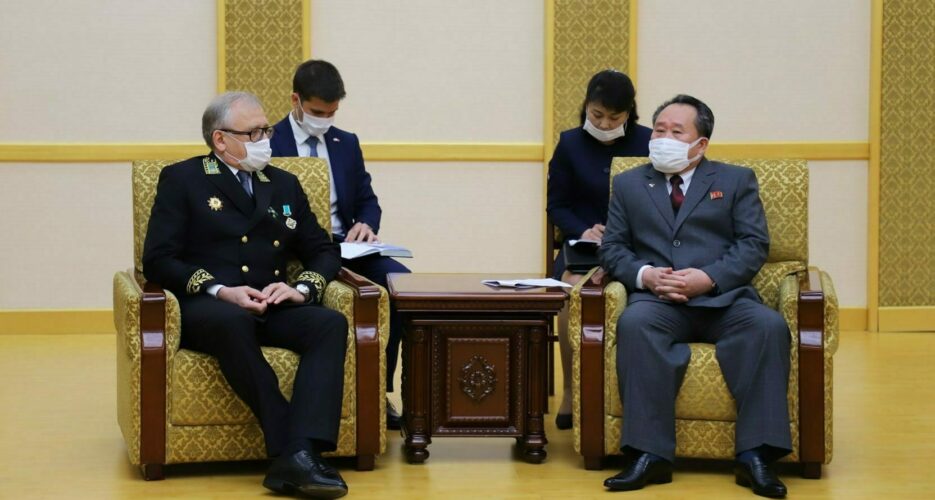 Ri had made other appearances in Pyongyang recently, but had not been seen meeting with foreign diplomats since the DPRK went into partial lockdown in late January to prevent the spread of the novel coronavirus.

In late January, just after he was officially announced as having been appointed the country’s new foreign minister, Ri Son Gwon told diplomats in Pyongyang he was ready to enhance cooperation but also defend against “anti-DPRK barbaric sanctions and pressure of the hostile forces.”

Matsegora met Ri this week on occasion of the 75th anniversary of Nazi Germany’s surrender in World War II, in order to award DPRK leader Kim Jong Un a medal for his contributions to Soviet soldier memorials and gravesites on North Korean territory.

The memorials have seen collaborative restoration work in recent years, as a large Soviet war memorial which occupies a prominent spot in central Pyongyang was renovated two years ago, and another in the east coast city of Hamhung was subsequently renovated last summer.

The two in their meeting Tuesday also reportedly discussed bilateral ties, promising “to continue active efforts to consistently implement” agreements made between Kim and Russian President Vladimir Putin at their summit in Vladivostok one year ago.

Both Ri and Matsegora, as well as all others attending the meeting, were seen in photos released by the Russian embassy wearing medical masks as part of remaining COVID-19 precautions.

The North Korean leader was previously invited to attend a large military parade in Moscow on May 9 for the Victory Day anniversary, but he was not reported to have responded, and the event has been postponed due to COVID-19.

The virus has also been the source of apparent frustration for the Russian side in Pyongyang, with the DPRK foreign ministry in early February announcing they could no longer meet in person with foreigners.

Foreign missions would instead have to submit correspondences to a special mailbox at the ministry, leading Matsegora to remark in an article later that month his embassy was “unable to properly perform its functions.”

Bilateral Pyongyang-Moscow ties and joint projects are likely to still face difficulties this year, however, due to North Korea’s ongoing border lockdown as part of COVID-19 measures.

One such project, a long-discussed plan for a new road bridge across the narrow DPRK-Russia border, has so far failed to materialize, even as work to connect a new DPRK-China cross-border bridge has continued unabated under coronavirus restrictions in recent months.

A UN sanctions measure banning North Korean workers from working in Russian territory or elsewhere in UN member state territory has also reduced bilateral economic cooperation, though the two may have also found a workaround on that matter, according to the latest immigration statistics.

The next known scheduled exchange between the two sides would be a visit by a delegation of the Russian Communist Party to North Korea’s planned large-scale events in October for its 70th ruling party foundation day, as long as borders are reopened in time.

Ri had made other appearances in Pyongyang recently, but had not been seen meeting with foreign diplomats since the DPRK went into partial lockdown in late January to prevent the spread of the novel coronavirus.