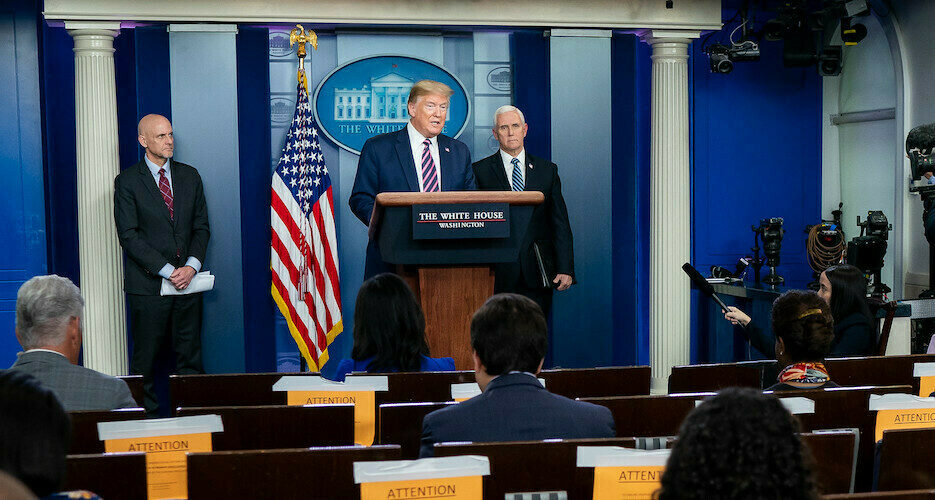 U.S. President Donald Trump said Monday that he has a “very good idea” about North Korean leader Kim Jong Un’s health, despite a near-total information blackout from Pyongyang about the Supreme Leader’s whereabouts.

Speaking at a daily coronavirus news conference, the President’s comments appear to suggest that the administration seems to have at least some knowledge of Kim Jong Un’s current state, even as wildly diverging rumors about his health continue to spread.

Kim has been out of the public eye since April 12, when North Korea’s state media reported he had attended a meeting of the country’s ruling party Politburo.

“I can’t tell you exactly,” Trump said in response to a question about Kim’s health on Monday. “Yes, I do have a very good idea, but I can’t talk about it now.”

“I just wish him well. I’ve had a very good relationship with Kim Jong Un.”

Trump then said the U.S. would be at war with North Korea if he hadn’t been elected president — a talking point he often repeats when speaking about the DPRK.

“I hope he’s fine,” he added. “I do know how he’s doing, relatively speaking. We will see. You’ll probably be hearing it in the not too distant future.”

A few minutes later, Trump was asked a second North Korea question, regarding comments that U.S. Senator Lindsey Graham had made on Fox News on Saturday claiming that the DPRK leader might not be alive.

Graham, one of Trump’s closest allies in Congress, told Fox News, “I’ll be shocked if he’s not dead or in some incapacitated state.”

Trump appeared to have misheard the question, however.

“Nobody knows where he is,” he said, “so he obviously couldn’t have said it.”

“If you have — this is breaking news — that Kim Jong Un made a statement on Saturday,” the President added. “I don’t think so.”

Trump’s comments on Monday were his third since reports first emerged suggesting that Kim Jong Un may have had surgery.

Last Monday, hours after the news became public — first in the Seoul-based website Daily NK, and then with new reporting from CNN that Kim’s health may be in “grave danger” after surgery — Trump said “we don’t know” about the DPRK leader’s current health status.

“I wish him well, because if he is in the kind of condition that the reports say, that the news is saying, that would be a — that’s a very serious condition, as you know,” the President said at the time.

On Thursday, Trump followed up by calling the CNN report earlier in the week “incorrect” and “fake.”

U.S. President Donald Trump said Monday that he has a "very good idea" about North Korean leader Kim Jong Un's health, despite a near-total information blackout from Pyongyang about the Supreme Leader's whereabouts.

Speaking at a daily coronavirus news conference, the President's comments appear to suggest that the administration seems to have at least some knowledge of Kim Jong Un's current state, even as wildly diverging rumors about his health continue to spread.