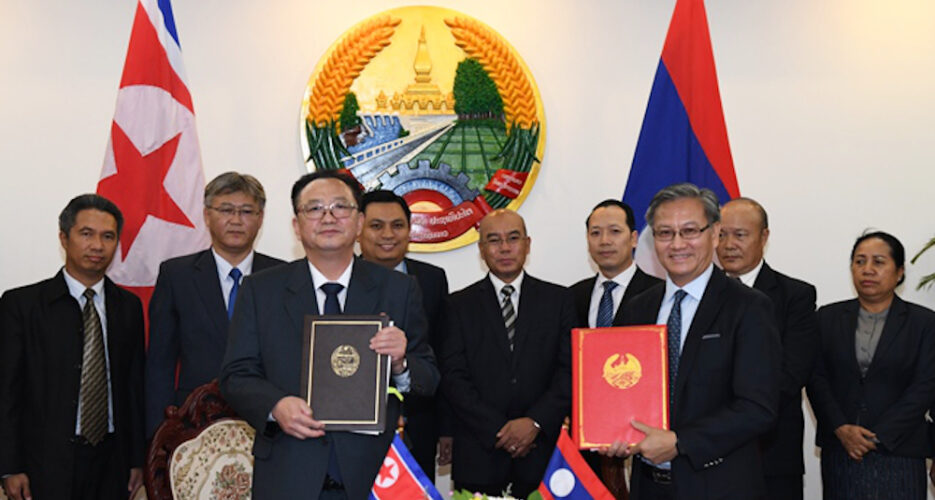 The foreign ministries of North Korea and Laos signed a new cooperation agreement last week in Vientiane to replace the previously expired one, according to press releases from both countries.

North Korea’s Ministry of Foreign Affairs (MFA) released a statement on Tuesday evening calling it an “Agreement on Cooperation” with the Lao People’s Democratic Republic MFA, that “would make an important contribution to further consolidating and developing the friendly relations.”

The new agreement, it said, is intended to replace one signed between the two parties in 1990 but which has since expired.

Neither press release elaborated on the details of the agreement beyond stating their shared intention to deepen cooperation, especially between the two foreign ministries.

It comes as both sides have continued to expand cooperation and exchanges in recent years, with multiple high-level visits in 2019 alone.

Former top diplomat in the North’s Workers’ Party of Korea (WPK) Ri Su Yong traveled to Vientiane in March 2019 where he met with Lao PDR President Bounnang Vorachith and signed an “agreement on exchange and cooperation” between the two ruling parties.

A delegation from the North Korean Central Court also traveled to the Lao capital last May, where a memorandum of understanding (MOU) was signed with the Lao People’s Supreme Court.

Most recently, DPRK vice foreign minister Ri Kil Song led a delegation to Vientiane and other Southeast Asian states in November and met with Phomvihane, the deputy foreign minister who signed the agreement last week.

Economic cooperation and investment were reportedly subjects under discussion in those meetings, according to reports from the Lao MFA at the time, despite these activities being largely hindered by UN sanctions with which Laos has declared compliance.

And while recent bilateral trade statistics are unavailable, there is at least some evidence that Laos has not complied with the sanctions requirement to close DPRK businesses and send all North Korean workers home.

This requirement went into effect at the end of December, but the two sides celebrated the 78th birthday of former DPRK leader Kim Jong Il at a North Korean-run restaurant in the Lao capital on February 14, according to images included in a Lao News Agency (KPL) Facebook post.

That restaurant, the Paektu-Hanna Restaurant (also called the Pyongyang Restaurant in adjacent signage on site), was also shown to be open in late February in a blog post by a South Korean tourist.

The blog’s author said waitresses were wearing masks due to the coronavirus situation and that they only took them off to perform a shortened 15-minute version of the typical 30-minute North Korean musical show.

Photos included in the post showed mask-wearing waitresses and a nearly empty restaurant.

Laos reportedly submitted their final mandatory UN sanctions implementation report on the DPRK laborers requirement just before the deadline on March 20, but, unusually, joins China and Mongolia as the only countries to avoid uploading their reports to the sanctions committee’s public website.

Their last available implementation report was submitted in April 2018 and covered their plans to comply with the ban on DPRK laborers.

“Regarding employment, the work authorizations granted by the Lao People’s Democratic Republic to nationals of the Democratic People’s Republic of Korea prior to the adoption of resolution 2397 (2017) will expire by the end of 2018 and will not be renewed,” it said.

It also stated, without specifying a time period, that “there has been no trade in, or exchange of, goods between the Lao People’s Democratic Republic and the Democratic People’s Republic of Korea.”

“The Lao People’s Democratic Republic reaffirms its commitment to implementing Security Council resolutions and reiterates its consistent support for peace, stability and denuclearization on the Korean Peninsula and for resolving disputes by peaceful means.”

Other North Korean cooperative entities or joint ventures said to be still operating in Laos in violation of sanctions were specified in the March 2019 Panel of Experts report of the UNSC committee in charge of monitoring DPRK sanctions.

These included resident offices for “investment analysts” on construction infrastructure and hydro power, a “program design consultant,” and a pharmaceuticals company, in addition to at least two restaurants.

Last week’s agreement was the first such new bilateral document known to be signed by the DPRK foreign ministry this year, coming after major personnel shakeups at the end of 2019 which saw Ri Son Gwon replace Ri Yong Ho to lead a potentially new direction for the MFA.

The foreign ministries of North Korea and Laos signed a new cooperation agreement last week in Vientiane to replace the previously expired one, according to press releases from both countries.

North Korea’s Ministry of Foreign Affairs (MFA) released a statement on Tuesday evening calling it an “Agreement on Cooperation” with the Lao People's Democratic Republic MFA, that “would make an important contribution to further consolidating and developing the friendly relations.”