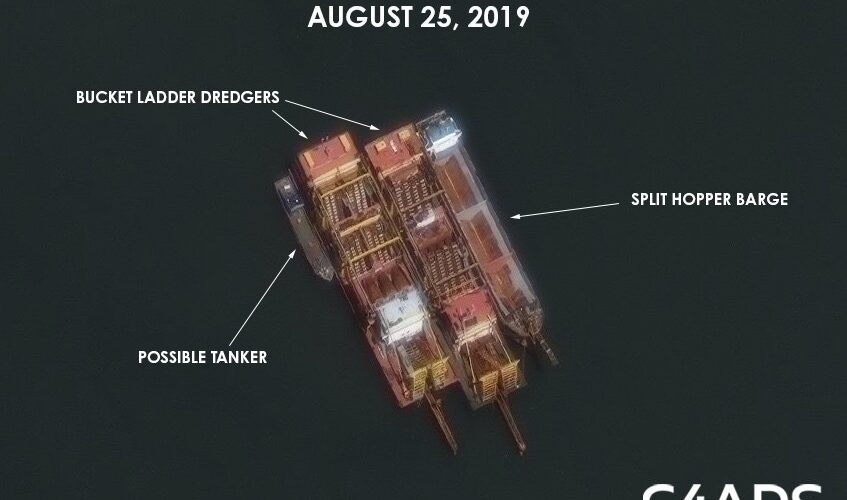 A fleet of almost 300 ships without international identifiers traveled to the waters just off North Korea’s west-coast city of Haeju for months last year to dredge up tons of ocean sand before returning to China, a new report released Friday revealed.

Sand is a resource prohibited for export from North Korea according to UN sanctions, and the dredging operation, detailed in up-close satellite images and ship activity heat maps by the U.S.-based organization C4ADS, could constitute a major sanctions breach.

According to C4ADS, 279 unique Automatic Identification System (AIS) numbers representing various kinds of ships were found to have traveled to the Haeju Bay between March and August 2019 to take part in the operation — one which was likely done with at least the approval of North Korean authorities.

The ships often traveled in convoys in and out of the bay just north of the inter-Korean border and to multiple ports all along China’s coast, AIS tracking data and satellite images showed.

Satellite images also revealed the scope of the operation in the Haeju Bay with groups of barges linked up stretching multiple football fields in length.

It is still unclear what companies or organizations from either China or North Korea were involved in the operation, however, as none of the ships broadcasted International Maritime Organization (IMO) numbers typically required of vessels traveling abroad.

But the UN Security Council (UNSC) North Korean sanctions committee’s Panel of Experts (PoE) report for 2020 is expected to provide more details on China’s involvement in DPRK sand dredging when released this month, according to leaked details.

Multiple outlets reported briefly on the PoE report’s contents early last month, saying that one million tons of dredged sand worth $22 million USD were shipped directly to Chinese ports in 2019.

Information released by C4ADS on Friday appears to be the first confirmation that non-North Korean — likely Chinese — dredgers and barges were the ones doing the actual work of dredging.

Paragraph 6 of the resolution specifically refers to “earth and stone including magnesite and magnesia (HS code 25).” HS (Harmonized System) code 2505 is defined as “sands of all kinds; natural, whether or not coloured.”

If trade in North Korean sand did occur in China in 2019, it was not reflected in Chinese trade data, which has not recorded imports of HS code 2505 since 2017.

Trade in natural sands in China, however, has been said to involve illicit actors and gang activity, with the Chinese Ministry of Public Security in October 2019 — around the same time as the Haeju Bay dredging wrapped up — announcing its keen attention on such activities in the form of a crackdown on “90 groups involved in illegal sand mining during the past nine months” inside the country.

The likely reason for the inclusion of earth materials such as sand in the sanctions on North Korea — which are designed to cut off major sources of government earnings suspected of being funneled into nuclear and long-range weapons programs — is that sand has long been a hot commodity of the DPRK.

C4ADS research indicated that Chinese interest in North Korean sand dates back to the early 1990s and that sales occurred as recently as 2017, while Japan, Russia, and even South Korea have been some of the DPRK’s biggest customers for sales of the commodity in the last 30 years.

North Korean sand, believed to be used mainly in construction projects but which is also valued for its mineral contents, has also been a topic of interest in inter-Korean relations in recent years.

South Korean authorities even expressed interest in 2018 in importing sand from Haeju, where ROK ships also have a history of working from 2004-2010.

The large-scale shipping of dredged sand from the Haeju Bay to Chinese ports last year is also likely to raise questions over knowledge of South Korean authorities due to the proximity of the operation to ROK waters.

C4ADS showed in its report that the convoys of ships heading to the bay grazed the Northern Limit Line (NLL) separating North and South Korean waters, just off the coast of the South Korean islands of Baengnyeong farthest west and Yeonpyeong just across from the Haeju Bay.

The months-long operation involving hundreds of ships likely would have been noticed by South Korean military or other authorities, but it is still unclear whether the ROK or U.S. may have provided information to the UN PoE for their upcoming report.

NK News has reached out to the South Korean Ministry of National Defense (MND) for information on what was known about the operation.

A fleet of almost 300 ships without international identifiers traveled to the waters just off North Korea’s west-coast city of Haeju for months last year to dredge up tons of ocean sand before returning to China, a new report released Friday revealed.

Sand is a resource prohibited for export from North Korea according to UN sanctions, and the dredging operation, detailed in up-close satellite images and ship activity heat maps by the U.S.-based organization C4ADS, could constitute a major sanctions breach.