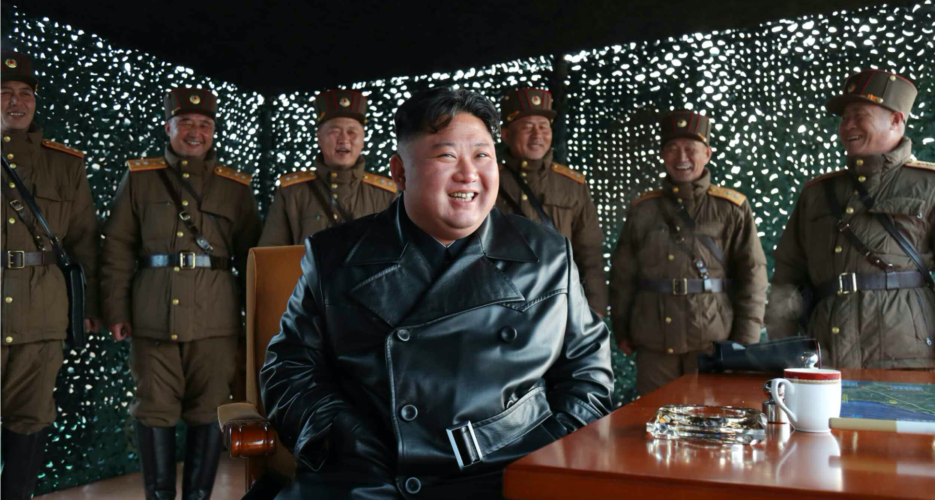 In the second high-profile military exercise by the North Korean military in as many days, DPRK state media said yesterday’s test “clearly proved the characters of different flight trajectories and falling angles, the accuracy of guided shells and their power.”

“The fire was aimed at reconfirming and showing to the Korean People’s Army (KPA) commanding officers the tactical characters and power of a new weapon system to be delivered to KPA units,” the party daily said.

Following the successful test — the third of its kind by North Korea this year — the DPRK leader was reported to have hailed the “successive birth of the new weapon systems of our style” and described the exercise as a “brilliant success.”

He then ordered that the country “further build up the striking capability” which can “wipe out any enemy out of our territory if it dare designs to launch military action against our state.”

“This is just the aim of building up our defense capability set by the Party, the most perfect strategy for national defense and most trustworthy war deterrent.”

Experts said that the “striking capability” in the Rodong are likely referring to “preemptive strike” capabilities, and that the weapons tested were likely the KN-24 type, which bear a similarity to the U.S. Army’s Tactical Missile System (ATACMS).

“KN-24 is explicitly a tactical missile— likely for use on advancing conventional forces,” Vipin Narang, Associate Professor of Political Science at Massachusetts Institute of Technology (MIT). “Hard for missile defenses to detect, track, and intercept.”

The Rodong Sinmun on Sunday reported that Kim Jong Un had said the new weapons would contribute decisively to a “radical change” in the country’s national defense strategy.

Kim Jong Un on Saturday also reportedly gave instructions on national defense science research and “the new direction to be taken by the munitions industry” in developing the country’s defense industries, according to the party daily.

Kim Jong Un was also greeted at the site by some of the country’s top defense research scientists  — including Jang Chang Ha, President of Academy of Defence Science, and Jon Il Ho, director of a research institute at Kim Chaek University of Technology.

The presence of Kim Yo Jong, the DPRK leader’s sister and a powerful official in her own right, is notable: Saturday also saw her issue a statement revealing that U.S. President Donald Trump had sent a letter to Kim Jong Un regarding cooperation in the fight against the COVID-19 virus.

That statement did not appear in Sunday’s Rodong Sinmun, however.

South Korea’s military first reported a North Korean test had taken place on Saturday morning, which reported the missiles were launched from the country’s North Pyongan Province and had flown 410 kilometers at an altitude of approximately 50 kilometers.

Seoul on Saturday urged Pyongyang to cease provocative military actions “immediately,” condemning the decision to test missiles at a time when the world is grappling with the spread of COVID-19 as “highly inappropriate.”

The missile launches follow a March 2 “firepower strike drill” of at least two types of multiple launch rocket systems (MLRS) and a March 9 test-fire of a similar system.

President Trump in the wake of that first test said he had “no reaction” to the exercise, and it now appears that the two leaders have resumed ‘letter diplomacy’ despite Pyongyang’s military exercises.

Vipin Narang of MIT said that the core message the North Koreans were aiming to convey is that “coronavirus isn’t slowing us down.”

“In Kim Yo Jong’s KCNA release, this part caught my eye: ‘however, we will never lose or waste time for nothing, but will keep changing ourselves to be more powerful for that time just as how we made ourselves for the past two years’,” he explained.

That, he told NK News on Sunday, suggested North Korea is “still expanding and improving… nuclear and missile force, even while the world deals with coronavirus.”

“North Korea to date has never carried these press statements domestically, apparently due to their sensitivities and to maintain policy flexibility,” she explained.

“I think the message of Kim’s missile test guidance report and Kim Yo Jong’s press statement is clear: if DPRK-U.S. relations improve, that is great, but as that is uncertain, North Korea will continue to follow its weapons development agenda,” Lee added.

“North Korea appears to have timed Kim Yo Jong’s message with the report on yesterday’s missile test to underscore the point that Kim-Trump personal ties will not be enough to improve diplomatic relations.”

In the second high-profile military exercise by the North Korean military in as many days, DPRK state media said yesterday's test "clearly proved the characters of different flight trajectories and falling angles, the accuracy of guided shells and their power."