No mention of North Korea in Trump’s third State of the Union Address
Speech departed from previous two addresses, both of which made prominent mention of DPRK issue
Jacob Fromer February 4, 2020 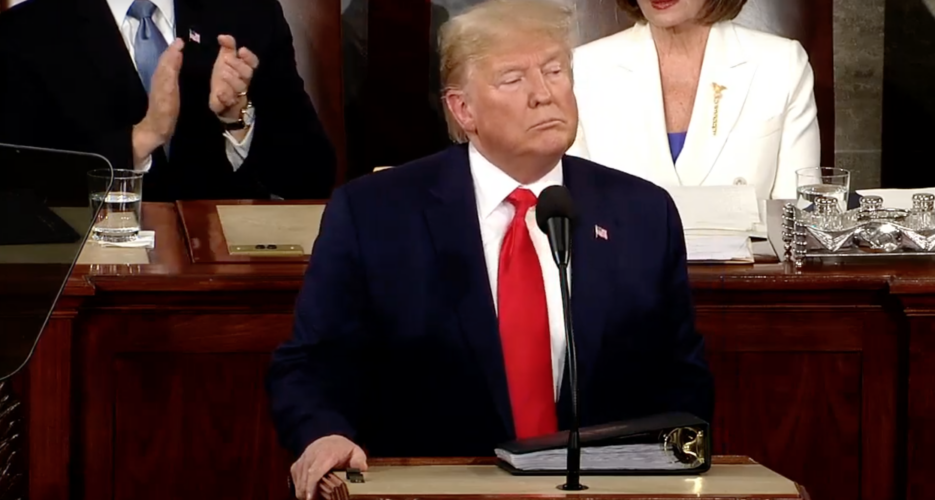 U.S. President Donald Trump made no mention of North Korea during his third State of the Union speech on Tuesday, following months of diplomatic stalemate between Washington and Pyongyang and marking a striking departure from his previous two addresses to Congress.

Speaking to lawmakers from both the House of Representatives and the Senate, the U.S. President discussed a range of issues — including many related to foreign policy — but did not choose to address North Korea, one of the defining foreign policy issues of his presidency.

Neither the White House nor the U.S. State Department responded to NK News inquiries about why the North Korea issue was left out of the speech.

The White House on Thursday, however, sent reporters a memo listing what it described as the President’s foreign policy successes during his term — a list which cited the Korean peninsula.

The administration has also frequently touted its purported successes in dealing with Pyongyang, with Trump having in 2018 even famously proclaimed that there was “no longer” a nuclear threat to North Korea.

Both the President’s previous addresses to Congress, too, have featured North Korea heavily.

In 2018, at his first State of the Union Address, Trump invited Ji Seong-ho, a North Korean escapee, and the parents of Otto Warmbier, an American college student who was imprisoned in the North and died shortly after his release.

He spoke at length about both of their stories, even linking Ji Seong-ho’s tale to what he described as America’s own “yearning for freedom.”

“No regime has oppressed its own citizens more totally or brutally than the cruel dictatorship in North Korea,” Trump said at the time. “We need only look at the depraved character of the North Korean regime to understand the nature of the nuclear threat it could pose to America and to our allies.”

The following year, Trump spoke about “our historic push for peace on the Korean Peninsula,” and announced plans for a second summit with Kim Jong Un.

“If I had not been elected President of the United States, we would right now, in my opinion, be in a major war with North Korea with potentially millions of people killed,” the President said in that address.

“Much work remains to be done, but my relationship with Kim Jong Un is a good one.”

Trump has met with DPRK leader Kim Jong Un twice since then, but the two nuclear-armed nations have not met face-to-face since October.

And while the President has continued to tout his “great” relationship with the North Korean leader, the two countries vehemently disagree over the fate of the DPRK’s nuclear program, sanctions relief, and the U.S. military presence on the Korean peninsula.

One former U.S. government official told NK News that the decision to leave North Korea out of this year’s State of the Union could be motivated by political and diplomatic concerns.

“It could reflect the fact that there has been little progress on North Korea in the last year, President Trump’s growing focus on domestic considerations given the impeachment and the upcoming election, or simply an outcome of the cumbersome bureaucratic process in the U.S. government that ultimately decides what issues have to get priority in the State of the Union,” said Mintaro Oba, a former U.S. State Department Korea Desk officer.

“North Korea got surprisingly little attention at the UN General Assembly in September, too, so a downplaying of the issue by the Trump administration in the last year is not new,” he added.

Tuesday’s State of the Union marked the first time a President has chosen not to raise the issue of North Korea since 2016, when then-President Barack Obama chose not to address the issue in a speech just days after the DPRK’s fourth nuclear test.

Deputy national security adviser Ben Rhodes at the time said that the decision had been made to avoid giving Pyongyang “attention.”

Trump did make one oblique reference to the Korean peninsula in his 78-minute speech on Tuesday — though his remarks focused on the South, not the North.

“We are also getting our allies, finally, to help pay their fair share,” he said, a likely reference to the Trump administration’s negotiations with South Korea over how much Seoul should have to pay for the U.S. military presence on the Korean peninsula.

U.S. President Donald Trump made no mention of North Korea during his third State of the Union speech on Tuesday, following months of diplomatic stalemate between Washington and Pyongyang and marking a striking departure from his previous two addresses to Congress.Speaking to lawmakers from both the House of Representatives and the Senate, the U.S. President discussed a range of issues --