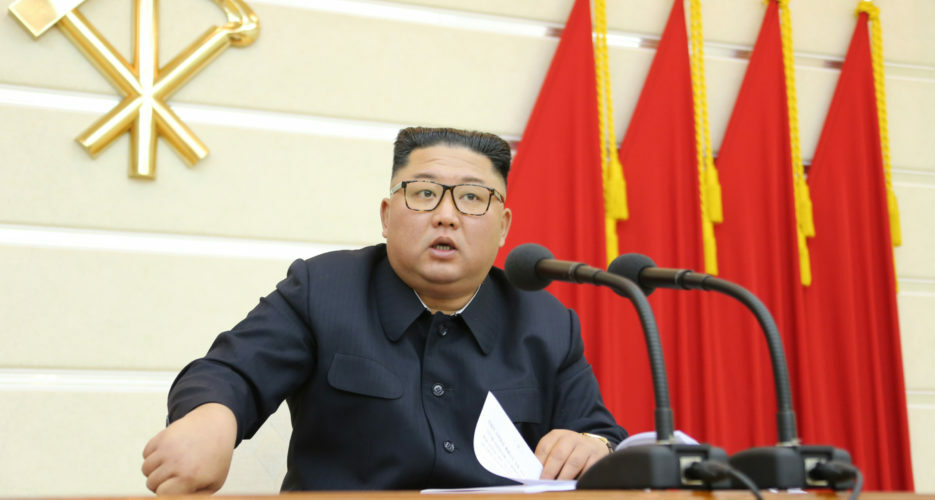 At the meeting held on an unspecified recent date, Kim was said to have discussed “acts alien to the party, abuse of power, practices of privileges, indulgence in bureaucracy, corruption and irregularities revealed among senior officials of the Party Central Committee.”

Along with “officials of the Party cadre training institution” also said to be involved in such corruption, they were “harshly criticized” by Kim Jong Un “and their gravity and consequences were sharply analyzed,” the Rodong reported on its front page.

The two top officials who were said to be dismissed by the Politburo were named as Ri Man Gon and Pak Thae Dok, who were both Workers’ Party of Korea (WPK) Central Committee (CC) vice-chairmen.

Ri Man Gon’s position as member of the State Affairs Commission (SAC) was not mentioned but may also be in jeopardy, along with his role as director of the Organization and Guidance Department (OGD) under the WPK CC.

The meeting also reportedly “adopted a decision to disband the party committee of the Party cadre training base which was involved in the practices of corruption and irregularities, and to impose relevant penalty.”

Details of the corrupt acts were not provided in the article, but they were described partly as “unpopular and anti-socialist acts,” and Kim Jong Un reportedly called on attendees to learn from a related “recent incident.”

“No special cases must be allowed within the state anti-epidemic system,” Kim reportedly said in the meeting, possibly linking the corruption to the strict coronavirus (COVID-19) prevention measures.

Kim stressed, the report said, “the need to set up a strict discipline by which all the fields and units of the country unconditionally obey to the command and control of the Central Headquarters for the emergency anti-epidemic work and thoroughly execute instructions from it, and to further tighten the system of reporting to the Party and legal surveillance.”

State media in recent days and weeks has also called out citizens for not obeying coronavirus prevention measures, and urged medical workers to treat the situation more seriously.

Tasks discussed at the recent Politburo meeting regarding strengthening coronavirus prevention measures included plans to “supplement and complement the law on the state emergency anti-epidemic and to readjust state crisis control regulations.”

Kim Jong Un also appeared to applaud but also urge strengthening of testing and quarantine measures that are “already in place,” and to continue to “seal off all the channels” through which the virus may enter the country — a reference to plans to maintain border closures.

“In case the infectious disease spreading beyond control finds its way into our country, it will entail serious consequences,” Kim reportedly said.

“The strong measures taken by our Party and the government from the beginning have been the surest and highly reliable, preemptive and decisive preventive measures.”

Kim added that the measures — which included shutting down tourism and effectively closing its borders in late January — were taken because “this viral infection spreads so rapidly, its incubation period is uncertain and its contagion route is also scientifically uncertain.”

North Korean media still maintains there are no cases of infection from the COVID-19 in the country, despite growing numbers of cases in neighboring South Korea, Japan, and China.

Some additional measures taken in recent days include delaying the start of the school year for most students and shutting down public amenities such as the brand new Yangdok Hot Springs Resort.

As for the economic impact of the coronavirus on North Korea, Kim Jong Un appeared to acknowledge the connection but also urged the completion of economic tasks despite the disruption.

Saturday’s Rodong report said that “the meeting also stressed the issue of tightening economic organization and anti-epidemic work under the prevailing situation and conditions so as to accomplish this year’s goals without fail and to thoroughly ensure the life and security of the people.”

Related to these goals, the meeting also reportedly covered ongoing plans to build “dwelling houses” for ordinary people in Pyongyang and across the country.

Meanwhile, Kim Jong Un was reported on page two of the Rodong to have led a “joint strike drill” on the eastern coast on Friday, the one-year anniversary of the Hanoi Summit with U.S. President Donald Trump.

At the meeting held on an unspecified recent date, Kim was said to have discussed “acts alien to the party, abuse of power, practices of privileges, indulgence in bureaucracy, corruption and irregularities revealed among senior officials of the Party Central Committee.” 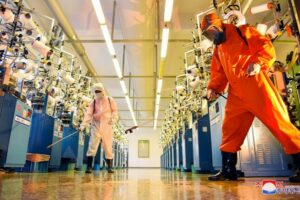 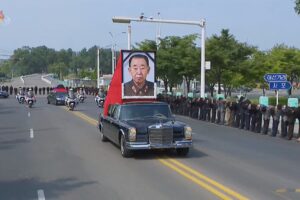 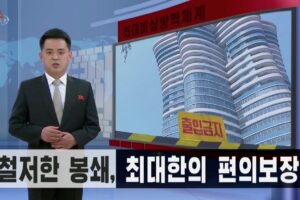