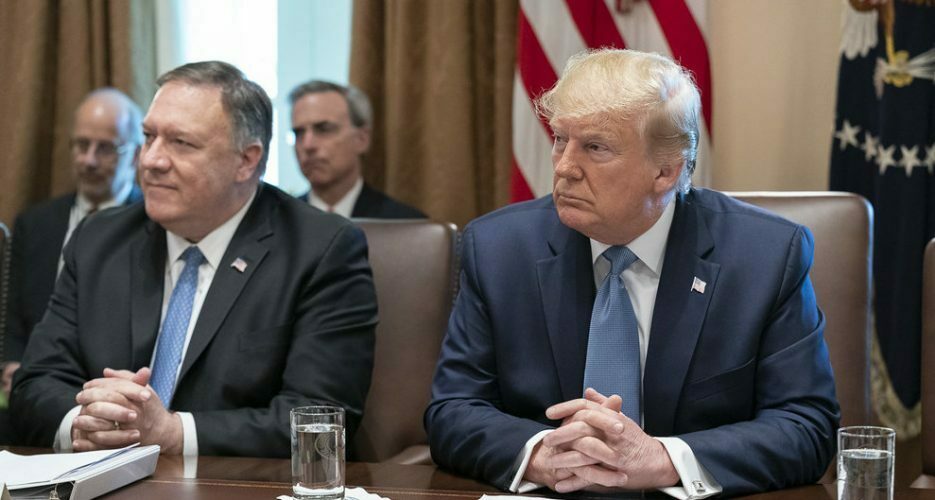 Responding to North Korea’s announcement of a shift to a more aggressive policy towards Washington, U.S. President Donald Trump and Secretary of State Mike Pompeo on New Year’s Eve offered media brief reactions largely dismissing the shift as a concern.

DPRK leader Kim Jong Un announced in a plenum speech released Wednesday morning that the country intends to step up military pressure on Washington through “developing strategic weapons,” putting “on constant alert [our] powerful nuclear deterrent,” and making a “shift to a shocking actual action to make [the U.S.] pay for the pains sustained by our people.”

Kim also said the country should expect challenging economic times while it resigns to life under sanctions, expecting that they will not be lifted by the U.S. as Pyongyang, too, digs in and declares it has no intention to bow to Washington’s denuclearization demands.

Answering questions before entering a New Year’s Eve party at his Mar-A-Lago property in Florida, President Trump mentioned familiar talking points regarding his relationship with Kim and expectations over the Singapore agreement signed after their first summit in June 2018.

He did not appear to suggest he had reviewed Kim’s plenum speech, which had only been released a couple of hours before.

“We’ll see, I have a very good relationship with Kim Jong Un,” Trump said, before repeating a remark which attracted attention on Christmas Eve that he hopes Kim Jong Un’s so-called “Christmas present is a beautiful vase … as opposed to something else.”

Then pointing to the Singapore agreement, Trump said that Kim Jong Un “did sign a contract, he did sign an agreement, talking about denuclearization.”

Denuclearization was referenced at the end of the first paragraph in the Singapore Joint Statement, saying that “President Trump committed to provide security guarantees to the DPRK, and Chairman Kim Jong Un reaffirmed his firm and unwavering commitment to complete denuclearization of the Korean Peninsula.”

“If Chairman Kim has reneged on the commitments he made to President Trump, that is deeply disappointing,” Pompeo said, responding to a remark from interviewer Major Garrett of CBS Evening News that “North Korea is ending its moratorium on nuclear and ballistic missile testing.”

It appears that Pompeo had also not yet reviewed Kim’s speech, while there has also been some debate over what the North Korean leader meant in the plenum speech regarding his April 2018 self-imposed moratorium on nuclear and intercontinental ballistic missile (ICBM) testing.

Kim said Wednesday that “under such condition” of having halted these tests while receiving only perceived provocations from the U.S., “there is no ground for us to get unilaterally bound to the commitment any longer” — leaving open the option for the U.S. to still offer significant concessions, however unlikely.

“He made those commitments to President Trump in exchange for President Trump agreeing not to conduct large-scale military exercises. We’ve lived up to our commitments. We continue to hold out hope that he’ll live up to his as well.”

Pompeo appears to be referring to Trump’s claim of verbal agreements made during the Singapore summit but which weren’t included in the Joint Statement.

Referring to a halt in ICBM and nuclear tests since late 2017, as Kim promised in April just months before the Singapore summit, Trump said in a post-summit press conference that Kim also agreed with him personally on this testing halt, but that it had “not been written into the contract.”

The details on this informal agreement were never put in writing by both sides, but Trump appeared throughout the press conference in June 2018 to focus on his securing of promises from Kim to dismantle a rocket engine testing site — one which was officially reactivated last month.

Trump and Pompeo both before and after the summit had also been referring to Kim’s self-imposed testing moratorium as a concession won from North Korea.

Pompeo in another interview with Fox News on Tuesday said he was “hopeful that … Chairman Kim will make the right decision and he’ll choose peace and prosperity over conflict and war.”

NK News has reached out to the State Department for further clarification and reaction to North Korea’s policy announcements made Wednesday.

Responding to North Korea’s announcement of a shift to a more aggressive policy towards Washington, U.S. President Donald Trump and Secretary of State Mike Pompeo on New Year’s Eve offered media brief reactions largely dismissing the shift as a concern.DPRK leader Kim Jong Un announced in a plenum speech released Wednesday morning that the country intends to step up military pressure on