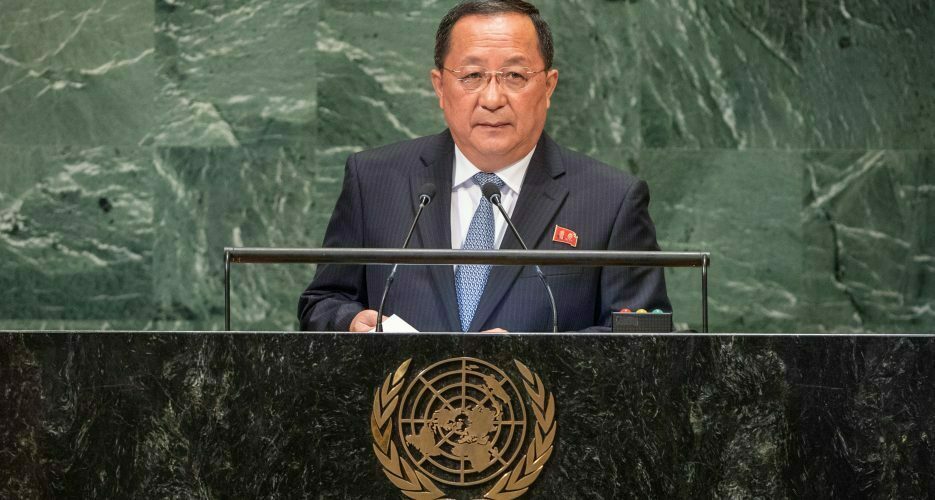 Update on Sunday, January 19: This article has been updated to include the name of the alleged new post-holder.

North Korea’s foreign minister Ri Yong Ho has been replaced, sources in Pyongyang confirmed to NK News, in a major political reshuffle which could have a significant impact on the country’s diplomatic stance going forward.

He will be replaced by Ri Son Gwon, multiple informed sources told NK News, the former chairman of the Committee for the Peaceful Reunification of the Country (CPRC).

Ri Son Gwon, who played a prominent role in inter-Korean talks in early 2018, also previously served as an official at the Policy Department of the now-defunct National Defence Commission (NDC).

And he was once known as the right-hand man of Kim Yong Chol, director of the United Front Department, and appeared at a second round of inter-Korean working-level military talks in October 2006

While serving as a Senior Colonel in the Korean People’s Army (KPA) and in his aforementioned NDC role, Ri notably participated in a news conference in May 2010 in response to the Lee Myung-bak administration’s claim that the North was responsible for the Cheonan warship incident.

While official North Korean state media is yet to confirm the name of Ri’s replacement, it is thought his identity will be revealed on or before an event for resident diplomats scheduled to take place in Pyongyang on January 23.

He served as the DPRK’s foreign minister during a time of unprecedented diplomatic outreach by Pyongyang, accompanying leader Kim Jong Un on summits with U.S., South Korean, Russian, Chinese, and Cuban leaders in the last two years.

He also acted as one of the top spokespersons for North Korea throughout that time, most notably at a press conference following the failed DPRK-U.S. summit in Hanoi last February.

But his absence from a group photo of top ruling party officials at a meeting earlier in January raised speculation that he may have been replaced, amid a broader political reshuffle that saw notable promotions and possible demotions of prominent figures in North Korea’s military, cabinet, and more.

South Korea’s unification ministry told NK News on Sunday that it is “checking into the reports on the replacement of the North Korean foreign minister and is paying attention whether Ri Son Gwon’s post has been changed.”

News of the replacement comes as South Korea’s Yonhap News said on Saturday that North Korean ambassadors to China and the UN had been spotted returning to Pyongyang earlier the same day.

“Some 10 other North Korean diplomats accompanied the top envoys on the flight,” the Yonhap report said.

Japanese broadcaster NHK said the DPRK Ambassador to Angola had been spotted among the group and said “the envoys are expected to attend a meeting to discuss foreign policy.”

NK News exclusively revealed last August that Ri would not be going to New York City to deliver a speech at the UN General Assembly in September.

Ri Son Gwon was last seen taking notes in a broadcast of a plenary meeting of the ruling Workers’ Party’s Central Committee just before the end of December, Yonhap News said in monitoring analysis of the event.

It had been “Ri’s first appearance in state media since his name last appeared in April (2019) when the North’s official Korean Central News Agency reported his election as a member of the parliament’s foreign affairs committee during a key assembly session,” Yonhap said at the time.

Oliver Hotham contributed to this report

Update on Sunday, January 19: This article has been updated to include the name of the alleged new post-holder.North Korea's foreign minister Ri Yong Ho has been replaced, sources in Pyongyang confirmed to NK News, in a major political reshuffle which could have a significant impact on the country's diplomatic stance going forward.He will be replaced by Ri Son Gwon, multiple informed