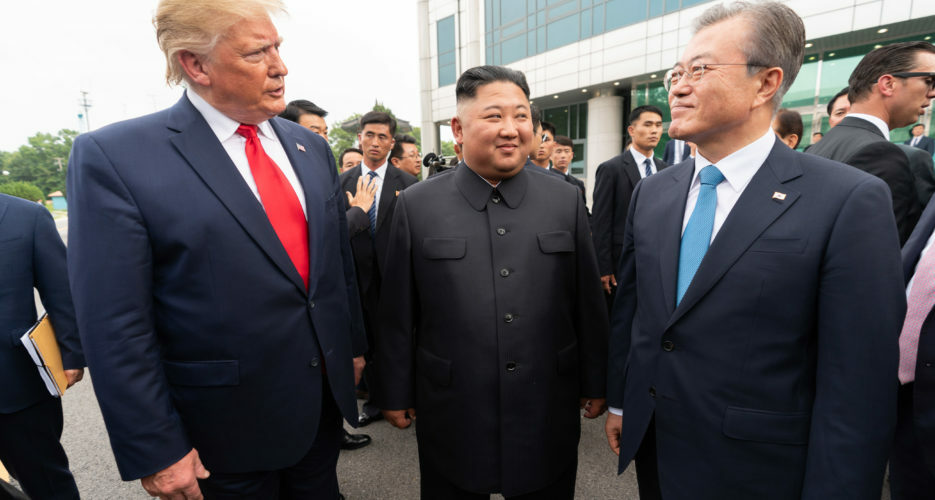 North Korea has “made clear” that it remains open to dialogue, South Korean President Moon Jae-in insisted in an annual press conference on Tuesday, expressing his support for a loosening of international sanctions that could allow inter-Korean economic projects to go ahead.

Speaking at the Blue House on Tuesday, Moon sought to project an optimistic view of prospects for denuclearization talks, emphasizing that the North has continued to express its openness to hold talks even after the expiration of previously-set year-end deadline for diplomacy to produce results.

“It was a concern that dialogue between the North and the U.S. would be disrupted when the year-end deadline expired, but North Korea still did not close the door on dialogue after the deadline passed,” he said.

But while that letter prompted some to speculate that a return to long-stalled diplomacy between Pyongyang and Washington might be imminent, the DPRK over the weekend insisted that Kim Jong Un’s good feelings about his U.S. counterpart are purely “personal.”

Despite this, President Moon on Tuesday sought to place a positive spin on the recent leader-to-leader communication, pointing to the swift delivery of the note as evidence that North Korea remains open to talks.

“North Korea received the letter and responded immediately,” he said, describing it as having “reemphasized the personal relations between the two leaders.”

“North Korea sanctions itself are not the goal,” said Moon. “The goal of the sanctions is to induce North Korea towards denuclearization.”

International sanctions would limit how much South Korea can achieve in terms of inter-Korean cooperation, he said, but stressed that independent tourism, as well as border-area and sports-related exchanges, would not be prohibited.

“Inter-Korean relations is our problem, so we have to have a willingness to make progress a little more independently,” Moon said.

It is unclear, however, how the two Koreas will discuss prospects for joint tourist projects, given Kim Jong Un’s order late year to demolish South Korean-owned property at the Mount Kumgang resort and a now almost-year-long impasse in talks between the two.

Seoul’s Ministry of Unification (MOU) last week said that it was seeking “diverse” ways to facilitate greater inter-Korean travel, including a proposal which could see South Koreans be issued visas to visit the North.

President Moon also on Tuesday underscored the importance of “corresponding measures” from the U.S. and the international community in exchange for what he described as North Korea’s “substantive steps” towards denuclearization.

Moon’s New Year’s press conference comes two weeks after North Korean leader Kim Jong Un’s own address to a landmark ruling party plenary meeting — a speech in which he made no references to inter-Korean relations.

The South Korean President on Tuesday dismissed Pyongyang’s cold-shoulder, suggesting that, for Seoul, no news is good news.

“If we look at North Korea’s message closely, it is making it clear that denuclearization talks is a matter between the North and the U.S., but there has been no message at all that they are rejecting progress in inter-Korean relations or the dialogue for inter-Korean cooperation.”

North Korea has "made clear" that it remains open to dialogue, South Korean President Moon Jae-in insisted in an annual press conference on Tuesday, expressing his support for a loosening of international sanctions that could allow inter-Korean economic projects to go ahead.Speaking at the Blue House on Tuesday, Moon sought to project an optimistic view of prospects for denuclearization talks,