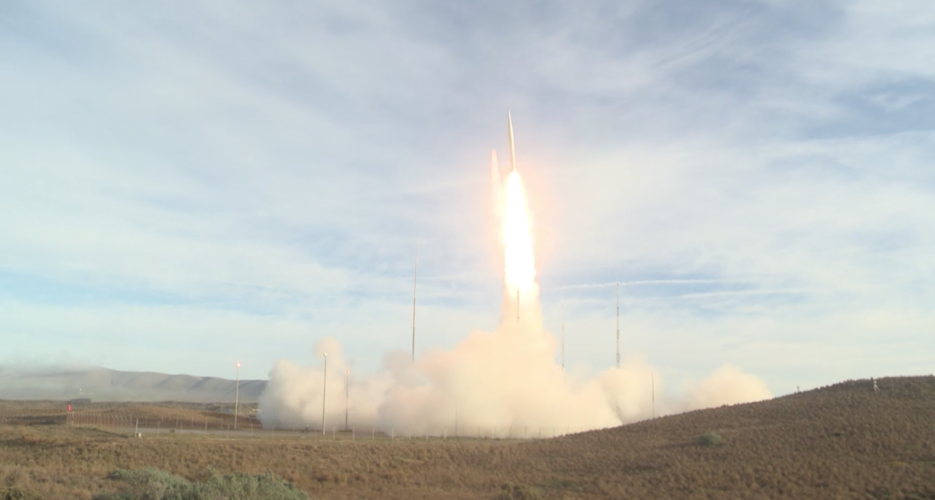 The U.S. Air Force tested a previously banned ballistic missile over the Pacific Ocean on Wednesday, according to an announcement from the Department of Defense.

The Pentagon described the weapon as a “conventionally-configured ground-launched ballistic missile,” and analysts say that the projectile likely would be barred under a Cold War-era arms control agreement that the U.S. left over the summer.

According to the Pentagon, Wednesday’s launch traveled farther than the INF Treaty would have allowed.

“The test missile exited its static launch stand and terminated in the open ocean after more than 500 kilometers of flight,” the Defense Department announcement said.

One expert told NK News that Wednesday’s test was the second time since leaving the INF Treaty that the U.S. had fired a previously banned missile.

The first was a cruise missile, launched in August.

“It’s the second nail in the coffin,” said Ankit Panda, an adjunct senior fellow at the Federation of American Scientists.

Trump pulled the U.S. out of the INF Treaty in August, after the Americans accused Russia of violating the agreement — a deal between Washington, Moscow, and numerous other countries — first.

According to the Pentagon, Wednesday’s launch took place at 8:30am, at Vandenberg Air Force Base in California.

One local news report said that a nearby resident’s home “rattled” from the launch, adding that she “ran outside to see what had happened.”

It remains to be seen how rattled leadership in Pyongyang will be from the launch as well.

The mid-December test comes with less than three weeks remaining before North Korean leader Kim Jong Un’s deadline for a deal with the U.S.

The two sides have been stuck in a diplomatic stalemate for weeks, ever since a rare face-to-face meeting between their envoys in early October ended with no apparent progress toward a deal, and heightened tensions all around.

In recent weeks, Trump and senior officials in the DPRK have taken to insulting and threatening each other — a sign that the relationship between the two countries may be regressing to its prior state in the pre-diplomacy era, when the two sides were threatening war.

Last weekend, Pyongyang conducted what it called a “very important” test at the country’s Sohae Satellite Launching Center, and on Monday, a top official, Ri Su Yong, warned that Kim Jong Un is still deciding his “final judgment” for how he will proceed with the Americans.

One expert told NK News that Wednesday’s test may not have been intended to send a message to North Korea.

The test, said Stephen Young, the Washington representative of the Global Security Program at the Union of Concerned Scientists, was “primarily a message to Russia” — the other major member of the INF pact.

But, Young added, “there are clearly implications for North Korea and China too.”

A Defense Department spokesman, Lt. Col. Robert Carver, told NK News that there is “nothing significant” in the timing of the launch.

“This was simply a time when the technology was ready to test,” he said.

According to Mintaro Oba, a former State Department official working on North Korea, whatever Washington’s intentions are with the test, they may not make much difference to Pyongyang.

“I don’t think it will really matter on North Korea,” he told NK News.

“Sure, if North Korea sees a rhetorical opportunity, it might seize on it in its statements, but the underlying reality remains the same: North Korea is using provocations and deadlines to pressure the United States to deal on its terms, and it will escalate if that serves its goals.”

The U.S. Air Force tested a previously banned ballistic missile over the Pacific Ocean on Wednesday, according to an announcement from the Department of Defense.The Pentagon described the weapon as a "conventionally-configured ground-launched ballistic missile," and analysts say that the projectile likely would be barred under a Cold War-era arms control agreement that the U.S. left over the