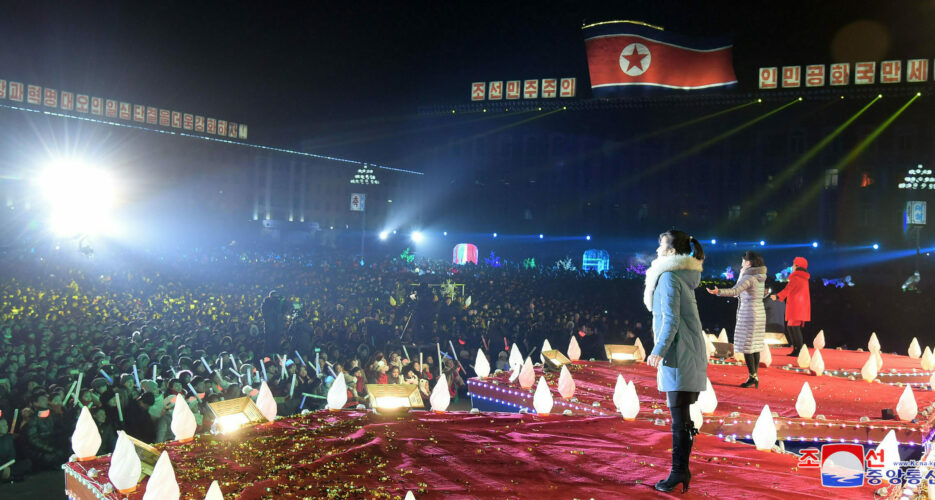 A large stage has been set up in recent days in the central square of the North Korean capital in preparation for New Year’s Eve celebrations, photos obtained by NK News show.

The event is expected to be similar to last year’s first-ever outdoor concert and light show also held in Pyongyang’s Kim Il Sung Square, which featured appearances from various singers and artists including the locally well-known Moranbong Electronic Ensemble.

The stage, installed as early as December 24 according to daily medium-resolution satellite imagery provided by Planet Labs, has been set up in the same location as last year, in the center of the square, with crowds expected to fill the areas on all sides.

Large TV screens have also been set up again on either side of the stage, images from on the ground show, while it appears separate mobile stages which moved out through the crowd during musical performances may also be used again.

The annual Pyongyang Ice Sculpture Festival also appears to have begun in the square, according to one image, altogether signaling this year’s outdoor celebratory events in the square will largely mirror 2018’s.

While Pyongyang on New Year’s Eve has typically put on various concerts in indoor venues, the ice sculpture festival, and fireworks in the downtown area — attracting great numbers of the city’s residents outdoors to take part in festivities — 2018’s event was the first to include the outdoor concert and drone light show.

For that event, celebrations kicked off on KCTV at around 23:30 local time, with 30 minutes of performances of well-known patriotic songs by various singers.

Just before midnight, small fireworks were launched above the stage counting down from nine to zero, followed by the traditional ringing of the “watch-night bell” played over loudspeakers throughout the square.

It was the first time, at least in this decade, that the broadcast featured the crowd audibly counting down — a staple in broadcasts around the world.

This and other elements suggested the goal of organizers was to emulate modern celebrations from other countries.

Other modern features in addition to the familiar fireworks show were a laser show and drone light show put on after midnight, forming shapes such as the national Pungsan dog, the year 2019, and the words “Happy New Year” in Korean.

But while there was also no focus on praising leader Kim Jong Un in the performances, they were still heavily focused on other state propaganda icons such as the Juche tower representing self-reliance and the national flag.

Details of Tuesday night’s show have yet to be revealed to western tour operators who are in Pyongyang with tourist groups and who expect to take part in the celebrations at Kim Il Sung Square.

He also said it has yet to be confirmed if the Moranbong Electronic Ensemble (called the Moranbong Band until late 2018) will appear again as in last year’s show, though locals are reportedly expecting another headlining appearance.

The event officially lasted until around 00:40 according to the KCTV broadcast, suggesting Tuesday’s could be of a similar length.

Updated at 18:00 KST: North Korean state TV announced during its 17:00 news broadcast that Tuesday night's New Year's Eve events in Kim Il Sung Square are scheduled to begin at 23:00 local time.A large stage has been set up in recent days in the central square of the North Korean capital in preparation for New Year’s Eve celebrations, photos obtained by NK News show.The event is expected 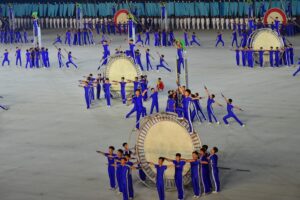