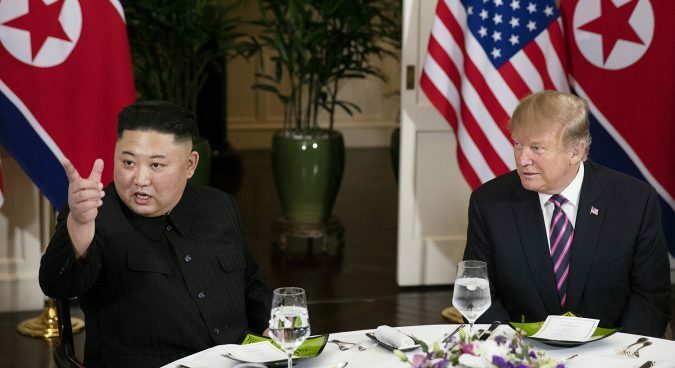 The issue of denuclearization is now off the table in any future talks between the U.S. and North Korea, the country’s ambassador to the UN said in a statement on Saturday, condemning the U.S. for what he viewed as its continued “hostile policy” against it.

In a statement distributed by North Korea’s mission to the UN to media, permanent representative Kim Song lashed out at a joint statement last week by European members of the UN Security Council (UNSC) condemning a recent missile test by the DPRK.

Accusing the U.S. of having secretly orchestrated that vote, and EU states of working as “pet dog” for Washington, Kim said it represented a “serious provocation.”

“If these countries are truly interested in resolving the issue of the Korean peninsula, they should call a spade a spade to the United States which persistently pursues the hostile policy towards the DPRK,” he said.

Dismissing calls by Washington for North Korea to return to talks as a “time saving trick,” Kim said the U.S. was seeking to exploit the issue for its “domestic political agenda.”

“We do not need to have lengthy talks with the U.S. now and the denuclearization is already gone out of the negotiation table,” he said.

Kim’s comments come amid growing tensions between the U.S. and North Korea, with Pyongyang’s self-declared end of year deadline for diplomacy to produce results fast approaching.

Following remarks last week in which he appeared to flout the possibility of military action against North Korea, top officials from the country’s military and foreign ministry warned against renewed “confrontation” between the two nations.

A statement by an official from the foreign ministry last Tuesday, too, warned that the U.S. will soon need to decide what kind of “Christmas gift” it will receive from North Korea.

“[The DPRK] feels no need to hide what it will do from now on and therefore, reminds the U.S. once again that the year-end time limit comes nearer,” vice foreign minister Ri Thae Song was quoted as having said.

Following the talks, the Blue House said the two had agreed that “dialogue momentum should be maintained to achieve prompt results from denuclearization negotiations.”

Speaking at the White House later in the day, President Trump then told reporters he did not believe North Korea would seek to escalate tensions in the run-up to the 2020 Presidential elections.

“We’ll see about North Korea. I’d be surprised if North Korea acted hostilely,” he was quoted as having said at the White House, reiterating his “good relationship” with Kim Jong Un.

“I think we both want to keep it that way. He knows I have an election coming up. I don’t think he wants to interfere with that,” he continued.

Just hours after Trump’s remarks, North Korea then announced a “very important” test had been conducted at the Sohae Satellite Launching Ground, the first to take place at that site in over two years.

The issue of denuclearization is now off the table in any future talks between the U.S. and North Korea, the country's ambassador to the UN said in a statement on Saturday, condemning the U.S. for what he viewed as its continued "hostile policy" against it. In a statement distributed by North Korea's mission to the UN to media, permanent representative Kim Song lashed out at a joint statement