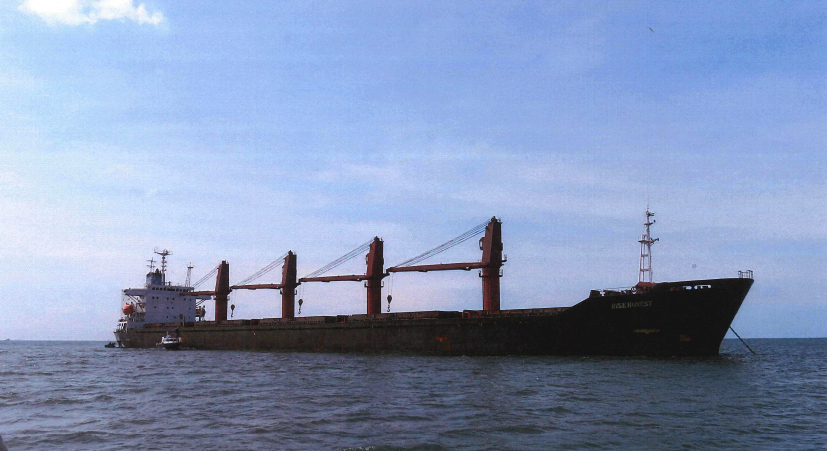 A federal court issued a judgment of forfeiture on Monday evening in New York against the Wise Honest, a notorious North Korean-flagged ship that had evaded U.S. and UN coal sanctions in the DPRK, according to an announcement from the U.S. Department of Justice.

The ship, which had been caught trafficking thousands of tons of North Korean coal worth millions of dollars in exchange for heavy machinery, was the first DPRK cargo vessel to be seized for international sanctions violations.

Monday’s judgment from the Southern District of New York (SDNY) marks the end of a multi-year effort to catch the ship and ultimately end its use as a cargo vessel.

“This order of forfeiture sinks the Wise Honest’s career as one of North Korea’s largest sanctions-busting vessels,” said Assistant Attorney General for National Security John C. Demers, according to the Justice Department’s announcement.

The court ordered the ship to be forfeited to the U.S. government, and ordered the Treasury Department to then “dispose of” it.

The Wise Honest had previously been held in American Samoa for several months, and Monday’s judgment comes less than two weeks after the ship left the territory’s capital, Pago Pago, on its way to a then-unknown location.

Rumors swirled that the ship was going to be sold for scrap, with the proceeds going to the family of Otto Warmbier, an American college student whose detention in North Korea and subsequent death in 2017 sparked an uproar in the U.S.

The Warmbier family, along with the family of Kim Dong Shik — a pastor alleged to have been kidnapped, tortured, and killed in North Korea in 2000 — had been awarded a settlement in federal court worth hundreds of millions of dollars, meant to be paid to them by the DPRK government.

It appears from the court document released Monday that both families had filed petitions with the SDNY to collect some portion of the assets related to the Wise Honest after it was seized.

The court document released Monday says that the families had “resolved” their petitions with the government, with the DOJ announcement thanking the Warmbiers “for their willingness voluntarily to withdraw their claim in the action in order to facilitate the forfeiture of the Wise Honest.”

The announcement did not mention the Kim family.

It is unclear if either family will receive a payment related to the seizure of the ship, and the Department of Justice did not respond to inquiries about the Wise Honest or the two families.

The Wise Honest was first detained in April 2018 by Indonesian authorities when it was caught preparing to engage in an illegal ship-to-ship transfer of goods — a maneuver often used by DPRK-linked vessels to evade sanctions.

The ship had turned off its automatic identification system (AIS), the tracking system freighters use to avoid collisions on the open water, likely in order to escape detection.

The case of the Wise Honest drew widespread attention to the varied methods used in North Korea to evade sanctions, but the seizure of the ship does not appear to have ended any of those practices.

A report released last month by the UN Panel of Experts (PoE), the UN body that oversees sanctions enforcement, stated that North Korea continues to use boats to violate sanctions and that ship-to-ship transfers “continued unabated.”

A federal court issued a judgment of forfeiture on Monday evening in New York against the Wise Honest, a notorious North Korean-flagged ship that had evaded U.S. and UN coal sanctions in the DPRK, according to an announcement from the U.S. Department of Justice.The ship, which had been caught trafficking thousands of tons of North Korean coal worth millions of dollars in exchange for heavy