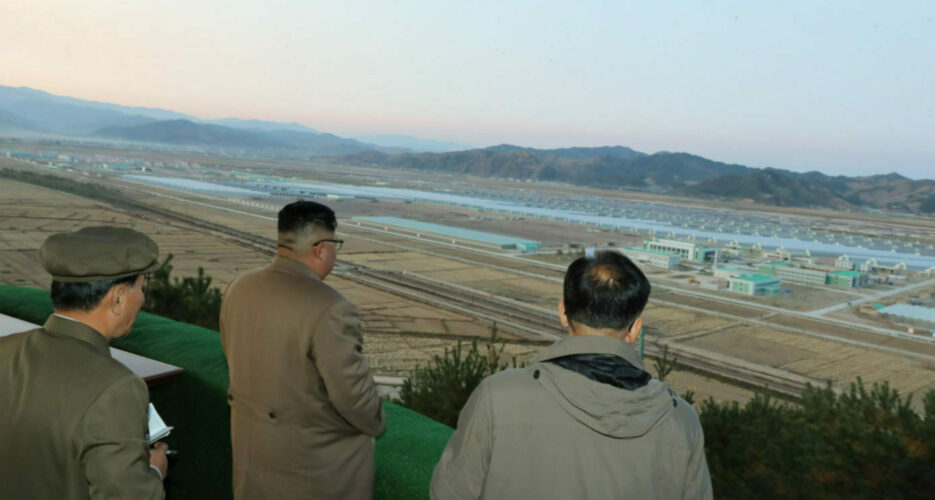 The project has been under development since July last year, when Kim was reported to have toured the area “with the idea of building a large-scale vegetable greenhouse farm in it.”

Referred to as the Onpho Greenhouse Farm since a subsequent visit by Kim Jong Un in August last year, the name of the project this week reverted back to use the original name of the district: the Jungphyong Vegetable Greenhouse Farm and Tree Nursery.

Analysis of satellite imagery by NK News’s sister site NK Pro in April revealed that work on the project — which appears to span a roughly 2.7-square-kilometer area — had picked up earlier in the year.

Quoted in state media on Friday, the DPRK leader said that “scores of hectares and a tree nursery with a capacity of 20 million tree saplings were built in this place.”

“Hundreds of low-storeyed dwelling houses for the employees, public buildings, school, kindergarten and nursery, hospital and all the public service installations stand in a row,” he noted, viewing the project from an observation post.

Describing the plans as crucial to the broader “improvement of the people’s dietary life,” the North Korean leader ordered that the farm “should make full preparations for running the greenhouses to produce vegetables simultaneously from the next year.”

Built on the site of an old airfield, state media has previously reported that the project stems from a spur-of-the-moment idea from Kim Jong Un.

Friday’s state media readout saw the DPRK leader reported to have said “with pleasure that creation of a thing out of nothing is a saying appropriate to the case.”

He also hinted at broader plans to expand the model across the DPRK, describing the project as “a revolution.”

“To build such a modern greenhouse farm in each province to supply various species of fresh vegetables to the people all the year round is a thing he has long wanted to do certainly,” the report said.

“It is necessary to put spurs to the building of state-of-the-art greenhouse farms on a nationwide scale from the point of view of practical utility and improve the dietary life of the people.”

He was reportedly accompanied by a number of top officials during the visit, including top adviser Jo Yong Won and sister Kim Yo Jong.

Kim’s name was, notably, listed second behind Jo’s, while the order had been reversed in other public appearances by the DPRK leader in recent months.

Friday’s visit comes amid a broader uptick of public appearances by the DPRK leader in recent weeks, with Kim having kept a notably lower-profile in the second half of September.

Last week saw Kim make his first public appearance in almost a month, touring a military-run farm on the outskirts of the country’s capital.

He was then on Wednesday reported to have scaled the country’s politically-symbolic Paektu mountain on a white horse, with state media hailing the move as a “great event of weighty importance” and that “a great operation to strike the world with wonder” was on its way.

North Korean leader Kim Jong Un this week toured a large-scale greenhouse project in the DPRK's north-eastern Kyongsong County, North Hamgyong Province, the Korean Central News Agency (KCNA) reported Friday.The project has been under development since July last year, when Kim was reported to have toured the area "with the idea of building a large-scale vegetable greenhouse farm in it."