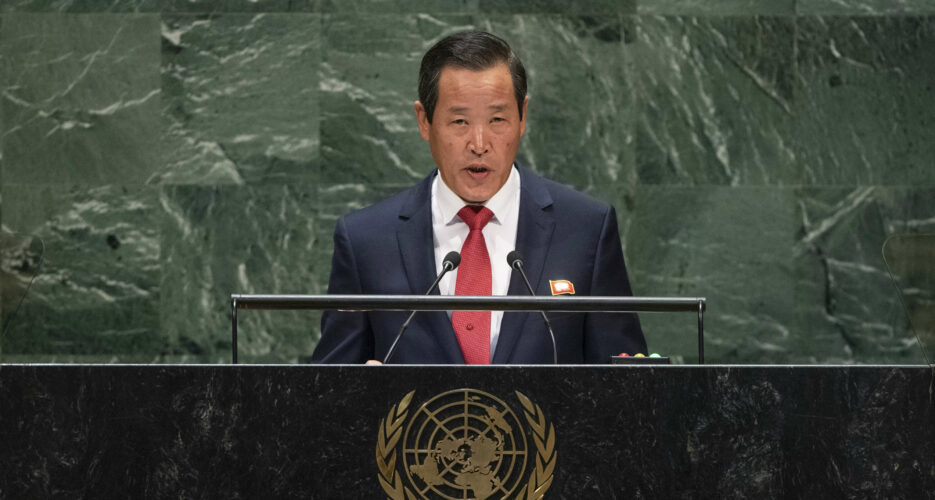 North Korea’s ambassador to the United Nations on Monday said his country regretted the slow progress made in talks with the U.S., in a speech in which he also slammed South Korea for the lack of improvement in relations.

Accusing Washington of continuing its “anachronistic hostile policy” against his country, DPRK ambassador to the UN Kim Song said North Korea and the U.S. were yet to end what he called the “vicious cycle of increased tension.”

“More than one year has passed since the adoption of the historic June 12 joint statement, however, the relations between the DPRK and the U.S. have made little progress so far,” he said in a speech to the 74th session of the United Nations General Assembly (UNGA).


This situation, he told UN delegates, “is entirely attributable to the political and military provocations perpetrated by the U.S.”

Citing leader Kim Jong Un’s April policy speech, in which he said he would wait for the U.S. to make a “resolute decision” about the future of diplomacy, ambassador Kim reiterated recent calls by Pyongyang for the two countries to hold working-level talks.

Those calls have, however, frequently urged the U.S. to produce a new proposal for their North Korean counterparts that moves beyond that presented at the failed summit between the two countries in Hanoi in February.

“Assuming that the U.S. has had enough time to find out a calculation method that can be shared with us, we expressed our willingness to sit with the U.S. for comprehensive discussion of the issues we have deliberated so far,” Kim said on Monday.

“It depends on the U.S. whether the DPRK-U.S. negotiations will become a window of opportunity or an occasion that will hasten the crisis.”

Despite these challenges, Kim also hailed recent progress in North Korea’s economy and military — developments, he said, the country would not negotiate away.

“We have solid foundations of self-supporting economy, reliable scientific and technical forces and invaluable tradition of self-reliance; these are our precious strategic resources which cannot be bartered for anything,” he said.

Kim’s speech, while relatively moderate in criticism of the U.S., reserved some of its harshest comments for South Korea, blaming the Moon administration for the lack of progress in implementing last year’s agreements between the two.

“The historic inter-Korean declarations… are now in the standstill without even advancing into the main phase of implementation,” he said.

Reiterating frequent recent North Korean complaints about the South’s decision earlier in the year to acquire and deploy new stealth fighter jets and to push ahead with a round of joint military drills with the U.S., Kim accused Seoul of “double-dealing behavior.”

These measures, Kim said, represented a “flagrant violation and challenge” to an inter-Korean military agreement signed in Pyongyang last year.

“The improvement of inter-Korean relations can only be achieved when the South Korean authorities put an end to the big-power worship and the policy of dependence on foreign forces,” he claimed.

Ambassador Kim’s appearance on the UNGA stage was noteworthy, with this week marking the first time in several years that the country’s foreign minister has chosen not to address the assembly.

NK News learned last month that North Korean foreign minister Ri Yong Ho would not be attending the UNGA, partly dashing hopes that the U.S. and the DPRK might use the forum as a chance to kick-start long-stalled working-level talks.

Those talks are now expected to take place in October, though a concrete time and location is yet to be confirmed.

North Korea's ambassador to the United Nations on Monday said his country regretted the slow progress made in talks with the U.S., in a speech in which he also slammed South Korea for the lack of improvement in relations.Accusing Washington of continuing its "anachronistic hostile policy" against his country, DPRK ambassador to the UN Kim Song said North Korea and the U.S. were yet to end what