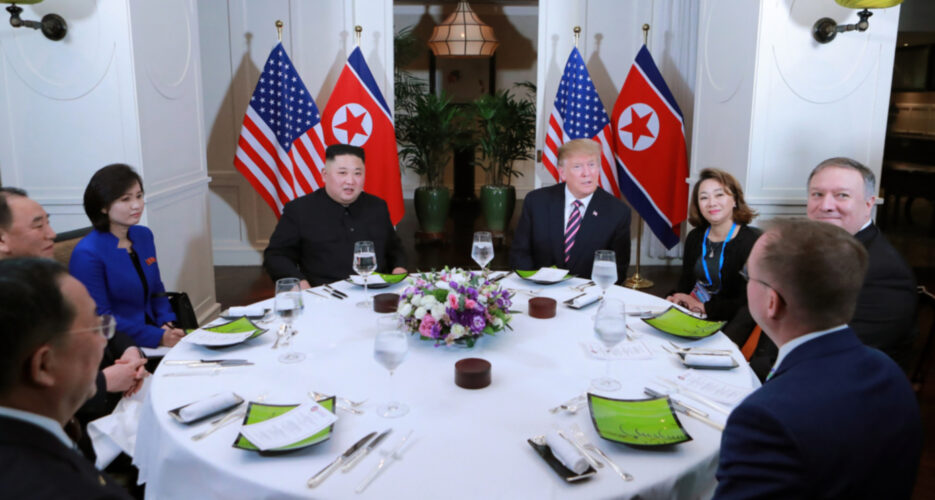 North Korea is optimistic that the U.S. will bring the “right calculation method” to upcoming working-level talks, the country’s new chief negotiator said in a statement on Friday.

The comments, delivered by the foreign ministry’s “roving ambassador” Kim Myong Gil, come in response to remarks by U.S. President Donald Trump on Thursday in which he expressed an openness to embracing a “new method” in nuclear negotiations with the North.

Those remarks also saw Trump distance himself from his former National Security Advisor John Bolton, who he had previously criticized for proposing the so-called “Libya Model” as an example for North Korea.

“I read the report that President Trump pointed out the iniquity of the method of ‘Libya-style nuclear abandonment’ and contended a ‘new method’ to improve DPRK-U.S. relations with interest,” Kim said in a statement carried by the Korean Central News Agency (KCNA).

Introducing himself as the “chief delegate” of the DPRK-U.S. working-level negotiations — in what appears to be the first time he has been officially named in the role — Kim praised Trump for his comments.

“I welcome President Trump’s wise political decision to approach the DPRK-U.S. relations from a more practical point of view,” he said, describing Bolton as a “burdensome troublemaker, who handled everything sticking to an outdated framework.”

“If the former shilly-shallying U.S. administrations with a rigid way of thinking were still in power, an uncontrollable situation would doubtless be created on the Korean peninsula, and no one would deny that this would come to be a direct threat to the U.S. security,” Kim continued.

The statement also saw Kim say that while he positively assessed Trump’s remarks North Korea remains unsure about what, precisely, this “new method” will involve.

“I believe it appears to be the intent that the best option is that both the DPRK and the U.S. solve feasible matters first, one by one in stages, while building confidence in each other,” he said.

Friday’s statement comes amid what appears to be a more flexible position from the U.S. ahead of expected working-level talks with the North — and hints that Washington may be increasingly willing to accept a so-called “small deal” with Pyongyang.

Choe’s statement did, however, warn that if Washington offered no new “calculation… DPRK-U.S. dealings may come to an end.”

Another senior foreign ministry official — likely head of the Department of American Affairs Kwon Jong Kun — earlier this week also said the U.S. would need to bring an “alternative proposal” to the upcoming talks if they were to succeed.

But Friday’s statement appears to suggest the DPRK’s concerns may have been partly allayed, and that Pyongyang is confident the talks — yet to be formally confirmed by the U.S. — will go ahead.

Trump, the North Korean chief delegate said, is “clearly aware” that the two countries will not be able to resolve the nuclear issue using “obsolete methods,” and is now attempting a “new alternative.”

“The political decision, which former U.S. chief executives never thought of or were unable to do, is the manifestation of President Trump’s distinct political sense and cast of mind,” he said.

“I expect that the U.S. side will come to the DPRK-U.S. negotiations which will proceed henceforward with the right calculation method, and I would like to take an optimistic view of the outcome.”

“North Korea’s positive reaction to Bolton’s dismissal and Trump’s ‘new method’ comment seems intended to signal to the U.S. that it is now ready to return to talks and that it has higher hopes for a ‘new calculation’ from the U.S.,” Minyoung Lee, a senior analyst with NK News‘s sister site NK Pro, said.

“More importantly, the fact that this was issued in the name of the DPRK top negotiator himself seems intended to underscore DPRK commitment to return to the talks.”

But despite Trump’s comments on Thursday, one expert said, Friday’s comments suggest the U.S. may need to present a concrete proposal before working-level talks can go ahead.

“This statement contains much of the same of what North Korea has been saying for months. First, the ball’s in your court, propose something. Second, we like Trump, but distrust the people and institutions around him,” Andray Abrahamian, Adjunct Senior Fellow at Pacific Forum, told NK News.

“Still, it’s signaling that with Bolton gone, things might progress more easily,” he said. “Importantly, the U.S. side has been frustrated that the North Koreans haven’t been willing to engage in dialogue recently and this statement does say talks are possible.”

“But it also seems to suggest that the U.S. side needs to send a proposal their way.”

North Korea is optimistic that the U.S. will bring the “right calculation method” to upcoming working-level talks, the country's new chief negotiator said in a statement on Friday.

The comments, delivered by the foreign ministry's "roving ambassador" Kim Myong Gil, come in response to remarks by U.S. President Donald Trump on Thursday in which he expressed an openness to embracing a “new method” in nuclear negotiations with the North.