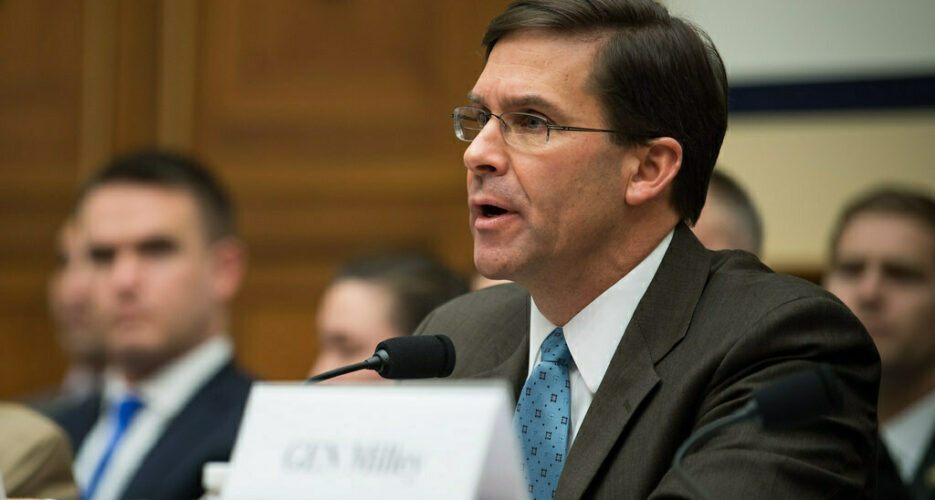 Washington’s new Defence Secretary Mark Esper on Wednesday said North Korea’s recent missile tests are a concern, though added that the U.S. would not overreact to launches.

Speaking at a Department of Defense press conference with Chairman of the Joint Chiefs of Staff Joseph Dunford, Esper said that a political agreement is the “best” way to achieve the DPRK’s denuclearization.

“Obviously, we are concerned about the short-range ballistic missile tests. We want to understand what they’re doing and why they’re doing it,” Esper told assembled reporters at the Pentagon.

“But on the other hand, we aren’t going to overreact. We want to take a measured response and make sure we don’t close the door to diplomacy.”

Esper’s comments match those of other senior high-level staffers in Washington, who have expressed limited misgivings with the recent launches and kept the door open to negotiations with Pyongyang.

North Korea has now launched short-range missiles from various weapon systems nine different times in 2019, with seven of the tests coming since July 25.

Both Esper and Dunford also weighed on the current status of the joint U.S. – ROK military exercises, which have been dramatically scaled back when compared with joint drills held two years ago.

“Two weeks ago when I was in Seoul, (General Robert Abrams)  and I talked about that. He feels that the training and exercise plan we currently have underway is sufficient to maintain our readiness on the peninsula with our ROK allies,” Esper said.

“Our exercises in the past were designed to do two things. Deter North Korea and enhance the readiness of our collective forces, combined forces. We made an adjustment to the posture of our exercise, the visibility of our exercises in support of the diplomatic effort to denuclearize the peninsula,” Dunford added.

The Joint Chiefs of Staff added that U.S. forces had found “other ways” of maintaining high levels of readiness but said that the new drills were less visible.

“We’re confident that the exercise and training program that we have in place right now will allow us to maintain the requisite level of readiness,” Dunford said.

North Korea recently said that the drills held earlier in August were “aggressive” and warned that South Korea would  “pay a painful price” for staging them alongside U.S. forces.

Pyongyang also claimed that its August 6 missile test was a “warning” to Seoul as South Korea and the U.S kicked off the exercises.

During Wednesday’s press conference, the two defense officials both expressed disappointment with Seoul and Tokyo’s recent decision to terminate an intelligence-sharing pact that helped the two sides exchange information on North Korea.

Seoul came to the decision last week that it would not renew its participation in the 2016 General Security of Military Information Agreement (GSOMIA), as relations between the two countries have nosedived over a trade dispute.

“I was and I remain very disappointed that both parties are engaged in this. I expressed that to my counterparts as I met with them in Tokyo and Seoul and of course, encouraged them, urged them to work it out,” Esper said.

“I am a half glass full person as well. I am hopeful that they will get beyond this because as I articulated to them, we have common threats facing us, North Korea and China, and bigger threats.”

The secretary of defense added the three countries need to get back on track so they can resolve the near term problem of North Korea and the longer-term challenges posed by China.

General Dunford added that he shared Esper’s disappointment in the dissolution of the pact, though said it had not yet an impact on military operations in the area.

“We have other ways of sharing information, but obviously not as effective as a very strong bilateral information-sharing agreement between the two countries,” Dunford told reporters.

“But there are other mechanisms in place to allow us to deal with an alliance crisis or contingency.”

Washington's new Defence Secretary Mark Esper on Wednesday said North Korea's recent missile tests are a concern, though added that the U.S. would not overreact to launches.Speaking at a Department of Defense press conference with Chairman of the Joint Chiefs of Staff Joseph Dunford, Esper said that a political agreement is the "best" way to achieve the DPRK's denuclearization."Obviously,