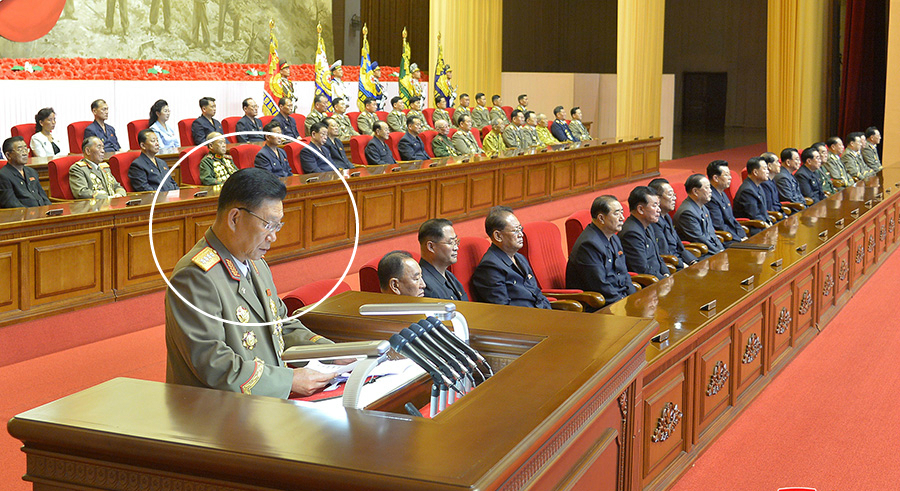 Japanese public broadcaster NHK said that a North Korean military delegation had arrived in Beijing on Friday, carrying a photo of Kim departing the airport.

DPRK defense minister No Kwang Chol, first vice director at the International Department of the Party Central Committee Kim Song Nam, and Chinese Ambassador to the DPRK Li Jinjun saw him off at Pyongyang airport earlier in the day, Kyodo News reported.

Neither Chinese nor North Korean state media have confirmed Kim’s visit to Beijing as of 19:00 local time.

His visit comes roughly two months after the fifth DPRK-PRC summit in Pyongyang, at which the two countries agreed to “maintain the tradition of high-level exchange” and “deepen exchanges and cooperation in each field.”

Both Kim Su Gil and Admiral Miao Hua, who serves as director of the Political Work Department of China’s Central Military Commission (CMC), were present in meetings at that summit.

Lee Seong-hyon, Director of Center for Chinese Studies at Sejong Institute, said the inclusion of Miao in Xi’s entourage during the fifth summit was a “clear political signal that China would begin its exchanges in the military field with North Korea.”

Although the attendance of a high-ranking military official at a summit is “normal,” he said, Miao’s presence was noteworthy in a light of the minimal military exchanges between Beijing and Pyongyang over the past decade.

“This is abnormal,” Lee told NK News, adding the two countries may have sought to further normalize military ties at their most recent fifth summit.

Exchanges between the two, he continued, are likely to begin at a lower-level, potentially through military training programs and KPA observation of military exercises conducted by Chinese People’s Liberation Army (PLA).

This is the first visit to China by a KPA delegation since April, according to DPRK state media.

That month saw a group led by Kim Myong Sik — who serves as commander of the KPA navy — attend celebration events to mark the 70th anniversary of the founding of the PLA Navy.

This week’s visit is not the first time the director of the General Political Bureau of the KPA has visited China in recent years, however.

In May 2013, North Korean leader Kim Jong Un dispatched Choe Ryong Hae — then serving as director of the General Political Bureau of the KPA — as a special envoy amid a diplomatic row between Pyongyang and Beijing.

Kim Su Gil accompanied Choe in his then-rank as a KPA lieutenant general.

Jo Myong Rok — who also served first vice-chairman of now-defunct National Defense Commission — earlier visited China in April 2003, a trip which notably overlapped with a trilateral meeting between China, North Korea, and the U.S. in Beijing.

The North Korean delegation’s visit this week comes ahead of two important anniversaries for the country, another expert noted.

“There are also two important days coming relatively soon: the 70th anniversary of the proclamation of the PRC on October 1 and the anniversary of the establishment of diplomatic relations between Beijing and Pyongyang on October 6,” Fyodor Tertitskiy, an expert on North Korean politics and the military, told NK News.

It is “very likely,” he said, that the two events could serve as an occasion for China and North Korea to expand cooperation.

“General Kim is responsible for conducting the celebrations within the KPA and the way they are to be conducted would be interpreted by China and by the rest of the world as sending a message.”

Broader Sino-DPRK exchanges have also been stepped up since the fifth summit between the two countries and amid a wider warming of ties, including a visit by a “friendly delegation” of the North’s Ministry of People’s Security (MPS) to China in July.

A delegation of the Information Department of the Chinese Ministry of Foreign Affairs led by Director-General Lu Kang, too, traveled to Pyongyang that same month.

Top North Korean military official Kim Su Gil is this week making a rare trip to China, Japanese and South Korean outlets reported on Friday.Kim serves as director of the General Political Bureau of the Korean People’s Army (KPA) and as a member of the Political Bureau of the Central Committee of the Workers’ Party of Korea (WPK) and State Affairs Commission (SAC).Japanese public