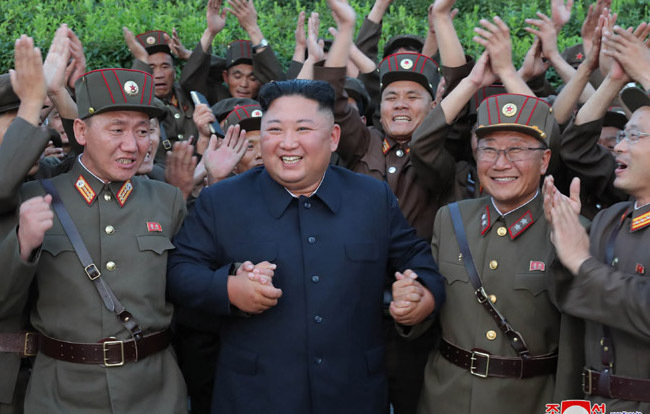 North Korean leader Kim Jong Un has ordered that 103 scientists in the field of national defense science receive promotions, state media said on Tuesday, in a reported reward for their efforts in bringing about a “turning point” in the country’s military capabilities.

Kim, who also serves as head of the DPRK ruling party’s Central Military Commission, was said to have used “Order No.008” to elevate the ranks of scientists who “have made great contributions to bolstering up the military capabilities for self-defense,” Korean Central News Agency (KCNA) said.

The party daily Rodong Sinmun also carried Kim’s order, carrying a list of names of the 103 scientists on its front page.

Among those granted promotions was Jon Il Ho — a frequent presence at Kim Jong Un’s side during a spate of recent missile tests — who was granted the title of three-star colonel-general.

Jon has been seen accompanying Kim Jong Un at all five test-launches of newly-developed weapons conducted between July 25 and August 10, as well as at the test-fire of a new tactical weapon on April 17.

The North Korean leader, it continued, had said the officials have “researched and developed new weapons systems with our own ability, wisdom, and technology.”

The scientists, he said, have “performed great feats… of sequentially developing and completing new powerful weapon systems which have the key importance in defending the party, the revolution, the country and the people.”

To that end, Kim said “reliable scientists” had offered crucial support for the decisions made at the Seventh Congress of the ruling Workers’ Party of Korea (WPK) in 2016 and the 8th Conference of the Munitions Industry the following year.

Those conferences came in the context of North Korea’s byungjin line, which stressed the parallel development of nuclear weapons and the national economy.

Recent weapons tests by Pyongyang have seen the North Korean leader hail their successes as the result of decisions made at those meetings.

During Kim’s guidance of the test-firing of a recently-developed “multiple launch guided rocket system” on July 31, the DPRK leader praised the fact that the country had developed and conducted the first test in a short period of time in accordance with orders given at the Seventh Congress.

The development of the weapon, the DPRK leader said, was in line with the “strategic policy of artillery modernization for building up military force.”

The 8th Conference of Munitions Industry was also explicitly mentioned during Kim’s April 17 guidance of the test-firing of a “new-type tactical guided weapon.”

The field of national defense science, Kim said, has worked to achieve the “core goals for research suggested by the party at the 8th Conference of Munitions Industry.”

Plans to “develop the DPRK-style weapon system which embodies four elements” were actively moving forward, he added, though did not elaborate further on what those four elements are.

State media reported in December 2017 that Kim had at munitions industry conference “set forth long-term objectives, primary objectives, strategic tasks, and important tasks to be fulfilled to develop the defense industry of the country.”

Speaking just a few weeks after Pyongyang’s successful test of the Hwasong-15 intercontinental ballistic missile (ICBM), the North Korean leader also laid out plans for “ushering in a heyday of development of a Juche-based defense industry.”

Tuesday’s announcement comes just a few days after Kim on Saturday praised the achievements of scientists in the field of national defense science and workers in the munitions industry.

Speaking during an on-site visit at a test-launch of a new weapon, the DPRK leader hailed them as “very grateful comrades who always relieve his heavy burdens and let him forget about difficulties and hardships.”

Rachel Minyoung Lee, a senior analyst with NK News’s sister site NK Pro, noted that “this seems to be the first reported military promotions for defense scientists,” while stressing “we always knew that key members of the DPRK defense science sector had a military rank.”

“This rare public endorsement of the defense science sector — only the second time after 101 scientists and engineers in December 2012 received the Republic hero title for the ‘successful’ launch of Kwangmyongsong-3 Unit 2 — is consistent with state media’s emphasis of defense scientists and the munitions industry over the past few months,” she continued.

“Also worth noting is the rising prominence of Jon Il Ho, director of the Kim Chaek University of Technology Automation Research Institute director, who accompanied Kim on all recent launches,” Lee added.

“He has been promoted to a three-star general, placing him on the same military rank as Jang Chang Ha.”

North Korean leader Kim Jong Un has ordered that 103 scientists in the field of national defense science receive promotions, state media said on Tuesday, in a reported reward for their efforts in bringing about a "turning point" in the country’s military capabilities.Kim, who also serves as head of the DPRK ruling party's Central Military Commission, was said to have used "Order No.008" to 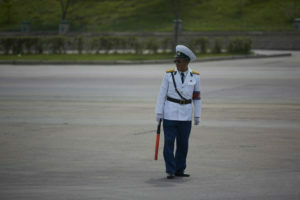