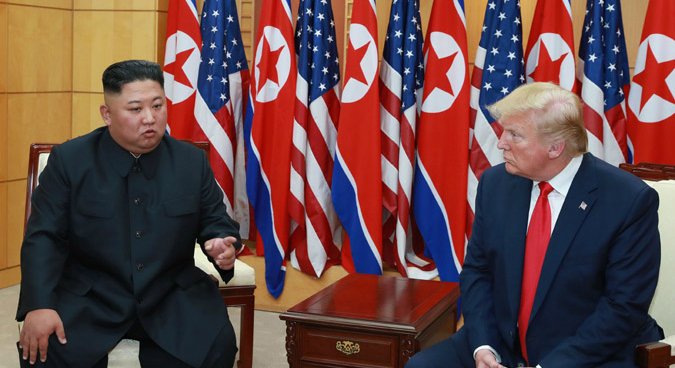 North Korea will respond with corresponding steps if the U.S. takes “sincere measures” that build trust between the two countries, an influential Tokyo-based pro-DPRK outlet argued in a commentary Friday.

The commentary, carried by the Choson Sinbo — the organ of the General Association of Korean Residents in Japan (Chongryon) — urges the U.S. to bring a “practical plan” to planned upcoming DPRK-U.S. talks.

The Choson Sinbo on Friday welcomed that decision, saying that the “right direction for working-level negotiations” had been set by the summit and that the two sides would not repeat the failure of their no-deal summit in Hanoi in February.

In the Korean-language commentary written by Kim Ji Yong, the newspaper called on Washington to “take the right attitude and present a new methodology” in order to show Pyongyang that it is negotiating in good faith.

“The DPRK is ready to take good-will corresponding actions if the U.S. takes sincere measures for confidence building,” it said.

“Fairness is the standard for judging the calculation method that the U.S. side will present in the future,” the media continued, echoing comments by North Korean leader Kim Jong Un in April.

That speech, delivered to the DPRK’s Supreme Assembly (SPA), saw Kim promise he would sign a deal with the U.S. “without hesitation only when it contains fair clauses” in line with mutual interests.

“If the [U.S.] cannot withdraw the hostility and threats — that pushed the DPRK to develop nuclear [arsenals] and ballistic rockets — at once,” Friday’s article said, it must “come forward with a practical plan that requires the other party to do as much as it does in accordance with the principle of step-by-step and simultaneous action.”

After the resumption of the DPRK-U.S. dialogue had been officially confirmed, the Choson Sinbo reported, there were “various conjectures” concerning U.S. plans for negotiations.

Biegun was last month quoted as having said the U.S. is prepared to “make progress simultaneously and in parallel toward the fulfillment of the commitments” made by the two countries at their first summit in Singapore in June last year.

The U.S., he said, is “ready to hold constructive discussions.”

But the Choson Sinbo said some outlet had “mislead public opinion” by claiming that clauses of the Singapore agreement, which included “building a peace regime on the Korean peninsula” could be only be discussed if the DPRK began “complete denuclearization.”

Describing this framing as the “vicious practice of hegemonists” that define certain agreements as “obligations” of the DPRK and others as “compensation measures,” the pro-Pyongyang outlet argued the joint agreement is the “common task of the two countries.”

“The ‘establishment of new DPRK-U.S. relations’ and ‘building peace regime’ are by no means a gift that the U.S. gives to the DPRK,” the media said.

“To achieve ‘complete denuclearization,’ the U.S. should do what they ought to do, including the removal of nuclear war threats against the DPRK,” it continued, stressing the “implementation of the Singapore Joint Statement is a process of the U.S. withdrawing its hostile policy toward the DPRK.”

The commentary comes as Washington and Pyongyang are expected to begin working-level negotiations in the coming week.

Secretary of State Mike Pompeo previously said he expected those talks would begin at some point this month, though a concrete date is yet to emerge.

Thursday saw second deputy chief of the National Security Office (NSO) Kim Hyun-chong say the ROK and U.S. are still awaiting an answer from the North Korean side.

The Choson Sinbo on Friday, however, expressed optimism about the upcoming talks, saying North Korean media coverage of last month’s summit was proof that the two leaders had agreed to a new approach in negotiations.

This new approach, it said, reflected Kim Jong Un’s April call for the two sides to “give up their unilateral terms and seek a constructive solution that meets each other’s interests.”

“The DPRK side’s report on the outcome of the Panmunjom summit suggests that there was an agreement to proceed with working-level negotiations in that direction,” the article said, pointing to state media quoting the leaders as having expressed “great satisfaction” over the meeting’s outcome.

North Korea will respond with corresponding steps if the U.S. takes “sincere measures" that build trust between the two countries, an influential Tokyo-based pro-DPRK outlet argued in a commentary Friday.

The commentary, carried by the Choson Sinbo — the organ of the General Association of Korean Residents in Japan (Chongryon) — urges the U.S. to bring a "practical plan" to planned upcoming DPRK-U.S. talks.