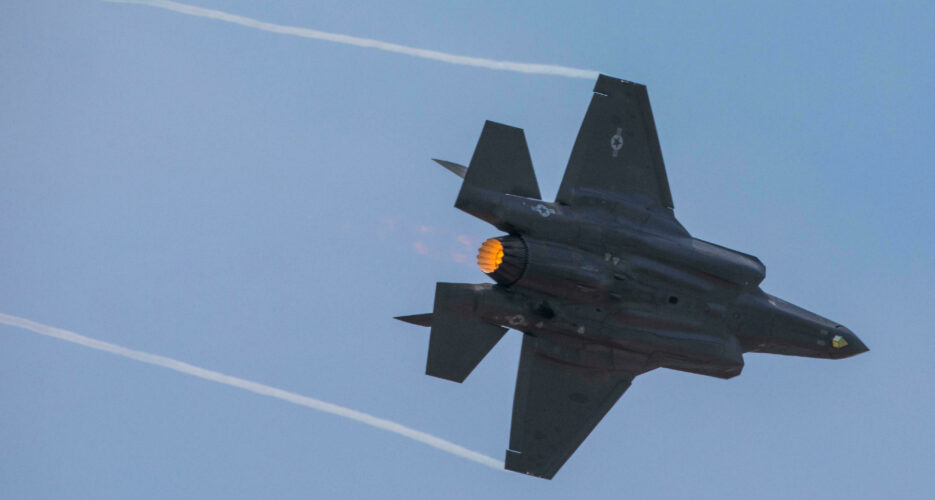 North Korea on Thursday warned that it would have no choice but to “develop and test” arms to wipe out the “lethal weapons” increasingly being deployed in South Korea.

In a statement denouncing Seoul for its recent acquisition of a number of new stealth jets from the U.S., an unnamed policy director at the foreign ministry’s Institute for American Studies said the move would serve to heighten tensions on the peninsula.

Two F-35A stealth fighter jets arrived at the South’s Cheongju Air Base in March, the ROK Defense Acquisition Program Administration (DAPA) said at the time, adding that a total of 40 jets will be delivered by 2021 in accordance with a 2014 deal.

In the press statement, the Institute for American Studies director said the stealth fighter is “called an ‘invisible lethal weapon” and claimed two additional planes were set to be deployed this month.

“There is no room for doubt that the delivery of ‘F-35A’ … is aimed at securing military supremacy over the neighboring countries in the region and, especially, opening a ‘gate’ to invading the North,” an English-language statement carried by the Korean Central News Agency (KCNA) read.

“We, on our part, have no other choice but to develop and test… special armaments to completely destroy the lethal weapons reinforced in South Korea.”

A concurrent Korean-language version of the statement reported that the reinforcement of military forces was taking “by force of circumstances” in the South.

The South Korean authorities have, it continued, “challenged” last year’s inter-Korean military agreement, which “expressly stipulates that the build-up of armed forces against the other side should be completely stopped.”

When contacted by NK News, an official at the ROK Ministry of National Defense declined to directly confirm local media reports that Seoul is set to receive two more F-35A stealth fighters this July.

“The plan to integrate F-35A fighters into the military force is proceeding without any difficulty, but we are not able to confirm the schedule of acquiring [the aircraft],” the MND official said, without rejecting local media coverage.

In the statement, the North Koreans accused Seoul of “lethal weapons that would harm the compatriots at a time when a positive atmosphere is created… thanks to the historic DPRK-U.S. summit meeting in Panmunjom.”

“I can hardly fail to ask the South Korean authorities whether this is an invention of ‘imaginative power beyond common sense’ clamored for by [Moon],” they said, a reference to recent remarks by the President that the recent summit was proof that “imagination that goes beyond conventional wisdom is needed to resolve a critical situation.”

Although Kwon’s comments targeted both Seoul and Washington, Thursday’s press statement focused on attacking the Moon Jae-in government — an unusual move by the foreign ministry, which typically does not deal with inter-Korean issues.

That is typically the job of the Committee for the Peaceful Reunification of the Country (CPRC) — responsible for inter-Korean relations — which led Pyongyang’s condemnation of Seoul’s scaled-back military drills in April.

The North on Thursday slammed the South Korean authorities for their decision to purchase the jets as part of an attempt to curry favor with the U.S. despite the fact it would “increase the military tension on the Korean peninsula.”

“The South Korean authorities are strange enough to live in such a way as to please the United States, their master, like eating mustard in tears,” it said.

In the Korean-language dispatch, Pyongyang warned that the purchase of the new stealth fighter jets will provoke its “resistance.”

The foreign ministry officials accused the South Korean government of being “imprudent and pitiful” in calling for inter-Korean reconciliation and cooperation.

Seoul must abandon “preposterous illusions that an opportunity will come for improved inter-Korean relations if they follow in the footsteps of the United States,” they said.

There is no hope for inter-Korean relations unless Seoul gives up its tendency to “make two steps backwards” when tensions with the U.S. arise and “making one step forward when there is any sign of improved DPRK-U.S. relations.”

“Inter-Korean relations cannot hold any prospect [for improvements] as long as the South Korean authorities do not avoid the fate of depending on outside forces.”

North Korea on Thursday warned that it would have no choice but to “develop and test” arms to wipe out the “lethal weapons” increasingly being deployed in South Korea.

In a statement denouncing Seoul for its recent acquisition of a number of new stealth jets from the U.S., an unnamed policy director at the foreign ministry's Institute for American Studies said the move would serve to heighten tensions on the peninsula.