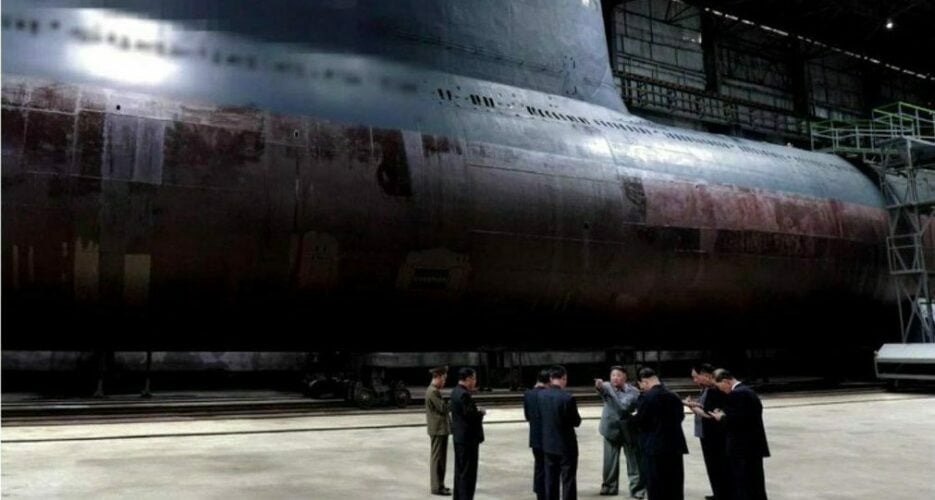 In an assessment shared during a closed-door briefing by the Ministry of National Defense (MND) to members of the National Assembly’s intelligence committee, officials were said to believe the submarine will be deployed soon.

“When we look at the pictures shared by North Korea, there are some mosaicked parts, and this part seems to be the location where the SLBM launcher is installed,” the MND was reported to have assessed.

The briefing came just hours after the North was reported to have launched two ballistic missiles off its east coast.

North Korea’s new submarine — believed to be a successor to the country’s Sinpo/Gorae-class ballistic missile submarine (SSBA) and dubbed the “Sinpo-C” — appeared in state media following a visit to an undisclosed factory by Kim Jong Un last Tuesday.

Speaking during that visit, the DPRK leader was reported to have “expressed great satisfaction” about the design and construction of the new vessel, describing it as an “important component in national defence of our country” and saying its deployment was “near at hand.”

“Making a round of the submarine, the Supreme Leader learned in detail about its operational and tactical data and combat weapon systems,” state media reported.

Lee said on Wednesday that the MND has also “judged [the submarine] to be in the pre-launch stage,” relaying the assessment that “it is possible it will be launched at sea soon.”

Seoul’s claims this week appear to track with earlier assessments by analysts that the submarine was likely designed to carry multiple submarine-launched ballistic missiles (SLBMs).

“I initially said four, but came down to three upon seeing measurements,” analyst Ankit Panda told NK News. “Three seems to be entirely realistic for that submarine.”

U.S. intelligence has for years believed that Pyongyang is currently seeking to expand its submarine fleet, with the specialist website 38 North earlier in the year reporting on satellite imagery suggesting construction was underway at the Sinpo South Naval Shipyard.

Satellite imagery obtained by NK News‘s sister site NK Pro last week revealed that the DPRK has also begun work on what was likely a new training center for submariners in the vicinity of that shipyard.

“It is more than likely that this new training facility will play a crucial role in training submariners for their new series of ballistic missile submarines,” Dave Schmerler, a Research Associate at the James Martin Center for Nonproliferation Studies, wrote.

In an assessment shared during a closed-door briefing by the Ministry of National Defense (MND) to members of the National Assembly's intelligence committee, officials were said to believe the submarine will be deployed soon.