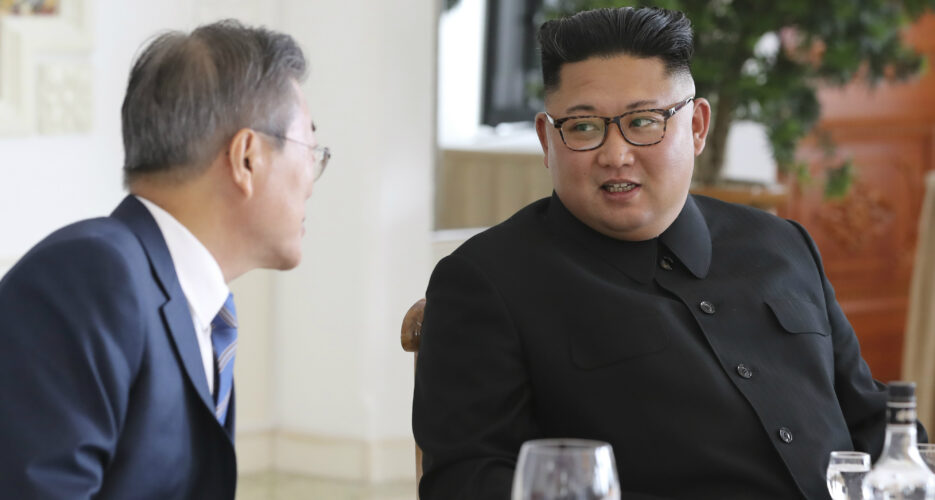 An official at North Korea’s foreign ministry on Thursday urged the U.S. to heed its “repeated warnings” about potentially withdrawing from nuclear negotiations, in a statement which also condemned the South Korean government’s recent attempts to mediate dialogue between Pyongyang and Seoul.

The Korean-language statement, carried by the Korean Central News Agency (KCNA), sees director general of the Department of American Affairs at the DPRK Ministry of Foreign Affairs (MFA) Kwon Jong Gun accuse the U.S. of “carrying out hostile acts against us more despicably than ever before in reality.”

Blaming an impasse in DPRK-U.S. nuclear negotiations on the U.S.’s failure to present Pyongyang “with realistic measures that correspond to mutual interests,” Kwon urged Washington to come to the negotiation table with the “right way of calculation.”

Reiterating comments by the North Korean leader in April, in which Kim Jong Un warned his country would wait until the end of the year for a breakthrough in talks, the MFA official said Pyongyang would need “impeccable alternatives” from Washington should it want to restart bilateral dialogue.

“Negotiations can be only held when [the U.S.] bargaining position should be proper, [North Korea] can only engage in negotiations with someone with a good sense of communication,” he said.

Kwon’s remarks also echo a statement issued by a spokesperson for the DPRK foreign ministry on Wednesday, which warned that Pyongyang and Washington would find it difficult to improve relations as long as “American politics are dominated by the policy-makers who have an inveterate antagonism towards the DPRK.”

“The U.S. had better bear in mind that our repeated warning is not merely empty talk,” Kwon warned Thursday.

HITTING OUT AT SEOUL

In its statement, the North Korean director general also said he would like to “say a word to South Korean officials who attempt to raise their value… as if they were mediating the relationship between the DPRK and the U.S.”

“The parties directly involved in the DPRK-U.S. talks are literally us and the U.S.,” he said. “It is not the matter in which the South Korean authorities can intervene, considering the origin of the DPRK-U.S. hostile relations.”

Pyongyang will never ask Seoul to play a role in bridging the gap between North and the U.S., the statement said, highlighting the good relations between U.S. President Donald Trump and North Korean leader Kim Jong Un. The two leaders were in the past week reported to have exchanged a series of letters.

“As the world knows, the DPRK-U.S. relations move forward based on a close relationship between our Chairman of the State Affairs Commission and the U.S. President,” Kwon said.

“If we have any issue with contacting the U.S., we can use communication channel that has been already in operation between the DPRK and the U.S.,” he stressed, adding that the DPRK “will never go through the South Korean authorities.”

“It almost seems as though the North used the first few paragraphs on the U.S. as a front to introduce what it really wanted to talk about: South Korea,” Minyoung Lee, a senior analyst with NK News’s sister site NK Pro, said.

This is the “North’s first official rejection of South Korea’s role in DPRK-U.S. dialogue,” she noted, adding that it “seems to reflect Pyongyang’s discomfort with President Moon’s recent comments on the prospects of a third DPRK-U.S. summit.”

“Pyongyang may feel Seoul is not being helpful to the DPRK-US negotiations process; it also sounds unhappy about what it views as Seoul stealing the spotlight from Kim Jong Un by playing up its role as a mediator.”

In Thursday’s statement, Kwon also denounced South Korean government officials for claiming that “dialogue between the North and the South are still underway through various channels.”

“Although the South Korean officials publicize that there is a variety of exchanges and behind-the-scenes talks between the two Koreas, no such thing exists,” the director general said.

The comments comes a day after President Moon told multiple outlets that the two Koreas have “diverse channels to sustain inter-Korean talks,” reiterating his commitment to meet the North Korean leader “at any given moment without being restrained by time, place or formalities.”

Lee, the NK Pro analyst, also pointed to the “highly unusual use of a foreign ministry vehicle to comment on South Korea.”

“It may be intended to downgrade South Korea in North Korean policy by framing Seoul and inter-Korean relations strictly in the context of DPRK-US relations,” she suggested.

“And it also may be intended to convey the message that the North does not feel it is worth using an outlet tailored specifically for inter-Korean relations — the Committee for the Peaceful Reunification of the Fatherland (CPRF) — to comment on South Korea,” she added.

An official at North Korea's foreign ministry on Thursday urged the U.S. to heed its “repeated warnings” about potentially withdrawing from nuclear negotiations, in a statement which also condemned the South Korean government’s recent attempts to mediate dialogue between Pyongyang and Seoul.

The Korean-language statement, carried by the Korean Central News Agency (KCNA), sees director general of the Department of American Affairs at the DPRK Ministry of Foreign Affairs (MFA) Kwon Jong Gun accuse the U.S. of “carrying out hostile acts against us more despicably than ever before in reality."