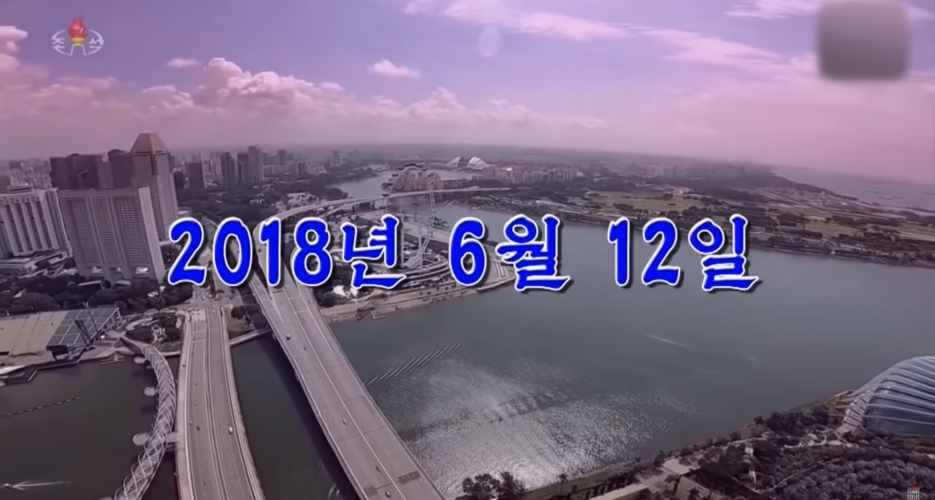 The rebroadcast marks the first time an official documentary of one of Kim Jong Un’s leader-level summits held since early 2018 has been re-aired on its one-year anniversary on the country’s primary television station.

It was also the first re-broadcasting of the program on the first-ever summit between a sitting U.S. President and DPRK leader since June 18 last year, according to a schedule database by South Korea’s Ministry of Unification.

The documentary aired at 2030 local time, having been announced in the on-air schedule earlier in the day, and remained unchanged at the same length as when it originally aired, at 42 minutes and 16 seconds.

A detailed scene-by-scene analysis shows that no edits were made to either the video or narration from the version originally aired on KCTV on June 14.

The documentary begins with the DPRK leader’s departure from the Pyongyang airport and landing in Singapore, showing aerial views of the “modern, developed” city-state and crowds of people lining walkways to catch a glimpse of Kim Jong Un.

As Kim is shown looking out over the skyline from the top of the Marina Bay Sands, the narrator says Kim “plans to learn a lot across various sectors” from the country’s “incredible knowledge and experience.”

The final half of the program is dedicated to the June 12 summit with President Trump, including their multiple meetings and signing of their Joint Statement.

The first opportunity to rebroadcast a major summit documentary came in late March this year, though the one covering Kim’s first summit with Chinese President Xi Jinping on March 26-27, 2018 was not aired on these days or surrounding days a year later.

Neither were documentaries rebroadcast on the anniversaries of his second summit with Xi held May 7-8, or either his first or second summits with South Korean President Moon Jae-in on April 27 and May 26.

But despite the renewed airtime for the documentary, other state media did not carry major commemorations on the Trump-Kim summit on the June 12 anniversary.

An article on the Singapore summit was carried on the last page of the party-run daily Rodong Sinmun on Wednesday, though it was focused on world news reaction to the meeting instead of specifically celebrating the anniversary.

Minyoung Lee, a North Korean media expert and analyst with NK News’s sister site NK Pro, called the rebroadcasting of the documentary “a low-key but effective way for Pyongyang to bring the Singapore summit back on everyone’s radar.”

“It likely enabled North Korea to remind its people of the significance of the event, while signaling to the U.S. that it still views the Singapore agreement as important and would like to resume dialogue,” she said.

Lee also said the decision “not to air re-runs of documentaries on Kim’s first and second summit meetings with Xi and Moon highlights the importance Pyongyang attaches to DPRK-U.S. relations.”

But while the documentary on Wednesday remained unchanged in its narration of a positive outlook on the Washington-Pyongyang relationship just after the summit in Singapore, the North’s dissatisfaction with the current state of affairs was expressed elsewhere in recent days.

The DPRK Ministry of Foreign Affairs (MFA) issued a statement published in the Rodong last week saying that “the fate of the June 12 DPRK-U.S. Joint Statement will not be promising if the U.S. fails to carry out its obligation and keeps resorting to anti-DPRK hostile policy.”

That MFA statement also called on Washington to take positive action first, while saying “there is a limit to our patience.”

The rebroadcast marks the first time an official documentary of one of Kim Jong Un’s leader-level summits held since early 2018 has been re-aired on its one-year anniversary on the country’s primary television station.