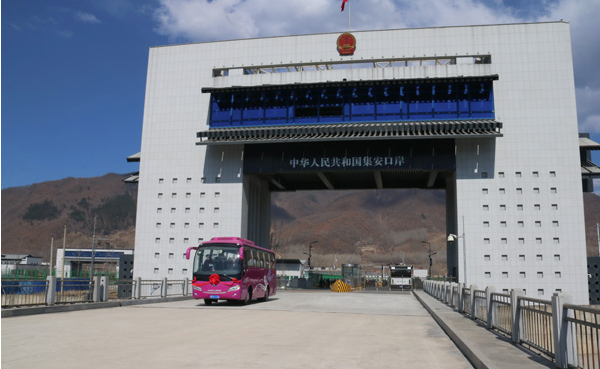 China and North Korea on Monday opened a new “highway port” border crossing in Ji’an City on the Sino-DPRK border, the local municipal government announced in a statement.

In a ceremony held in the presence of local officials, the bridge reportedly opened to the public this week, with 120 Chinese visitors then allowed to cross.

Municipal officials are reported to have spent 280 million Yuan ($41,696,200) on the new facilities, which span 102,800 square meters and feature a “guest inspections site, cargo inspection site, border inspection camp zone and… a scenic spot,” according to the statement by the local government.

The new crossing will link Ji’an to the North Korean city of Manpo, which lies across the Yalu River in Jagang province, and means the city can now serve as a “gateway for the country’s economic and trade cooperation with the DPRK.”

“The customs clearance time for import and export goods is from Monday to Friday. Entry and exit is from Monday to Sunday,” a concurrent statement by the Jilin provincial government reported, adding that it will be open seven days a week.

Customs facilities, too, are said to feature the “most advanced inspection equipment and facilities in China,” equipped with, among other technology, X-ray scanners and metal detectors.

“It is estimated that the annual import and export goods will be 500,000 tons and the number of entry and exit personnel will be 200,000,” the statement added.

The new crossing will also connect China to North Korea’s Manpo Economic Development Zone — first announced by the North in 2013.

Plans for a crossing connecting Ji’an to Manpo have been in the works for a while, too, with 38 North’s Curtis Melvin in 2015 reporting that the border bridge from Manpo to the Chinese side first appeared complete in imagery dated December 2012.

Progress on the PRC side, however, appeared slow, with increased signs of construction only beginning to appear in 2016.

Plans for the border crossing’s opening date appear to have been agreed to in a meeting between North Korean and Chinese officials in Ji’an last month.

In a meeting with Chinese counterparts, Ji was reported to have said he was “very happy” with the progress and that he believed its opening would “ensure the prosperity… and long-term stability of the border areas.”

In addition to what appears to be substantial investment by PRC authorities along several key border crossings last year, Chinese businesses also appear increasingly keen to step-up investment in the North.

One expert said the amount invested in the new facilities spoke to a broader warming of ties between the two countries.

“The Chinese have spent a sizable amount of money on this project, and this indicates that relations between the two sides have improved significantly,” Peter Ward, a writer and researcher on the North Korean economy, told NK News.

“It also may indicate an expectation that economic ties between the two sides will soon significantly deepen, i.e. sanctions relief.”

Another expert agreed, telling NK News the project represented “an outgrowth both of longer-term planning by both sides but also the more recent breaking of the dialogue logjam between Kim Jong Un and Xi Jinping.”

“Provincial cadre in Jagang and Jilin need to be able to have regular conversations and create something resembling a normal pattern of exchanges,” said Adam Cathcart, a lecturer in history at the University of Leeds and editor of Sino-NK.

“Tourists are of course the easiest part of the equation, since itineraries are easily cancelled or held back by either side,” he added.

“[But] if Manpo could get a boost by connecting further inland beyond Ji’an (which is really quite a small city) and to Tonghua, which is the real center of gravity in terms of population and industrial production in that part of Jilin, it could have positive effects.”

China and North Korea on Monday opened a new "highway port" border crossing in Ji'an City on the Sino-DPRK border, the local municipal government announced in a statement.In a ceremony held in the presence of local officials, the bridge reportedly opened to the public this week, with 120 Chinese visitors then allowed to cross.Municipal officials are reported to have spent 280 million Yuan