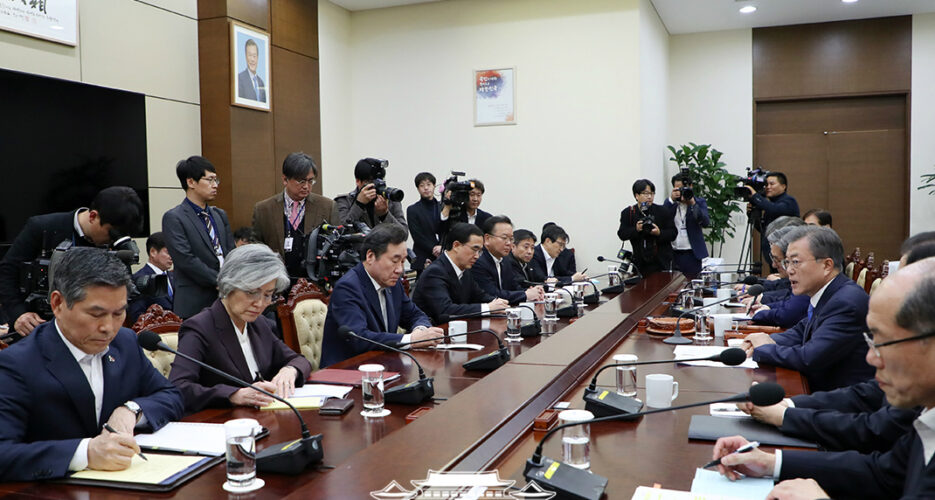 South Korea will push ahead with plans to hold 1.5-track talks between DPRK officials and experts as a means to resume now-stalled North Korea-U.S. negotiations “expeditiously,” the country’s foreign minister said on Monday.

Speaking at a meeting of the National Security Council (NSC) called by South Korean President Moon Jae-in in response to the surprise results of last week’s DPRK-U.S. summit, foreign minister Kang Kyung-wha said Seoul should take the lead in getting nuclear talks back on track.

“We need to have a detailed understanding on how both North Korea and the U.S. assess the current situation, and come up with a substantive plan of arbitration,” South Korean presidential spokesperson Kim Eui-keum quoted Kang as having said during her report to President Moon.

Kang also said the ROK Ministry of Foreign Affairs (MOFA) would “seek a variety of measures” to provide a platform for the resumption of DPRK-U.S. nuclear negotiations.

“Among various measures, we will push ahead with the plan to hold 1.5-track discussions based on the experience of such meetings between South and North Korea and the U.S. in Sweden,” she continued — a likely reference to tripartite talks in January between DPRK vice-foreign minister Choe Son Hui and ROK and U.S. counterparts Lee Do-hoon and Stephen Biegun in Stockholm.

Kang also said her ministry would push Pyongyang and Washington to resume dialogue “expeditiously” in cooperation with “countries which have an interest in the issue, including China and Russia.”

The South Korean foreign minister also said Washington and Pyongyang should use the talks to focus on the core issues of sanctions relief in exchange for the dismantlement of the Yongbyon complex and additional measures toward denuclearization.

The U.S. and the North had in their meetings last week, Kang said, come close to “an agreement on other measures including the establishment of liaison office and the end-of-war declaration.”

The NSC meeting convened by Moon was held between 1400 and 1540, and was the first of its kind since a meeting in June last year — also held in the aftermath of a DPRK-U.S. summit.

“In order to keep up the momentum of dialogue with the North, we will faithfully implement the military agreement of September 19,” Jeong was quoted as having said by a presidential spokesperson.

“By holding the inter-Korean military talks in March, we will devise practical measures to implement the military agreement of September 19 that is planned to be carried out within this year.”

Minister of Unification Cho Myoung-gyon on Monday stressed his ministry would seek ways to promote projects agreed to in previous inter-Korean declarations “within the framework of sanctions,” according to spokesperson Kim.

The Ministry of Unification (MOU) will also “prepare for the consultation with the U.S. after drawing up measures to resume” cooperation at the Kaesong Industrial Complex (KIC) and Mount Kumgang tourism.

Announcing his initiative for the “new Korean peninsula regime” on Friday, President Moon also said he planned to hold talks with the U.S. on ways to resume those two economic inter-Korean projects.

With regards to the North Korean situation, Cho on Monday said he expects Pyongyang to “go through the process of re-examining strategy against the U.S. and South Korea after assessing the outcome of the summit.”

During a discussion following the briefings by the three ministers, Moon stressed that Seoul’s “urgent priority is to make sure that both the U.S. and North Korea do not leave the track of dialogue before devising the plan to mediate.”

“It was difficult to get here, but it only takes a moment to collapse,” Moon told key aides, including presidential Chief of Staff Noh Young-min and director of National Intelligence Service (NIS) Suh Hoon.

“We will make the utmost efforts to make sure North Korea and the U.S. do not derail talks and have patience.”

South Korea will push ahead with plans to hold 1.5-track talks between DPRK officials and experts as a means to resume now-stalled North Korea-U.S. negotiations "expeditiously,” the country's foreign minister said on Monday.Speaking at a meeting of the National Security Council (NSC) called by South Korean President Moon Jae-in in response to the surprise results of last week's DPRK-U.S.