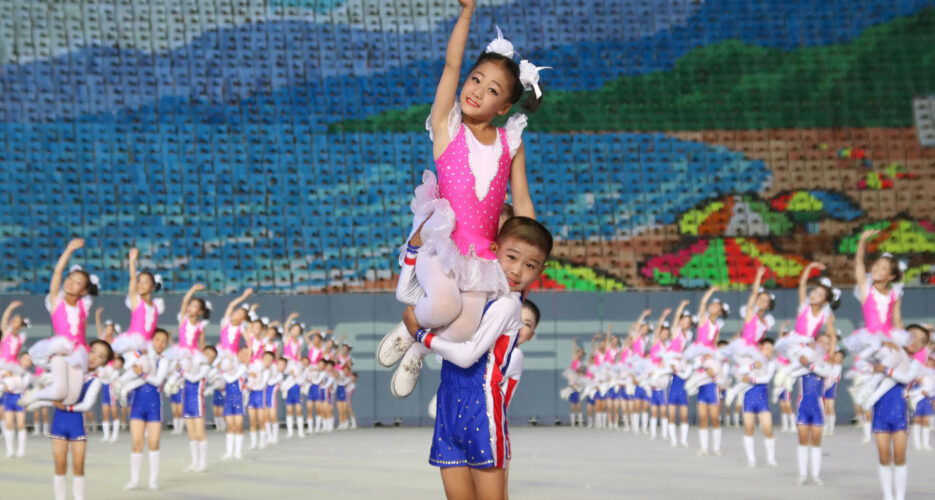 It is expected to begin this year “in September – and perhaps also over parts of August and/or October,” the tour company said in a blog post on its website.

The event was held last fall for the first time since 2013, running almost daily for an extended period of nearly two months under the new title “Glorious Country,” changing from the previous and more well-known “Arirang” title.

Last year’s updated event saw a number of new additions such as a drone light show and new performance elements.

It also, notably, omitted previously-seen references to the country’s long-range missile and space programs – a move seen as part of general efforts to tone down threatening rhetoric amid improving relations with the U.S. and South Korea.

The title for this year’s event has yet to be announced, but it is expected to once again take place in Pyongyang’s May Day Stadium, according to Koryo Tours.

Referred to as the “grand mass gymnastics and artistic performance” in North Korea, the event typically sees over 100,000 people ranging from young children to professional adults coordinating in dance and acrobatics, as well as making up a giant “human pixel” backdrop.

Last year, tour companies also announced the return of the event in March, while young students could be seen practicing routines in large outdoor spaces in the North Korean capital in May.

Students of all ages were seen taking part in mandatory practices for the mass games as well as a torch march to be held in Kim Il Sung Square multiple times per week over the summer, with sessions intensifying in the weeks before the first show and the march on September 9 to celebrate the official 70th anniversary of the country’s founding.

It was extended multiple times, running nightly most weeks before finally ending on November 5 with Kim Jong Un in attendance while hosting Cuban President Miguel Díaz-Canel as part of his official state visit.

The event attracts “large numbers of tourists, who are often unaware of the human rights violations endured by participating children, who are compelled to participate,” the report added.

North Korea, on the other hand, described the mass performance last year as a display of the “force of Juche Chosun’s single-minded unity and development of Juche arts and culture to boast to the entire world.”

The massive North Korean state propaganda event unofficially known as the “mass games” will return to Pyongyang this fall for the second consecutive year, general manager of Koryo Tours Simon Cockerell told NK News on Thursday.It is expected to begin this year “in September - and perhaps also over parts of August and/or October,” the tour company said in a blog post on its website.