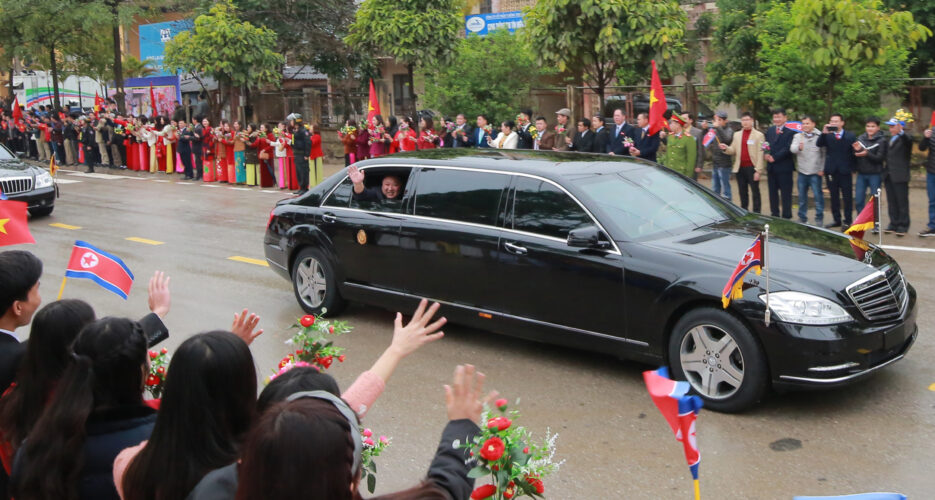 Kim “will meet with Donald J. Trump, president of the United States of America, to have the historic second DPRK-U.S. summit on Feb. 27 and 28 and will pay an official goodwill visit to the Socialist Republic of Vietnam on March 1 and 2,” Korean Central News Agency (KCNA) reported.

A previous KCNA report from Sunday as Kim departed by train from Pyongyang said Kim would “soon pay an official goodwill visit” to Vietnam where the “top leaders of the two countries will have a meeting and talks,” without providing the exact dates.

Trump and Kim are scheduled to meet for the first time since arriving in Hanoi at 1830 local time Wednesday evening at the Sofitel Legend Metropole Hotel, holding private talks before a “social dinner” joined by other officials.

The summit’s main event, including more meetings and the reveal of any potential agreement, is expected to begin on Thursday.

Kim “expressed his gratitude for the cordial hospitality and honorable treatment shown by the Vietnamese party, government and people,” it added.

The front page of Wednesday’s edition of party-run newspaper Rodong Sinmun carried the reports as well, showing a dozen photos of Kim arriving at the station and his motorcade driving through streets lined with flag-waving local residents.

Meanwhile, KCNA reported on Kim Jong Un’s arrival in Hanoi Tuesday and a meeting he held with top negotiators who have been in Vietnam since last week.

Kim “listened to the detailed report on the contact between the working delegations dispatched by the DPRK and the U.S. to Hanoi for the successful second DPRK-U.S. summit talks,” the report said, naming the Melia Hotel as his place of lodging for his stay in Vietnam.

Seen in an attached photograph of the meeting were two such negotiators, Special Representative for U.S. affairs from the State Affairs Commission Kim Hyok Chol and head strategy at the United Front Department (UFD) of the Workers’ Party of Korea (WPK) Kim Song Hye.

Sitting directly to Kim Jong Un’s left in the photograph is Choe Son Hui wearing a WPK badge on her lapel, and foreign minister Ri Yong Ho, two officials who traveled with Kim by train to Vietnam.

Another article in KCNA released early Wednesday detailed a visit by Kim to the DPRK embassy in Hanoi on Tuesday afternoon, where he “learnt about the work and situation of the embassy while talking with its members.”

The report said Kim “gave valuable instructions arising in thoroughly implementing the WPK’s foreign policy,” and quoted him as saying the embassy “should further consolidate the deep-rooted friendly and cooperative relations between the two parties and countries.”

The North Korean leader’s schedule for Wednesday prior to the dinner meeting with President Trump is yet to be released.

Trump, meanwhile, is scheduled to travel to the Presidential Palace in Hanoi for a series of meetings and a trade agreement signing ceremony beginning at 1100 local time.

Kim “will meet with Donald J. Trump, president of the United States of America, to have the historic second DPRK-U.S. summit on Feb. 27 and 28 and will pay an official goodwill visit to the Socialist Republic of Vietnam on March 1 and 2,” Korean Central News Agency (KCNA) reported.