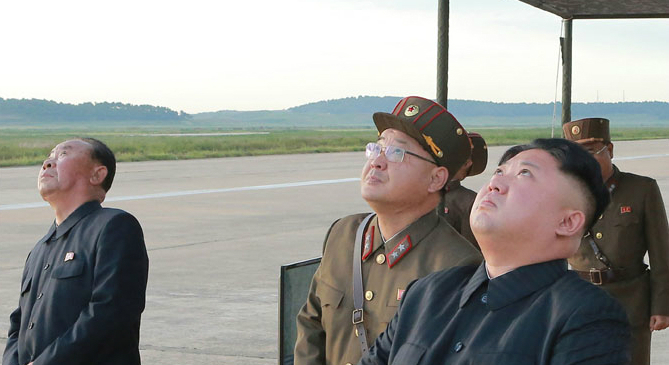 North Korea will not relinquish its nuclear arsenal until the regional “nuclear threat” from the United States is removed, Pyongyang’s official Korean Central News Agency (KCNA) said in a statement Thursday.

In a dispatch released amid a visit to the peninsula by Washington’s top North Korea negotiator Stephen Biegun and months of deadlocked nuclear talks, the DPRK blamed the U.S. for a lack of progress since July’s Singapore summit.

That meeting between DPRK leader Kim Jong Un and U.S. President Donald Trump – as well as two inter-Korean summits in April and September – saw North Korea commit to work towards the “denuclearization of the Korean peninsula.”

“The U.S. should recognize the meaning of the term ‘denuclearization of the Korean Peninsula,’ and should especially get right to work studying geography,” the statement reads.

“And when referring to the denuclearization of the Korean Peninsula, it should be understood that this means removing all nuclear threats, not only from North and South Korean territory, but also from the surrounding area aimed at the Korean Peninsula.”

While the U.S. removed all nuclear weapons from the Korean peninsula in 1991, South Korea and Japan remain under the protection of the so-called “nuclear umbrella,” as part of a broader strategy of extended deterrence in the region.

Thursday’s statement from North Korea suggests that Pyongyang now believes that any future negotiations over its nuclear weaponry would involve plans for the removal of this apparatus, as well as the withdrawal of United States Forces Korea (USFK) from the peninsula.

In terms of phasing, Thursday’s statement suggested that this would need to take place before the DPRK were to relinquish its nuclear arsenal.

It also stressed that Pyongyang continues to fear attempts at regime change by the U.S. should it relinquish its nuclear weapons.

“It is evident that if we unilaterally eliminate our security guarantees against a U.S. nuclear preemptive strike, it would not be considered denuclearization, but rather it will leave [us] defenseless and bring about a nuclear war crisis with the destruction of the two sides’ nuclear strategic balance.”

But it also suggested that the door remains open for dialogue, stressing that the denuclearization of the peninsula will only be achieved if “both North Korea and the U.S. work together.”

It also follows a similarly hardline statement by an official from the DPRK foreign ministry’s Institute for American Studies earlier in the week, in which it was argued that Washington’s position on sanctions could – according to Pyongyang – “block the path to denuclearization.”

Last month, too, that same organization threatened the U.S. with a resumption of nuclear development should sanctions relief not be forthcoming.

Editing and translation by Colin Zwirko

North Korea will not relinquish its nuclear arsenal until the regional "nuclear threat" from the United States is removed, Pyongyang's official Korean Central News Agency (KCNA) said in a statement Thursday.In a dispatch released amid a visit to the peninsula by Washington's top North Korea negotiator Stephen Biegun and months of deadlocked nuclear talks, the DPRK blamed the U.S. for a lack of